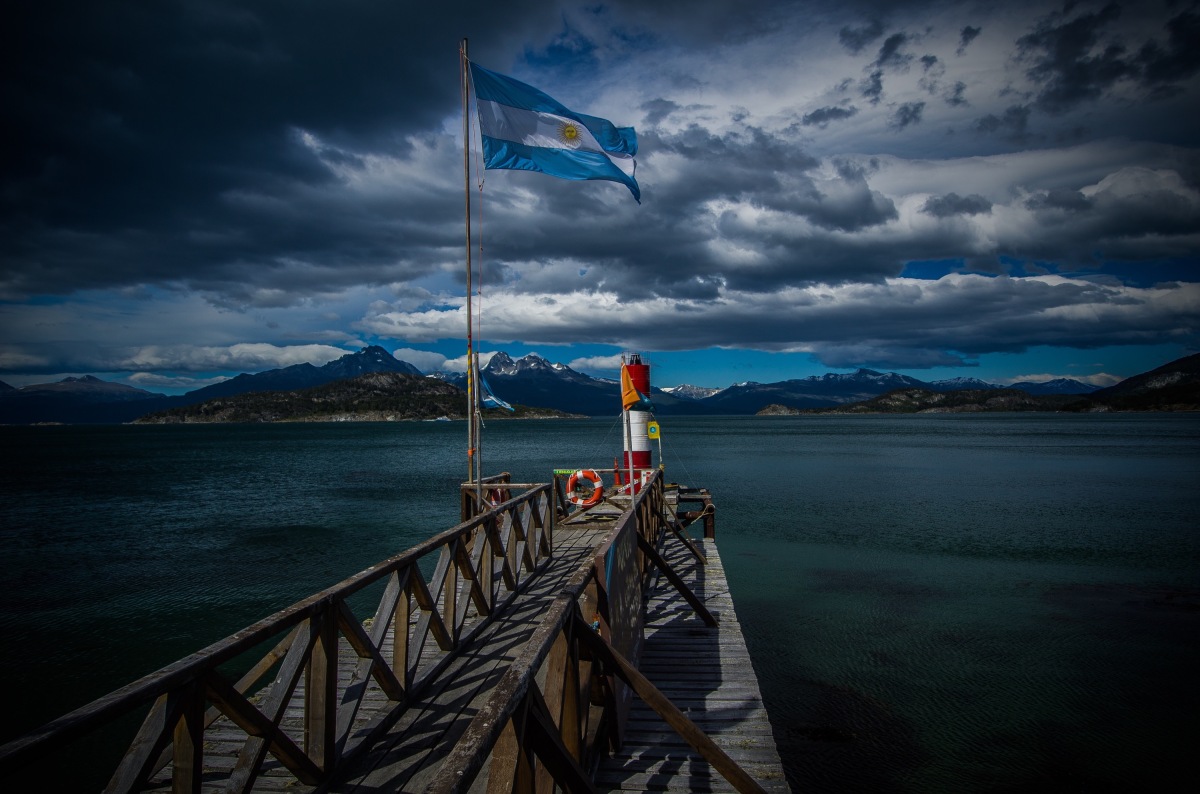 At the end of the world it’s time to have a little look and see what’s out there, out in the last reaches of where us humans are really meant to go. Strangely enough it’s not bitterly cold here, it’s summer of course but the temperate days bathed in sunshine are far more T-shirt weather than you’d expect if you pointed to Ushuaia on a map. All geared up for life more literally out of a backpack than the rest of this trip we are having a little walk along the shores of the Beagle channel, west from Ushuaia and within sight of Chile. This walk is quite literally just a little dabble into the wild, accommodation in Ushuaia is like good coffee around here; pretty much non existent so we’re heading off early to Punta Arenas in Chile a little earlier than planned. So with checklists at the ready we load up more food than we’re going to need and trundle off to see what lies at the edge of the world.

Jumping a little mini bus we are sardines squeezed in and off to the national park admiring the awesome ranges to the west and south as we bump along. Scratching around at our sketchy little walking map it seems that the bulk of those ranges are where we’re heading, exciting. It seems the Andes don’t quite sink into the ocean with quite the passive whimper that they seem to on the map, not the grandest peaks in the range to be sure but glorious enough for plenty of gawking. Amid the appreciation there is a small matter of pesky tourists, I mean the other tourists, of course were allowed to be tourists and the only ones at that, all others should really be somewhere else. This headspace is an easy trap to fall into, preaching the virtues of the wild, decrying human degradation of the natural world while insisting that we be the only ones permitted into that wild; good old middle-class hypocrisy. We all do it and it’s always a horrid expression.

The walk begins along the shores of the Beagle Channel and away from the throng of sixty-somethings pouring from buses like hornets from a disturbed nest. Thankfully there’s not an east coast US voice with the volume stuck on high among them so no gripes, but today is about being in nature so off we trek. The walk is a different one for us, less demanding and gently picturesque, the environment here engendering a less than usual desire to be alone in nature; happy to share the path today.

Reaching a branch in the channel we skirt Lapataia bay and it becomes apparent that many of the grander mountains we see are most likely on the Chilean side of the border, Chile has a knack for this. Chiles neighbours don’t like Chile generally speaking and the reason sited is often Chiles fortunate borders. Chile ‘stole’ Bolivia’s ocean making it a landlocked country, ‘stole’ land from Peru and grabbed the better deal out of southern Patagonia from Argentina. To the casual observer there seems to be a bit of sour grapes toward the country that has it’s house in order and punches quite successfully above its weight economically and socially. On the other hand Chileans will admit they have a fair degree of Pasado, or bravado about their success; so basically Queensland when they win something. I get the angst. We’re not too sure of where the battle lines should be drawn but we do love Chile and in the relative disorder of much of South America it seems pretty obvious how a nation like Chile might have become firm, even aggressive about its territory.

The walk turns out to be exactly that, a walk; a glorious soaking up of the surrounds, far from the lung busting grind that we usually take on. As far as a first dip into the travel habits of the elderly go this could do a lot worse, it’s a lovely day and we’re happy to shelve greater challenges until we get to El Chalten, the home of the Fitzroy range. For now we turn up to a plushly grassed campsite adjacent to a racing river sliding smoothly by. With barely a sole in sight we relax on the soft ground in the shade of an alpine beech and slip away the afternoon just like the river beside us. Sleep takes us for about half an hour but who really cares, there’s no time here, no obligation, no messages; nothing to interrupt a little slice of pure serenity.

We wake up a little surprised that we actually fell asleep to find that we’re not the only ones in the campsite. Just about five metres away we’re having our space invaded quite rudely; by two big birds of prey. I whisper to Charlie to get the camera quickly, I know what these birds are, they’re Southern Crested Cara Cara’s. I’m not an ornithologist by any means but the uncanny recurrence here is that we had a close encounter with these exact birds nine years ago on our last visit to Patagonia, Chile. Like an arrow shot from the past the name lurches from my mouth in stunned amazement. They’re solitary birds so to see two together like this just metres away is crazy, we’re speechless. They’re big, powerful, the pure definition of majesty and they’ve just naturally landed right beside us; this is precisely what we venture into the wild for. We sit on plush grass on a rocketing riverbank beneath grand mountains, everything postcard photographers crave, just about all to ourselves and these beasts just decide to join us after a nap. You get the idea, chalk up another moment that we just want to grab a hold of an make last forever.

Alas the moment escapes us borne on the wings of a fantastic animal, the Cara Cara’s leave just a little bit of magic as they soar away taking the moment with them. We started the days walk in the hornets nest of blue rinse tourism and we end up in an intrepid adventurers nirvana. The disparity between physical push and outcome here is a weird one, high season so rarely grants moments like this particularly without pushing the boundaries. Maybe being at the end of the world is adventure enough, a luxury granted to those that come. Grander mountains await, harder treks need treading and more evasive moments will come and go but now we’re in Ushuaia and the end of the world permits only space in thought, those other moments can wait. Right now permits only right now, we’re in some blesses cool weather both reading high-brow literature that is only beaten by the even higher-brow setting. so much for just a little walk.