Metaphorically bathed in chocolate we venture out of Bariloche, not without samples of delicious 80% and 90% cocoa bars, a necessity for any hike we have decided. Our conflict within Bariloche is unavoidable, it’s a crazy place so full of fanciful chocolate that one expects to see characters from Willy Wonka’s factory casually strolling the streets: Umpalumpas operating coffee machines, Veruca Salt directing traffic. Bariloche clings to the side of the mountain that rears up from the glittering lake shore, a setting to inspire romantic flights and indeed on a short trip nine years ago this is what it engendered in us. Now having settled into a less ebullient headspace the novelty passes over us a little, we’re left with the bad food and just another town on the trail to some degree. The fanciful romance of before has left with the Umpalumpas; someone left Veruca in charge and the shine has been dulled.

Today though we shake off our recent lethargy to plunge into the mountains to Frey refugio near Cerro Catedral, the true source of wonder for us nine years ago; at least mountains don’t change. This ritual of checking out of a hostel, leaving some baggage behind is fast becoming an instinctive act for us even telling the new hostel staff how it works, new life skills similarly earned and only usable on the travelling trail. The bus takes us past the lake positively shimmering in the morning sun, lingering uncertain feelings of Bariloche dissolve sweeping turn by sweeping turn. Funnily we pass several playa’s (beaches) which are little more than a few metres of rocky lake edge; I think we refine the term a little more in Australia. 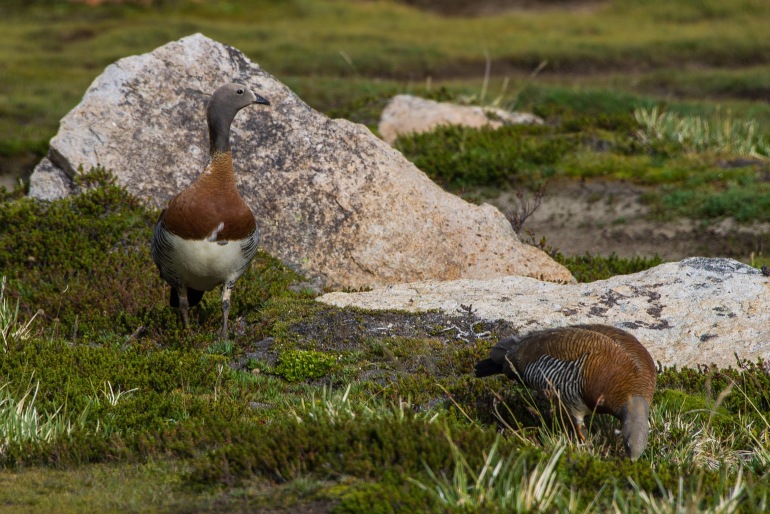 The beautiful drive does deliver a window into the operations of our brains; simple natural environments continue to amaze. Does a grand mountain, a glittering lake, a powerful glacier retain its wonder due to some historic link to an essential instinct or some similarly unfathomable urge from our past? Being a Printer by profession something similar plays out for me routinely, the receptive gamut of colours in the human eye; confused? don’t worry, allow me to explain. In short the human eye is more perceptive in noticing changes between shades of colours that are more varied in nature and not so good at seeing variations in less varied colours. Not surprisingly we are best equipped to note changes in tones of green to account for all manner of plants for food, very important for those of us that came before food labelling laws. Funnily enough we’re poor at noting differences in shades of blue, maybe because common sources of naturally occurring blue are the sky and the ocean with differing colours quite irrelevant to survival.

It’s with this in mind that we constantly venture into the natural world, it never ceases to amaze and inspire while rarely changing. The contrast is obvious, our voracious need devours new innovation and requires varied stimulation on a never ending conveyor belt into the abyss of our consumption. But mountains and lakes don’t change, don’t reinvent themselves like a pop star or need a new menu item every month lest we get bored. It’s not surprising then that a sense of calm washes over us as we begin the walk, it’s not particularly amazing in the early parts but we are notably less disconnected from what our base needs require.

Before I delve into in unrecognisably extreme idealist our trail bends between two mountains and heads up, steeper step by step. On this climb familiar sections of trail surge back to us, we remember this, that is until we reach the top. We know, or think we know that as we creep above the tree line into exposed openness a little before the refugio, but no clearing emerges, have we miscalculated? It seems not. To our amazement the tree line has changed, and changed in a massive way, it’s far higher. Without being professionals in any relevant field we’ll shelve our beliefs on climate change for now, what we can say though is that Catedral is quite a different place, it seems mountains do change after all.

It still has all the splendour of the romantic notions we’ve clutched to our chests for so many years, the small stone hut still clings to the shore of a meltwater lake, the mountains are still dramatic and we’re still thrilled we came. But the proliferation of the short hardy alpine trees is a real shock, they’re everywhere. Bedded at the runoff of the lake the refugio looks out onto an amphitheatre of jagged peaks; I remember describing them as broken teeth in a row surging for the sky and that is exactly what I see before me now, our memories maybe not so dim after all these years. Nine years and two months ago this cathedral was barren, duotone in it’s white and stone grace. The trees that rash their way up the sides of the hill are about 150m higher than they were able to grow before, just as breathtaking but quite a shock. 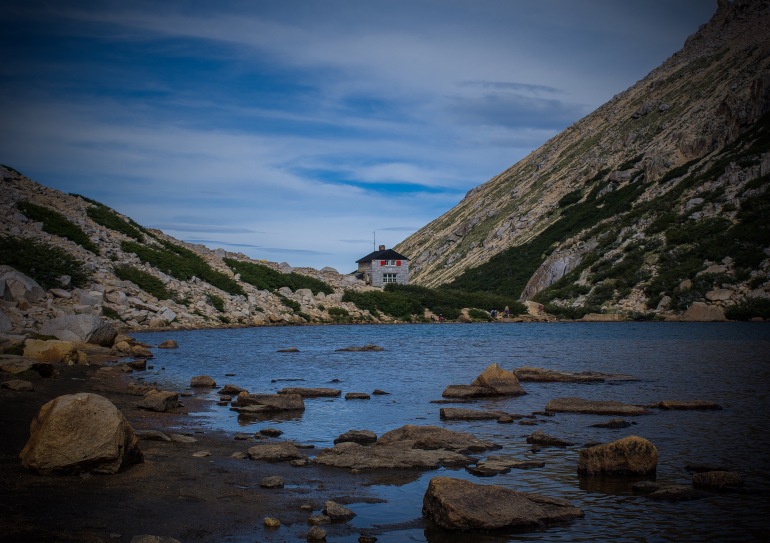 Our memories promise a frozen lake surrounded by brilliant white mountains, our winter wonderland. Our eyes deliver to us a desert wonderland, the gushing river now the barest trickle, no more snow here to melt. Although it’s later in the summer the higher reach of the tree line fortifies our memories from a fanciful notion into a bankable reality.

Travelling to all the places we’ve seen we have thought quite a few times that we’re happy to be visiting now in the rapidly changing societies we’ve seen; Ecuador and Cuba spring to mind. Never for a minute did we think that the same concept might apply to the natural world in a space that our lifetimes could appreciate. Frey refugio is the first truly natural place that we have now been to a second time and this variation paints a very different picture to our mindset. Yes it might not have rained in the Atacama for 400 years and volcanoes may have erupted many centuries ago but maybe it’s all changing in much shorter timelines than this.

In the cresting of a small rise and the blinking of an eye a great big assumption is blinked away like a frozen lake now melted, maybe we don’t race along as a society while the world stays relatively still. We’ve urged other travellers to see Havana in Cuba now before it changes but it seems we should bring a little of that into our own perspectives. There’s never a better time to see a world that a primitive part of our brains needs so much because tomorrow it might not be quite the same, a moving picture for us all.