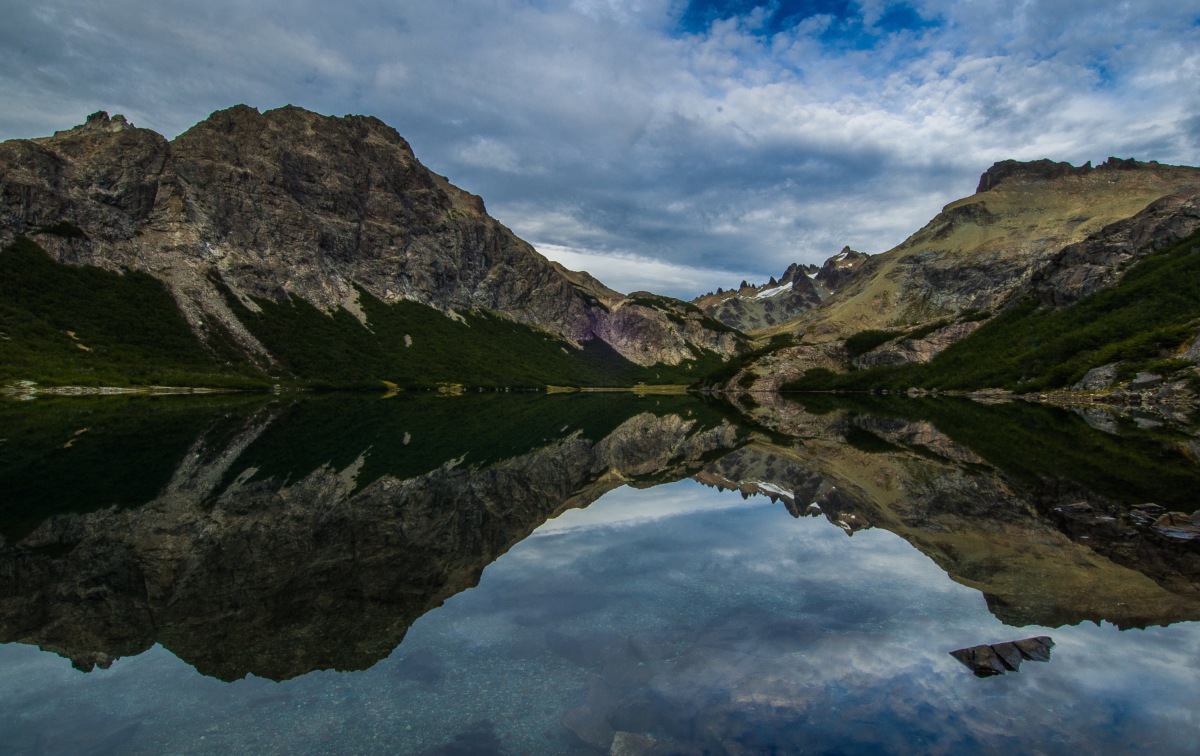 What a crazy thought, waking up in this place to go and walk to another ridiculously pristine lake hung high in these grand mountains, silly. Strangely enough that’s fast becoming a very standard past time, this area of mountainous wilderness we have plunged so far into just seems to run these things out like a Japanese auto production line. This time it’s Laguna De Los Témpanos and like a broken record it’s stunningly pristine, the water barely perceivable but for the shivering ripple of a surface disturbed from glassy mirror in rashes that sweep ever toward us. Backed by a severe wall of dusty green stone this relatively small pond sits cupped in the smallest of recesses stuck in the upper reaches of this landscape. We’re getting used to this by now and it’s still awesome.

This is but a short side trek for the morning though, we are back to Bariloche today and the hike out is somewhere close enough to 20km so it’s time to get going. A quick stop off at the refugio for one last look at another reason to discard believing in heaven, we’ve already found it. The water surface is smooth in the tranquil morning in contrast to the abrasive mountains that surround it. Yesterday we sat atop mountains gazing out across rows and rows of peaks each more imposing and inhospitable than the previous; who could have imagined that this could be here? Fittingly this oasis tucked deep in the midst of such a foreboding world is available only to those who make this trip, easy access would surely diminish the appeal of this place. But we did venture and we discovered, there’s more than just a passing thought to staying here, the world seems so far away and in this place that’s just where it feels like it should be.

Our walk out begins, not difficult plunging trails into valleys and up again this time, just a bloody long way. Steeply dropping switchbacks take us by a canyon waterfall running off from the lake that feels like ours, a final goodbye with the inviting oasis behind us and daunting trek in front. Why exactly are we leaving? Sadly flights of fancy remain so, devoid of form that might surely diminish the romance of a place that will no doubt forever retain a sense of magic for us.

And on and on, this walk is pleasant but it’s hard to overlook that we’re not going to anywhere special, we’re just leaving. Much of the trek takes us by the stream that carves this valley granting us numerous magical views that sadly barely raise the pulse, but none the less it makes for a far less horrid trek than it otherwise might be. Four hours later we reach the park exit and we’re snapped back to reality by dusty eroded paths, car tracks and heaven forbid, gates. This is the part that gets really wretched. Close enough to 15km now and we’re onto a hot dusty dirt road, our undervalued stream would be really nice about now. Previously impenetrable stoicism erodes in an instant as car after car passes our failed hitch-hiking attempts. It’s hot, we’re tired and we just want it to be over, what a rude plunge back into reality.

We do eventually reach the road and jump in a bus even without a card to pay with, no cash on these buses but there’s no chance in hell we’re tacking on another 11km back to town. We’re on the bus looking beaten and still not sure how we’re going to pay for this when an old lady passes us her travel card, gold. I rush to the driver and punch out two tickets as Charlie gives her far more cash than we used on the card, who cares right now. We’re nearly there, 39km in three days mostly on steep mountain slopes and all of a sudden we don’t have an inspiring wonderland to keep us up, we’re on a shitty dusty commuter bus and the veil is off, we’re stuffed. Getting off the bus is a short glimpse into our elderly lives, everything hurts; the few blocks to the hostel feel no easier than anything we’ve just done, it’s pain.

We groan and grumble through showers and into bed for a siesta without sleep, for now moving is just a bit difficult. With slowly relaxing bodies we drift off to something like escape, we’re momentarily back in the mountains so far from the world in our secret little paradise. We’ve all looked at grand photography of endless mountains so inhospitable, foreboding and aggressive only to wonder what is out there? Appearances can be deceiving and accurate at the same time. Foreboding yes, inhospitable no, the stark contrast of serene comfort with severe aggression could never be so clear. Take another look at one of those photos, go get one now. Stare at it long and hard and picture the most beautiful scene your mind can conjure out of it; you’re probably half way there.