There’s deep blue below us, the silken waters of the Indian Ocean roll and lap at the side of the boat. Salt mixes with a stronger than usual tint of fresh kelp to perfume the air we breathe. My mind wanders and wonders about a bottled version of this smell, surely this is the gentle fragrance of limitless freedom we all pursue, or is it just having this freedom of limitless time to consider such frivolity that we pursue. Does one need the other? Sitting top-deck this small boat sways and lists like a bored teenager, listlessly. Each tilt introduces us to the green ocean below before dragging us back skyward on a teasing swell. Land is in sight but too far away to consider, our world cut horizontally in two places, us above the unbroken surface and a place forbidding us below, we have our place.

But we dare, we tempt to break that surface that so clearly defines where we belong, pacifying mental meandering quashed by a desire to abandon the comfortability we’ve just been wrapped in. There’s a familiar hiss of escaping air quickly retreating to the world it belongs above the surface, abandoning us for where we should also be. This is not our world at all, we don’t belong here but we guess that’s why we want to be here so much. Physically free we can float and fly but visually we’re trapped. There’s nothing here, just blue; blue forever, blue all around in this new world, the fresh smell of salt and kelp are now replaced by neoprene and rubber. The blue is relentless but we know beyond the veil of our vision there is another world kept from us.

Blue is not only blue it seems, It’s dark grey and white as well. There’s a shape too big to be gliding so elegantly, this is no trick of the light from above; It is so close and it came from nothing before disappearing impossibly soon. Our linear world is now a disorienting sphere of too many directions from which that shadow can emerge again, and disappear at will. We truly don’t belong here. Another flash, a formed shadow torments our racing hearts to sink to a threat unrealised yet again. We really don’t belong here, we can’t smell the kelp anymore and the air we need continues to abandon us for the world above.

Our tormentor hides beyond this veil of blue that he can see through, we’re in his world and it’s never been so plain. From nowhere or somewhere within this world of too many directions for eyes used to seeing so few, a predator sums up his prey; we’re not the predator. Shark is apparently the most frightening word in the english language, sparking emotional responses like none other. How wrong that could be; far more terrifying is placing ‘Great’ and ‘White’ before that powerful trigger. And now circling, just a metre or so in front of us he forms from nothing to look into our eyes, baring teeth in a knowing look of careless dominance. How much we don’t belong is so comically displayed by how much he does.

White shark means white knuckles at the bar in front of us, a contraption from our world keeps us from him as surely as the blue foil hides him from us. It’s a dance, a pantomime this is; how feeble these constructs seem in the face of eons of learned responses. Over three metres long, too big to put our arms around through the middle and shaped like a bullet, apex predator seems such a feeble term looking into the eyes of such power and intent. Or maybe it just means a lot more when we’re not the Apex predators we usually are, so elegantly the roles switch in the piercing of the waters surface. How powerful that word is, shark. Not only the physical beast, the elegant magic show of illusion it plays so deftly creates the terror of a monster that can appear and disappear at will, from any direction. This illusion is possibly more the terror than the teeth or that iconic fin shape.

What a buzz, we’re taking in the salt and kelp smell again, above deck looking down on the shadows gliding below. We can see so much more from up here, our vision removing some of the magic show and with it some of the terror; we know below that it’s so different. From here we’re both in our worlds and both apex predators again if for such differing reasons. The slick surface of the water is slowly giving way to a churning boil all too quickly on the growing wind. It’s time to turn back from our flirtation with the beast below the water and return to shore on nerves of slowly ebbing adrenalin. 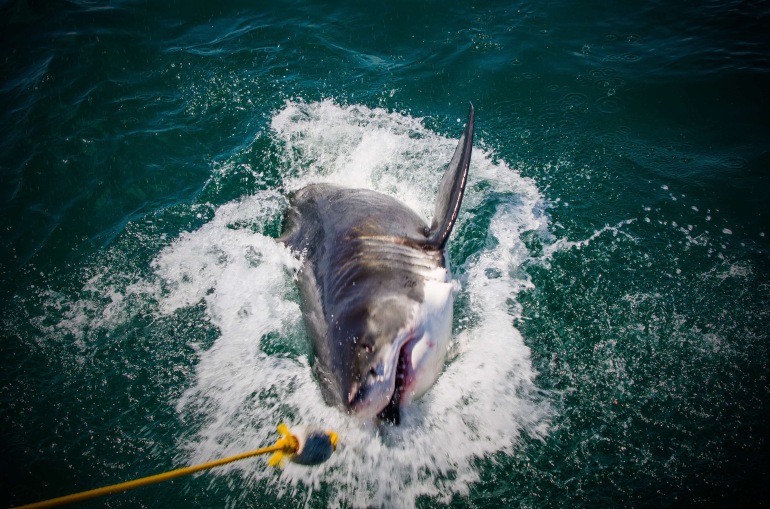 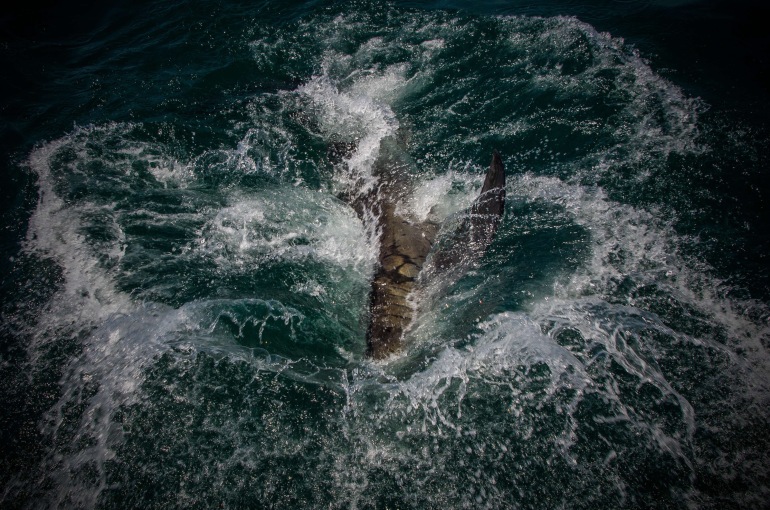 The journey back to Stellenbosch takes us through the picturesque mountains again, from wild terror to epic mountain graces in the blink of an eye. This place is not wild in the way that defines the word but it’s wild none the less. There’s gentrification on a scale barely fathomable on the doorstep of the untamed, ideas that so rarely rub shoulders. Like mushrooms sprouting there are spaces of blossoming comfort extracted in the cracks between the bricks of this wildest of paths. The mountain slopes are too steep and the oceans too wild to be truly tamed but we are afforded the space to grow in certain places. In these little bubbles exist the townships of humanity that nature affords us. Among the fences we place around each other there’s one greater that we are all contained within; together.