Four years of Christmas like anticipation has banked up, the boots are laced  up, packs are packed and I don’t care anymore that I woke up this morning with signs that I shared a bed with a rat last night. The first footfalls take place from the wobbly timber guesthouse and onto the rough stone road to a place dragged from a dream. Well we will be soon, the excitement rages unabated but the visual scene resists our hopes, the road that we thought stopped at Buhlbuhle continues further nowadays so it’s a construction road rather than a hiking path that we now walk. Perturbed yet undeterred we stride on a little quicker than we should, there’s an inspiring world ahead, we just know it, we just need to get through the wasteland that is a Chinese construction company’s playground.

Annapurna so far is a gift that continues to stay just out of reach, at every point we permit ourselves a hint of joy the promise slips just beyond reach, always perceivable but so far untouchable. Metaphorically we close our eyes and march forward, we’re in a fantastic valley but for now we don’t notice much of it, our world is concrete, bulldozed roads and gaudy signage sliced by the telltale arc of power lines overhead. A procession of construction promises to signal the end of development where nature regains its place at the top of the heap, for now though it’s smothered and scarred.

At the sight of a hydro-electricity dam we veer right off the path, the biggest piece of construction to date spells a reprieve as we venture into an eternity of terraced mountainsides. So rapidly does a natural world reclaim its domain that we soon forget about the construction, so far ahead are the big mountains and high passes but here already a charm and nostalgia overruns the valley. Agriculture abounds, every spare space is terraced into fluid organic shapes with whole mountainsides bursting with produce. As construction dwindles so does the rubbish, the wild world losing the battle below fights back so vehemently when given the chance.

At a small stop for water we have a minute to take in the scene, a scooped out depression in the steep hillside forms a natural amphitheatre too steep for any gallery crowd. There’s a terraced farm leading up to our path and carrying on up the hill as if in one motion, each terrace ends in a crowning lip that sits a matter of centimetres above the bed of soil. Weeds grow out of either side of this natural retaining wall with a padded smooth walking path along the highest point free of the weeds that hold the soil intact.  A root vegetable I haven’t seen makes up the majority of the hillside along with wheat, corn, cabbage, barley and cauliflower, this village of no more than five houses is surrounded by a rich bounty of food. We often think of terms like organic, pesticide free, non-GM, sustainable and all other buzz words but here it’s just called food. A warm sun beats down to cut the chill snap in the air, agriculture is booming and no one walks faster than they have to. I take a seat on the smooth edge of the terrace to hold tight to the narrow but so romantic view of life this simple before a need to move on takes it so unceremoniously from me.

Village after village clings to the ever steepening cliffs as the valley narrows to a gorge. winding through rough stone walled paths we weave not so much past villages but through them until Ghermu, our lunch spot. Over momo’s (local dumplings) and curry we have a chat with the guy who owns the restaurant which is really just his house. We ask about the road and disconsolately he replies so simply ‘It’s very bad, we like a simple life’. There’s a tight debate in our minds: developing this valley seems a travesty but on the  other hand it’s not our place to deny others luxuries we take for granted, it’s their valley after all. Hearing this lament that was mirrored by last nights host though deflates the  sense of balance in our minds to leave an unchallenged negativity to this development. To our shock he tells us that the road now goes all the way to Manang, the day six destination of our hike. We’re shocked and dumbfounded as a little piece of our dream shatters on the floor like a dropped glass at a party.

Farewelling our lunch host we plunge further on; prophetically not long after Ghermu the path crosses the river on a swinging footbridge, olive-grey water churns in a milky froth below as we tiptoe across. We’re now on the road. In the dusty rattle of a jeep bundling up the road the cloud we’d floated on through the villages precipitates and disappears into the sandy road that seems so out of place here. From a concerning start we were delivered to a kind of nirvana and wrenched so vulgarly back again, the gift of Annapurna has been teasing for so long and the closer we get the more it feels like it might never be ours. 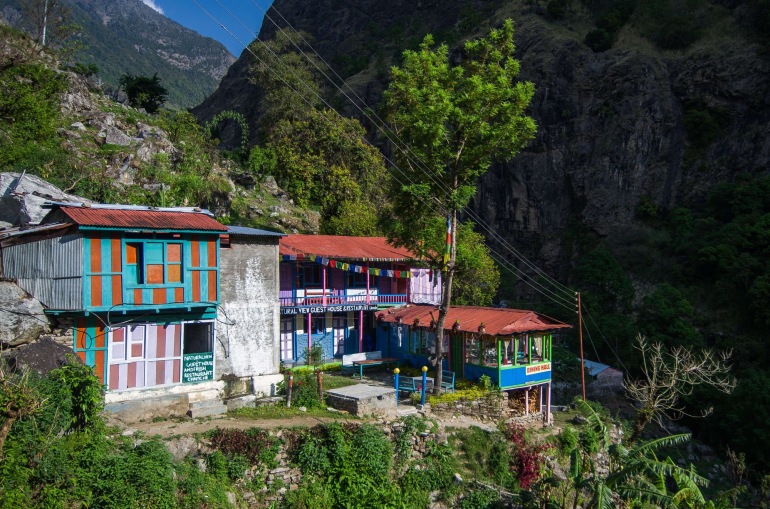 The next two hours walk to Jagat is more of a walk into despair. To the whining hum of a power station we kick at the stones on this abomination of a road while the vistas are scarred by pipelines, concrete retaining walls and sub stations. There’s a scene to inspire awe here somewhere but all we can feel at the moment lies in desperation and sadness, we’re devastated. We tell ourselves that higher up it will get better, later in the track it will be less developed; and it probably will but now that’s cold comfort so hard to hold. We know that the great Annapurna range is still there but the worlds greatest trek that was around 20 days has had it’s head and tail cut off and that’s the best scenario we can hope for.

Saddened beyond explanation we arrive in Jagat for the night, amazingly enough our guesthouse has WIFI, for the first time on this trip I don’t want WIFI. There will be wilderness up ahead the likes of which we have come for but for now we’re depressed and dismayed. Four years of looking on a map to Annapurna may just become the greatest disappointment of this year. But a spark still flickers, this is only day one and wild places are not so easily cowed, we know this but that fight just seems so far away. Four years of hope refines to an afternoon to change perception, an adjustment too quick for such a shock and a shock too big for the timeframe needed to accept it. We’ve waited so long to open the gift that is Annapurna and now we just see that oldest of practical jokes, just more wrapping paper and a scratchie that has already been scratched to reveal no winnings. Hopes lie in the shreds of wrapping paper we’ve already discarded, tomorrow promises another gift to unwrap but without the hopes that belong to the activity.