Light comes early in this part of the world, like caterpillars we peel back the layers of sleeping bags to emerge into a new day. We’re perched at the top level of our guest house and before the sun even illuminates the peaks of Annapurna-2 and 3 we can see the monstrous shapes forming a foreboding wall that blots our windows. Only when we get near to the window and crouch down can we see the beginnings of a blue sky forming above a horizon that seems in the wrong place. After teasing us for days but revealing nothing the Annapurna range bares all so unreservedly, Basically the mountainous version of restrained but ultimately lewd catholic sexuality. Annapurna has played coy so far but he’s a tawdry boy after all.

Sunrise from Gyaru, looking at the Eastern end of Annapurna-II, Gyaru, Nepal

But a view from a window just will not do, it’s time to climb down from our top room of this big house that boasts rough craftsmanship more like a childhood tree house. Dusty faded timber gives away to a central space which two storeys of rooms are arranged around, a design aiming for a grand courtyard and in a very quaint way nearly pulling it off. A stone floor barely discernible from the timber under years of painted dust boasts a kettle stove and formally arrayed benches not breaking stride with the monotone palate of the space. It’s a page out of an ancient Chinese novel, the neat balconies on the first floor still echo from a century past where families would lean over to listen to the tales of vagabonds, warriors and travelling traders. In that time gone by this place would carry a grandeur nearly out of place in these high reaches, but it’s aims lie in another era along with the lifestyle lived by these hardiest of people.

Spat out into Ghyaru town a world of roughly laid stone lifts from the ground with the same dusty grey making it visually vague whether the ground eroded away to reveal the houses or the houses were built on the ground. Walls cave in here and there but a sense of dilapidation is closely evaded and in it’s place the town bellows from centuries past. Prayer flags provide a source of motion and colour in this otherwise camouflaged town, the stupa that lays at the cliff edge, all white washed and brilliant red is the only building worthy of attentive care in a place of abandoned pretence. Men wrestle and scream with two cows pulling a wooden plough through sloping ground just recently unfrozen scraping out a living in a place that seems too harsh to allow it. We’re hurled back centuries to a time when humanity fought and struggled to survive; our track takes us away to our comfortable world of windproof fibres and goose down warmth but for a time we feel like we’re in the world of Genghis Khan battling the windswept plains of Mongolia. 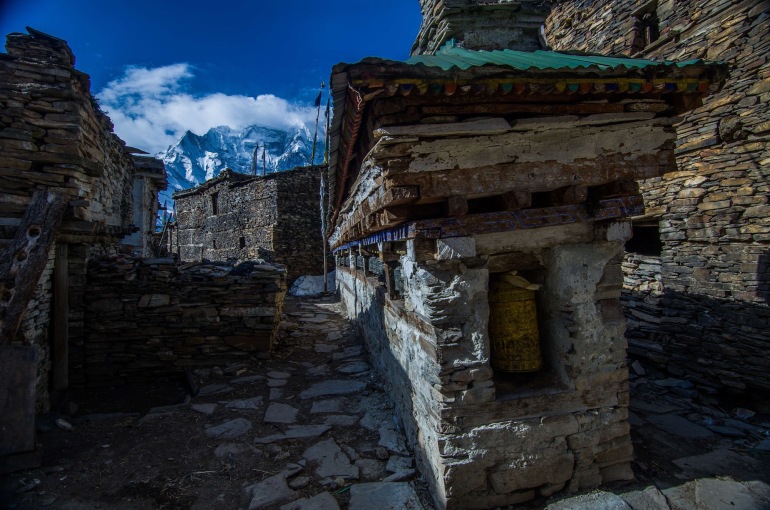 As captivating as the stone maze of Gyaru is the mountains cannot remain ignored. Skirting the high road on the mountain side we have an elevated view of the Annapurna range on a bright clear day, yes all the demure shyness was all for naught, he’s throwing it all out there. It’s such an uncomplicated sensation, this is precisely what we came for. Taking a short rest near a mani wall below the fluttering of prayer flags there’s too many peaks to look at all at once, we’re so uplifted we even chance a cinnamon roll from a small stall plonked in the middle of nowhere on this high trail. It feels so tempting to stay up here but the walking won’t walk itself, there’s a rest day tomorrow before the final push to Thorong La which we can’t keep ignoring for too much longer.

Down from the heights we arrive into Braga town for the night on an Annapurna high. Like Ghyaru, Braga sticks to the hillside with the now familiar stone buildings looking both abandoned and charming at the same time. Higher up the hill lies old Braga, now clambered over by a small army of workers in what appears a concerted bid to rebuild. Crowned by a large white Gompa dating back to the 14th century Braga town typifies what we might imagine of a relic from a time past.
We’re in Manang district which has the closest ties to Tibet of any Nepali province and the markers are all here to see. With influences from India in the south and Tibet in the north this progression through the trek has taken us far from the Indian slum feel of Kathmandu and into a more Buddhist passivity, even the appearance of the people has slowly changed as we’ve ascended. There’s still rubbish around but overall the towns are more or less tidy with barely a soul not put to work in some way; life here is a never ending treadmill of farming, building walls or cleaning something. From a platform of basic simplicity the people in these upper reaches are industrious if nothing else.

A very simple way of life persists but clearly not for lack of drive or motivation, everyone seems to work hard which makes me wonder why more effective technologies aren’t utilised? Surviving in this harsh land is not an easy task and not for a lazy or unmotivated people, the only conclusion to draw is that these hardy folk have an affinity with the simple life that they don’t want to let go of. It’s an often posed question of our modern life: does technology actually make us any happier? In our society children are medicated for depression from not coping with the pressures of a connected world; one technology created to solve the problem of another in an endless cycle of managing the potholes of our own development. Maybe the people here who live a life so foreign to a modern world aren’t irrationally stuck to the past, maybe they’re just onto something.