A green plastic table lays out before us, a timid fidgety man vacates a seat on our approach unbidden making way for people of some import that doesn’t feel like us; he doesn’t seem to know that. The will to defy the inaccuracy of false praise still sits at a higher elevation as we take our place on cracked cement pavement, matching green chairs that will never see an early retirement dutifully cradle yet another weary traveller. The smells of life outdoors doesn’t invade but gently knocks at the door, no discernible scent other than a concoction of life not wealthy enough to have indoor comfort opting for the outdoor alternative; life painted into that cracked cement pavement. Our own outdoor life blends seamlessly to become a street somewhere too close by, the swarm of chaotic traffic thrusts past to the warring sounds of horns and voices only slightly more subdued than usual.

Besi Sahar used to be the famed starting point for the greatest trek in the world, now it floats adrift days walk from the source of a former glory it will never reach to again. Adventure and purpose have been chased up the hill from this place by the hungry best of our world, left behind are its droppings to litter the cracked pavement; we feel so in-place here. A reptilian man stands on the same pavement but somehow above us awaiting our order also quite in-place under the canopy of power lines imitating the trees now long gone. Five days of exercised willpower have brought us here through aftershocks, night time false evacuations and a trip in the back of a jeep more akin to a violent amusement park ride without the cheerful padding. Left behind are the hopes and aspirations for adventure as we embrace a perverse joy at being thrust into this environment we wish to not know so well: our demise, our corruption so elegantly framed in the life of a plastic green table. 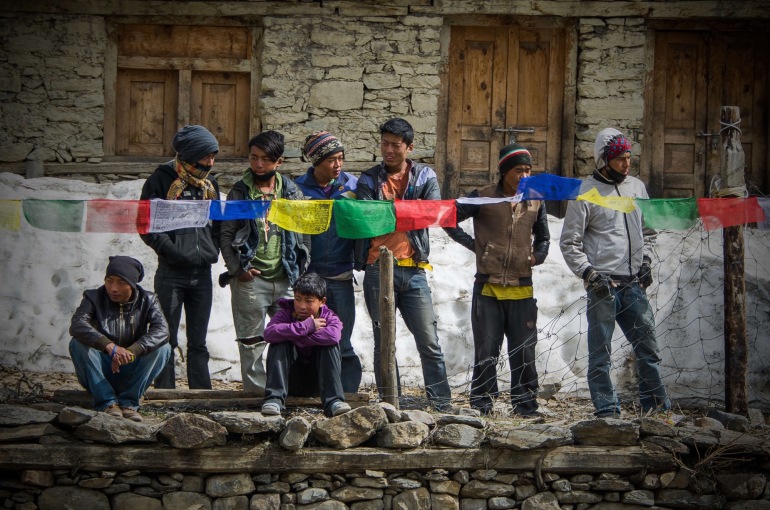 Holding onto glimmers of my own failed attempt to climb Cotopaxi in Ecuador, the passing of Thorung La was for days a vindication I marched toward. Not of my own failing this time my ego calls in desperate defence of itself, we remain cast down yet again with nothing of a sense of victory we sought and I needed. We climbed to the shoulders yet again, the head of the conquest in sight to be chopped off for a trophy. Poised to strike, the mountain shrugged and from its shoulders we fell; the hunted became the bully in a languid hunch aimed not even at us. Down we fell, a himalayan shrug casting these would be Jacks down the beanstalk leaving the bully to stand still mockingly above us, head so ignominiously attached. Cast down we’re still full of admiration for the handsome bully that has thrown us aside so casually: our own sense of aggressor worship as unstoppable as our tumble to this pavement.

Under the upper branches of fading signs and beside the steepling cliffs of decaying brickwork we stalk our domain for a way out, not feeling so in-place with stomachs full. Charlie is the enraged tiger in a circus of years passed, the feeble four legs of a timber stool thrust to his face now a procession of buses going everywhere we don’t want to go. Our bus is not due for another ten minutes but it’s not the time that enrages, it’s the loss that remains after the bully has had his way casting us to this mess from which we still look upward in awe. As the tiger rages in vain, this tiger rages a similar vein. A rattly mini bus pulls to the cracked cement and the timid fidgety man gently gestures to us before pointing to it; still a word doesn’t pass his lips, anchored still to his place where we displaced him.

And so the book of mixed emotion turns its final page. There were highs, the bully did for a time embrace us to show us all the glory and uplifted sense of standing that comes with being held close to him. But as bullies inevitably do he cast us down so irreverent to our distress and so we limp away still buoyed by those moments held in his favour and so forlorn for the times forced out of it. The walk, the jeep, the bus and now the taxi is the journey required to achieve an inadequate therapy; so fitting that the taxi loses a clutch to remain in second gear before failing entirely to coast in silence to an acquiescent death at the doorstep of our hotel.

It’s a dubious healing; warm blanket, smooth floors, hot water and a toilet trifecta: a seat, it flushes and we can put the paper into the toilet. Oddly this seems such a thrill. We’re in a cocoon of luxury preparing to be spun in thread and submit to the shelter of a world so far from what we chased; chase. There is no healing to do as such, nothing more than the reconciliation of a want to be near to he who has discarded us. The warm dreams of a comfortable bed will tonight be filled with the icy warmth of the mountain still with its head so fixed. This world of no cracked cement can be so irrational; even more so trapped by the allure of a handsome bully.