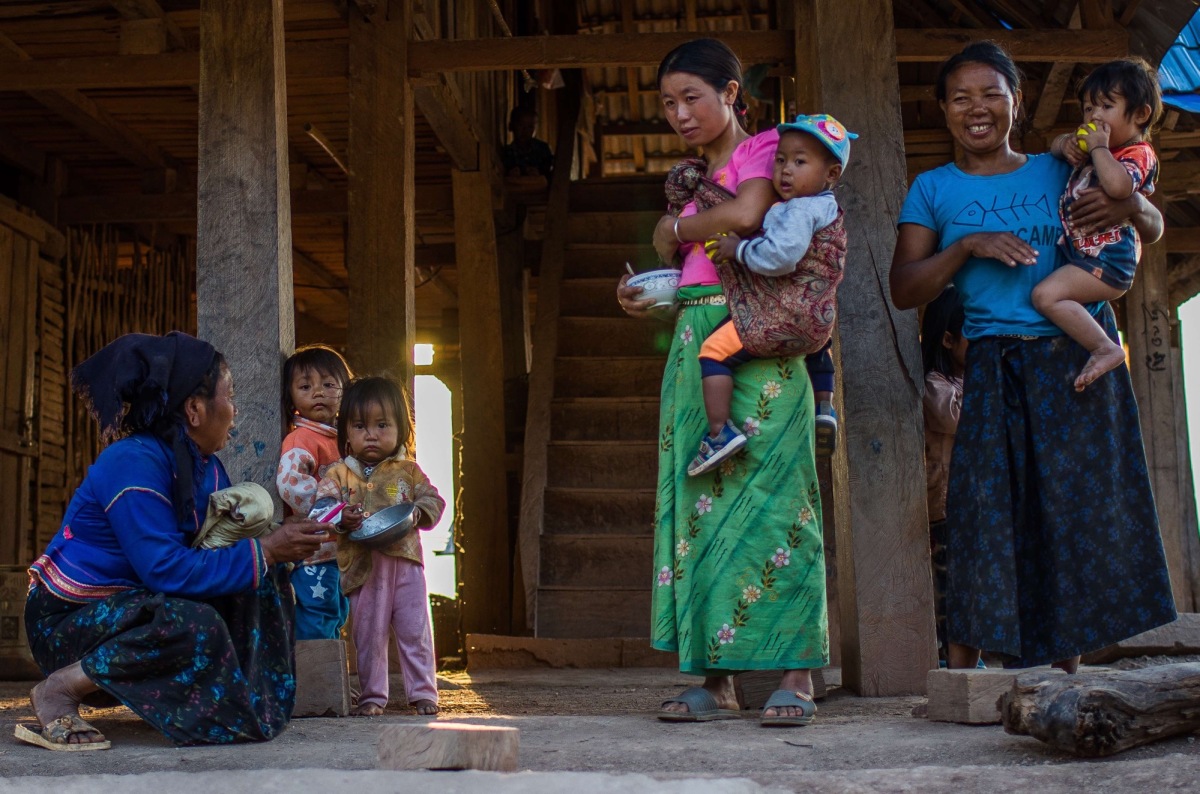 It’s morning time and in Zhanglang and the English translation here is more or less: market time. I’m on the back of the bike with Wendy and everyone else is crammed into the van with China-esque human rights considerations. Xiding township nearby is about ten minutes away and the G8 minus me pour out of the van like clowns in a circus and now embarks on the amble toward breakfast. So far we’ve been treated to sensational food and all of it largely in the form of two meals; massive varied share meals make up lunch and dinner while breakfast time can only be noodles. Food on hold though this is no casual vendor on a rug selling a few goodies, it’s the market version of a rave party: high intensity with an atmosphere that whacks you in the face as you step past the bouncer and through the curtains past the surly alternative cow in bag check. You can even buy glow sticks.

Rows and rows of fruit and vegetables form a colourful gallery either side of the entry as we commit to the market, this cramped informal passage into the throng doesn’t scream of an easy reverse, no going back now. But why would we want to, as Echo says: T.I.C: this is China. To compliment the freshness of the fruit and veg a deeper voyage into the market reveals fresh meat; literally. Huge slabs of all parts of every animal are laid out on large tables with the ever sanitary corrugated cardboard to soak up the juices and hold them at room temperature, delightful. It’s no wonder we’ve all taken turns at getting sick on this trip, safe to say that food hygiene messaging isn’t a big focus in rural China. Past a man using a whopper of a blowtorch on a disarmingly intact pigs head, sans body, and a woman carving huge ribs into sections with a double handed cleaver more like a broadsword it’s enough to turn one vegetarian; almost. Time for noodles, might go the pork this time.

Of course they’re delicious and along with the glutenous rice dumplings with vanilla paste we’re in heaven without the party drugs. Taking a look around between slurps of our noodles we’re enlivened by the buzz of a world set alight. High in the mountains we’re in a small town we’d unlikely ever be able to get to if it weren’t for Echo and Wendy, slurping noodles in a buzzing local market while shy ladies giggle good naturedly at our poor pronunciation in the middle of nowhere. As far as true experiences go it doesn’t get much better than this, this defines the concept in all its privilege. China is absolutely chock full of confirmations to every cliche you could think of from home and good, bad, enlightening or offensive they’re all rolled up in this market and staring at us all from our bowl of noodles. Slurp. 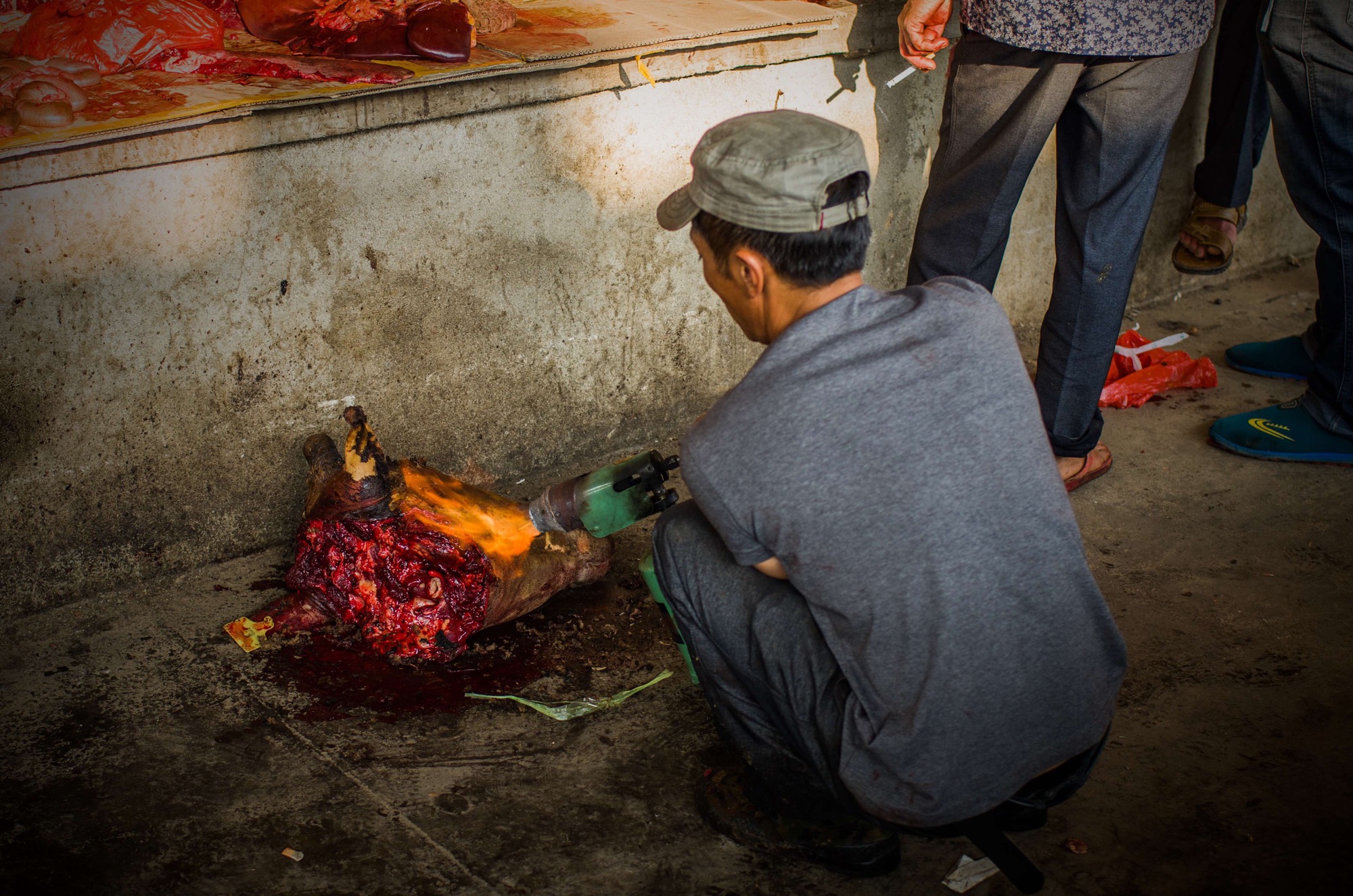 After guiltily packing a few slabs of toffee peanuts and sesame seeds into a bag we can’t overlook the cycling forever, those toffee calories aren’t going to burn themselves. Today though is on cobblestones so it’s safe to say that elegant cycling isn’t on the menu, we all opt to van it up the first mountain climb. Away from the flatlands it’s not agriculture overload anymore yet the beautiful scenery is taken in through small glimpses, focus will be required to bash through this road. After a short wander around a tea plantation it’s time to stop the denial, we’re onto the bikes and uneventfully we’re in Bada, plunging ever further from urban China and deeper into privileged opportunity.

What to say about Bada. Essentially not a lot, it’s the embodiment of functional township which now represents China to me. One main street runs down the centre with a marketplace that looks more like street stalls that haven’t been used for a year or two but no one has the heart to throw them out. Rustic timber houses clamber on top of each other up the slops all bearing the gleaming uniformity of newly installed solar hot water systems on blue corrugated iron roofs. It’s pretty bland but clean in comparison to most places we’ve been so far, I wonder how a place with no doubt less access to services than the lower towns can maintain a higher degree of order and cleanliness. But I guess we always kind of knew it wasn’t about capability, attitude has seemed all along to be the weak link it’s just now we feel comfortable calling it that.

A small town visit sees us holding court with the local village chief, Echo and Wendy are facilitating a potential donation from a philanthropic Thai couple to provide a buddha statue for a new temple. In a town of 70 families a cost of 1 million yuan is exorbitant to say the least, our visit is wrapped up in a good deed; very buddhist. The grannies also dole out a bunch of gifts to the local kids; pens and pads draw a crowd as we are treated to tea and fruit in the crowd of chickens and pigs. Not a single tourist has been seen from the first pushed pedal and in Bada we are as far away from civilisation as we’re going to get, the extent of our journey off the track, into the bush and then a little further. We signed onto this whole trip to see the world without the filter of a tourist bubble; for better or for worse this is the real deal. After all, T.I.C.