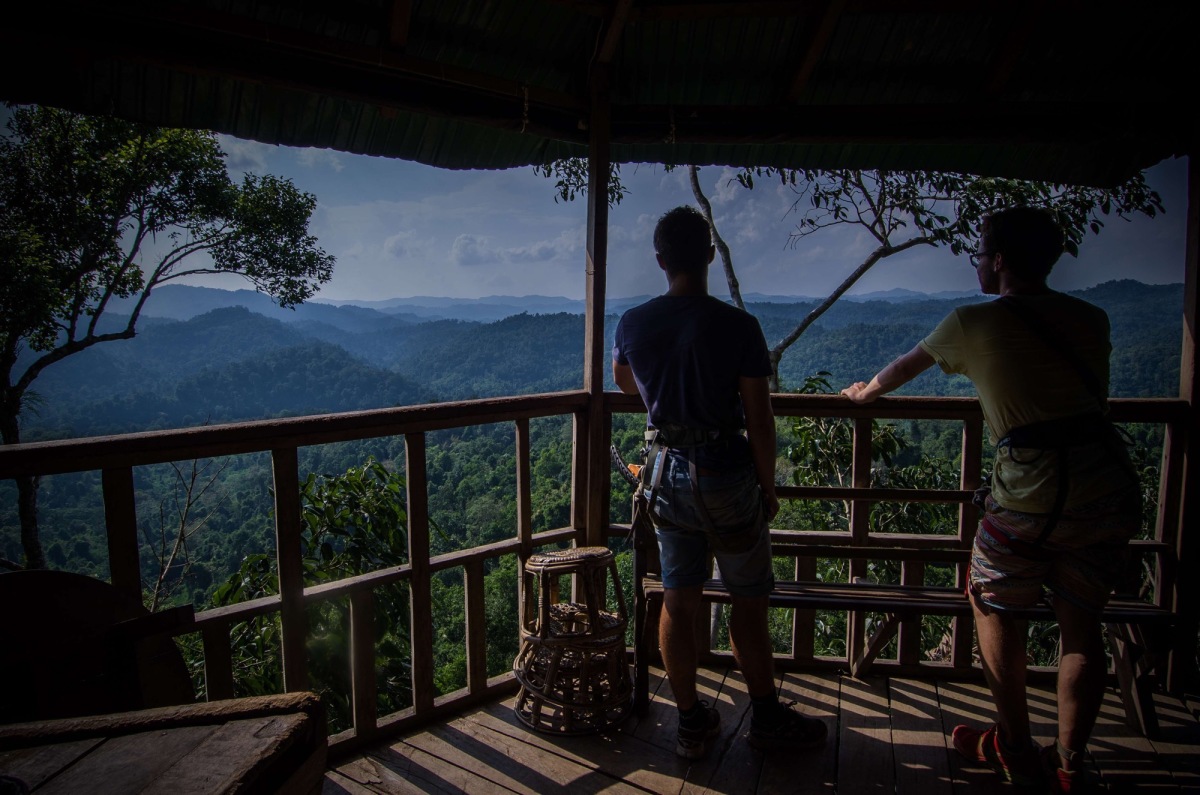 Three Swiss, two Aussies and a Brazillian walk into a jungle; sounds like the beginning of a bad joke with an even worse punchline but that’s exactly what’s happening today. My morning alarm came on the hushed whispers of Dennis and Charlie up early for a morning zip on cables strung around the jungle canopy, the best efforts at silence so immediately betrayed at the whining zing of the cable singing as one of them launches off the platform into hanging space. A moments pause, the encore song.

The slow ebb from slumber to a new day takes place in relative familiarity. A choir of birdlife, rising wind, animal chatter and running water forms the gentle chorus of life a step closer to nature. It’s familiar but not the same; bird songs and a whistling breeze are usually far above me, not confusingly around me in all directions. Mildly disorienting, this scene brings to mind the etherial journey of Edgar Allan Poe’s poem ‘The Raven’, rapping, rapping at my chamber door. In the famous poem the raven represents a persistent invasion to a mans world that he fights but cannot deny. The poetic similarity lies in that gentle relentlessness to which we all must face a world today that seems so discordant and foreign, overpowering a lifetime of senses now rendered so upturned. Life in the treetops is an abandonment of so much we spend a lifetime coming to know for sure, for a time to learn anew.

The slow release of a life we thought we knew for certain continues as the cables sing once more, breakfast comes flying past our house as dinner came last night. A community of people seem to move and live in the treetops reaching back into history and living a life linked to our genetic forebears; the gently rising and falling pitch of the cables song fast becomes a familiar piece of our sensory lives. In short order Charlie and Dennis follow and like a sixth sense we can feel rather than hear the movements of our friends through the singing of the cables. The treetops now so much closer to us are alive in more ways than we ever knew.

As predicted, today brings jungle and sweat in unfathomable volumes as the march takes us further and further into this inhospitable world, feet so firmly on the ground for a time. In just one day there becomes two lives for us: one familiar with our feet on the ground shrouded in dense shadows and sweat, the other so new lived in the treetops full of light and exuberant flight. It’s that latter life that we launch into again now so willingly for something so unfamiliar. Through a small channel sliced through the jungle growth a green tunnel ferries us to that second life bursting from our enclosed tunnel into open sky, the birds eye view. Where treehouse-6 yesterday was among the treetops, treehouse-5 today towers above, an impossibly tall matchstick of a tree presides over its domain at the head of a valley. In a royal court a king always sits above his subjects; in this case, tonight we are kings of the jungle.

We play Swiss card games in the treehouse so casually as if it was our lounge-room at home, this life up high no longer a raven rapping on our chamber door; we’ve welcomed in the raven and the new world that comes with it. An afternoon zip around the canopy similarly drags us closer to this new world we hungrily sink our teeth into, foreign seems less foreign as each cable sings its song into tree trunks that hum the tune like acoustics of a grand concert hall. The grandest concert hall. Again a shower with a view, again dinner delivery comes on the vibrato song of a cable we can feel before we can hear; yes we’ve invited the raven in and this mornings weird new world now so rapidly seems like it’s been part of us all along. Maybe those links to our genetic past aren’t that buried after all.

On the waning day we are so far from the world we know in so many respects and so much closer to the the world we are journeying towards. A storm threatens our existence for a time as the guides zip in to evacuate us to ground, this tallest of perches nearly 60m up so vulnerable to natures forces. But royalty never abdicates on a whim, the storm passes and we retain our thrones for another night at least. Yesterday we spent the day journeying away from safety and the world we know always with a mind to return at this adventures end; what a difference a day makes. We will return to that world tomorrow but instead of turning back we’ll push on through this new world eager to launch further and further into it. An exit back to our old lives lies ahead, not by the same door through which we entered.