180 says the scoreboard on the side of the road, the scoreboard that counts down rather than up, 180km until we reach Buon Ma Thuot and the coffee mecca of Vietnam. Greg is in fine fettle after his stern talking to just days ago and even the temperamental princess Rob is making good time to the foot of the mountains, despite the last days refusal to start electronically; kick starts are so common. Scenery plays out like a scripted artwork, rice paddies reflect the rearing mountains through green shoots of new rice, canvases painted on a grand scale. The scoreboard ticks along like any other except for the direction of the counting, a turnoff says the score is now 136 with the sun still low in the sky warming our backs.

A century seems a good score to celebrate, 100 on the board and we’re still going strong. There’s no coffee at this cafe so it’s a cool drink in its place, the stifling heat of the lower plains already melting into a scoreboard with favourable numbers on a day that defines a great road trip. Rob had been behaving so well. The refusal to start electronically now passes onto the kick start as the little drama queen won’t budge, sending me scouting the roadside for mechanics with Charlie resorting to the silent treatment. The placement of mechanics in Vietnam is uncanny, there’s one at every corner it seems as Charlie pushes the little tart a few hundred metres ahead to salvation. Salvation in theory at least, a smiling face gestures another five kilometres down the road in the typical Vietnamese way; if you don’t understand something, just laugh. There’s 99 on the scoreboard and things don’t look great.

Starting off with a tow rope we tentatively venture a kilometre or so up the road but we’re not sure about picking up speed downhill on bikes with just a metre or two between us; it’s time to bring a bit of Viet style into this mission. We’ve seen it done but haven’t tried it, instead of pulling the sulking cow, just give her a good push with one foot on the exhaust; what could possibly go wrong? We’re asking ourselves that a little too often lately. Gentlemen start your engines; in a staggered position like a racing grid we set off slowly with my foot shoving Rob by the ass, literally. In no time we pick up a bit of speed, this crazy idea actually works. Time to change gear, shit, I need my left foot for that. A bit of a kick in the bum sets the unhappy couple a tad ahead and a quick change sees me a little wobbly but back in the groove. If the word absurd needed a definition, I hereby submit us right now as a candidate. 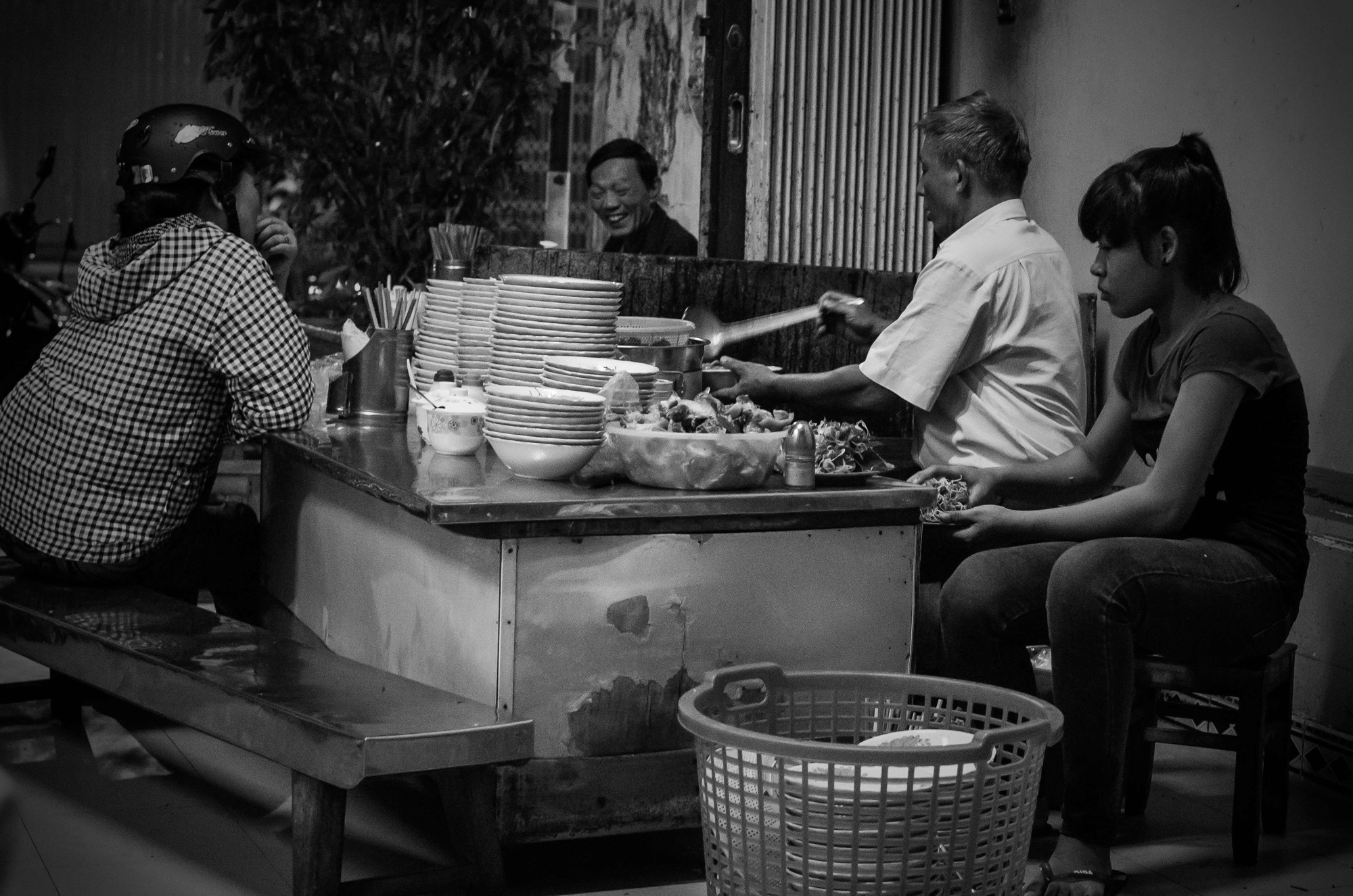 Making our dinner, on the road, Vietnam

The scoreboard reads 95 and we pull into a roadside garage not sure if it’s a mechanic despite the sign at the front, it’s far too clean. In a flash the engine cover is off and it’s disaster, Rob is not only sulking now, the toys are truly out of the cot with a large flap of crumpled metal twisting off the alternator. Oh dear. No worries goes the saying, out comes a hammer to beat some sense into Rob and with the bent metal bashed into place he shoves the alternator back on. Our smirks soon slip from our faces as Rob starts again first kick. Maybe he just needs more kicking.

With a whining Rob sulking all the while we’re ticking over the scoreboard again as each kilometre throws up more and more of the Vietnamese phenomenon of carrying the world on a scooter. Piles of logs two metres long and thick as legs, five metre long tubes of rolled roofing metal or just a henhouse of chickens along with your family, there’s nothing that Vietnamese people can’t get onto a scooter. And to think of all the times that I’ve borrowed a ute to carry something that could have just gone onto a scooter, shameful. Ticking off 37 more from the scoreboard the complaining is just too much and in the comfort of a larger town we decide the little shit needs some attention; or domestic violence. Is it bad if that’s a grey area?

A new alternator goes along with a little electronic widget and we’re off again, the scoreboard ticks down from 58 which is too far to push Rob by the exhaust pipe. Not willing to stop, Charlie urges me forward to try an get some baguettes that we can eat on the run so hi-ho Greg, away. Like a thoroughbred, the usually more power-over-pace brute clips into a charge on the thought of food; he’s becoming more like me by the day. Sadly no baguettes are on offer and feeling uneasy about leaving Charlie behind we stop off for the best thing on offer; as the scoreboard reads 37 it’s a couple of packets of chips while Greg and I wait for Charlie and Rob to round a corner. 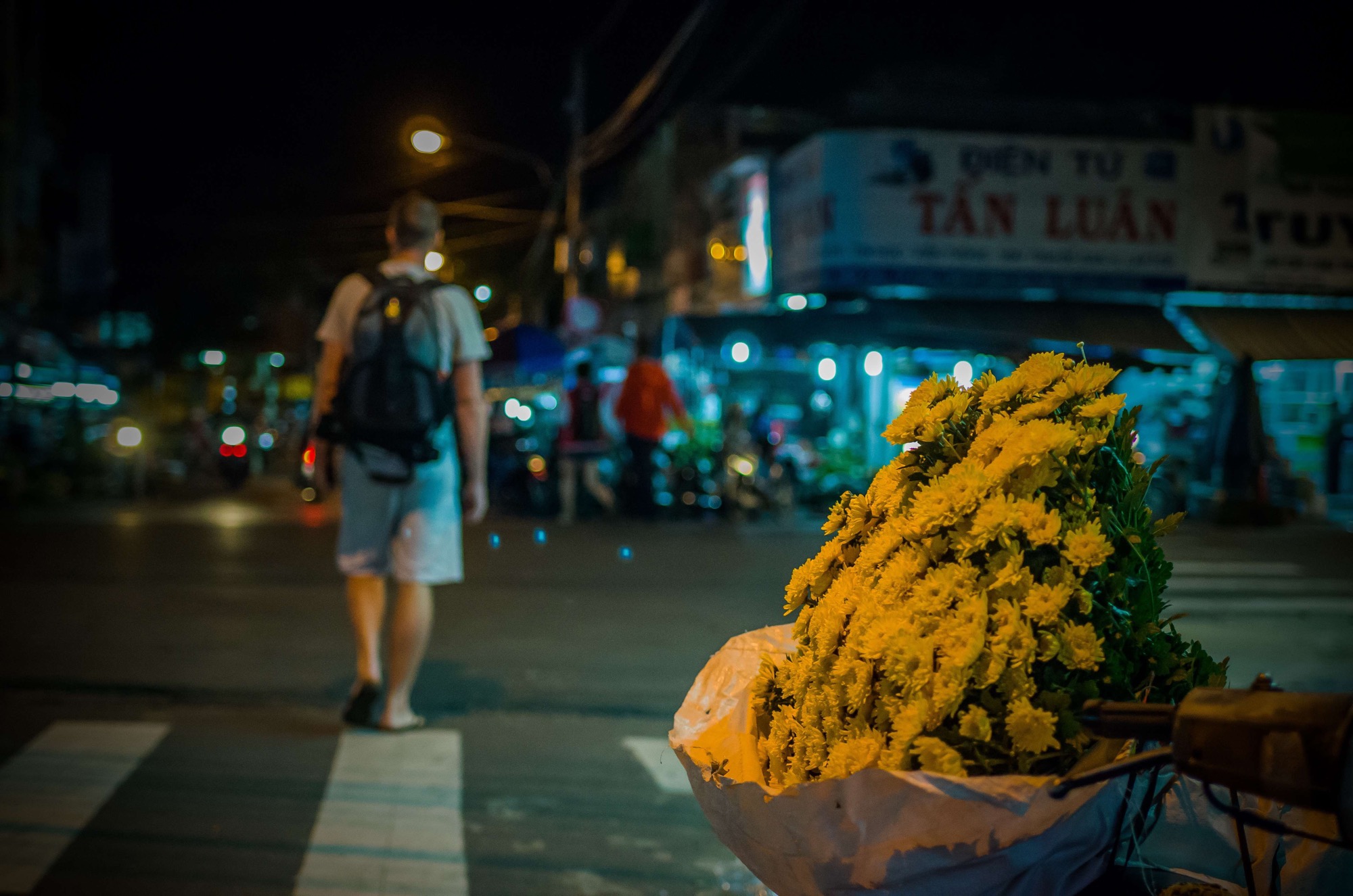 On our way to dinner, street scene, Vietnam

It’s a miracle, here they come and in mid ride I’m handing over some chips to Charlie as an alternative definition for the word absurd. I hang in behind and with the occasional corn twistie flying off into the air I can’t help feel that we look like a motorised Hansel and Gretel in desperate need of rescue on our way to our doom. As the scoreboard ticks over at 20 we’re run off the road again, it seems that oncoming traffic can excuse themselves for anything as long as they beep the horn, but we survive just another standard feature of Vietnamese roads. 20, 19, 18; I think if all else fails I can shove a foot on the exhaust pipe for 20km’s but each metre represents a victory as we’re all collectively cheering on Rob to make it just a little further even though the sounds are getting worse and worse; death is inevitable.

One is not the loneliest number than I’ve ever heard, it’s the best. The city border of Buon Ma Thuot is behind us now and like a spoilt brat at the gates of school on a first day Rob throws himself to the ground and holds his breath till he goes blue in the face. The scoreboard reads just one and it’s foot on the pipe yet again for the metaphorical kick in the ass that the pretty boy needs more than a celebrity bad girl. As Greg whispers to me “Charlie deserves so much better” the scoreboard ticks over to zero upon my reply; “I think they’re made for each other”. There is only one solution to these irreconcilable differences, coffee; and Rob is not invited.