The farewells have been made for Hoi An, this town of near immeasurable romance; for now it’s an early morning scamper from town like outlaws in an old western movie. A quick stop by the tailor for a final check up, five baguettes in the backpack and it’s out of town before the sheriff catches us. In truth there’s a rugby game at 2:30pm we’re racing towards but it sounds so much more romantic to be outlaws on bikes running from the law. In a way we are riding illegally so hitting the road again does carry with it a healthy slice of rebellious freedom.

The bikes are in fine fettle even if Greg is spluttering a little and Rob is winking at all the boys as usual with Charlie leaving the indicator on; the little tart. There’s 136km’s to cover today, a short distance by any real measure but it’s all about the Hai Van pass, a small section of mountain switchbacks famous as one of the most beautiful roads in the world. We skirt Da Nang city and before us rises the sharp peaks that plummet into the ocean so dramatically. From sea level we climb, the open expanse of bay that holds Da Nang, Vietnams third largest city, is rimmed by a white crescent beach cradling a big blue ocean like a cupped hand. Up and up we go, a sharp turn on a switchback holds us aloft as if on a pedestal to look out over our domain; mountains are our backdrop but all we have is space and a morning sun dancing a million flickers on that big blue ocean just for us.

A quick coffee at the top has us just short of halfway to Hue in great time for another baguette to go with one last look at this famous view. The spectacular oceanic ride up now so deftly turns from the ocean and into the weaving embrace of the mountains, the road snaking and scything its way elegantly flowing with the mountain rather than bypassing it. Pausing for a photo this is an odd sensation for us, appreciating a man made road scarring wondrous natural grandeur. So often we would think that this scene would be so perfect without the road but the subservient curves bending to the will of the mountains shape only accentuates the roughness of the terrain and places scale to it.

We coast down the winding road a little surprised that the Hai Van pass is so short, less than 20km’s in all but this sharp spike rising form the ocean is the reason for it’s drama, a pimple on the earth rising up so sharply where plains and beaches otherwise should be. And still we twist down, Rob winking all the way at every boy that passes, shamelessly onward to Hue. From famous Hoi An that lived up to its hype we’re enlivened and thrilled by the spectacular Hai Van pass that equally fails to disappoint, maybe disappointment just isn’t a Vietnamese thing. 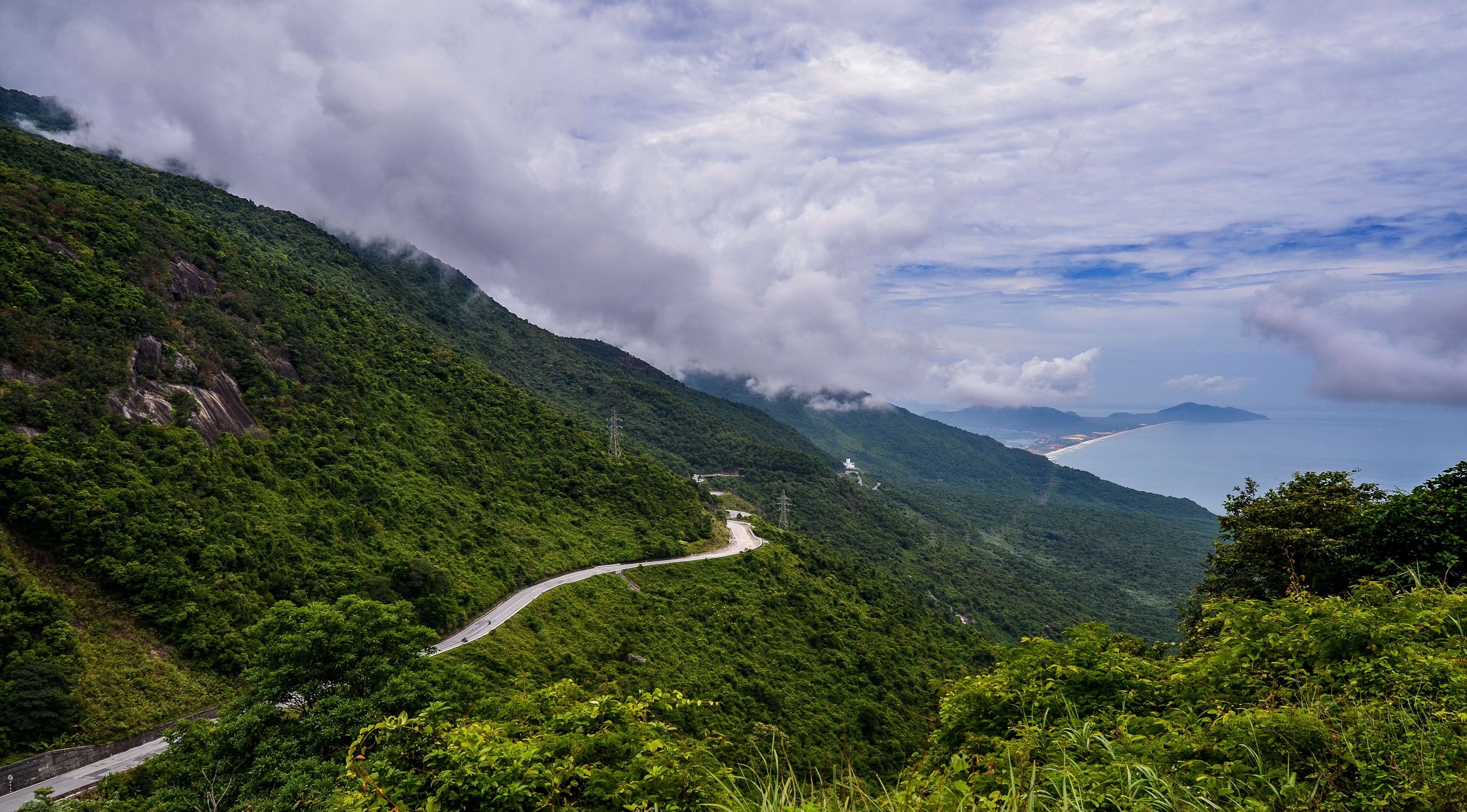 The ribbon of road descending from the Hai Van pass, Vietnam.

Greg charges with all his bullish brawn while Rob dashes so swiftly, still winking all the while as Charlie seems to enjoy indicating to the world that he’s turning, sometime in the future he’s going to make a turn. The kilometres tick down as we roar to Hue in great time, Greg is spluttering a little more as he heats up but we’re too close to stop. Well we attempt to push on but the big sook is having none of it as he essentially throws a tantrum and splutters to a sulking halt. After a bit of a cool down and some stern words he’s up and running again albeit not happy about the arrangement requiring high revs to keep going; he does need a firm hand does my soft brute. Just like his namesake he may look like he’s going to beat you up and steal your wallet but he’s more likely to give you flowers and then timidly apologise for maybe being too forward, sometimes he just needs to be told what to do.

The run to Hue is a Vietnamese road like any other, chaotic and haphazard at best. At home we drive defensively, we assume that everyone will actively attempt to kill you and so we ride with space and caution. In Vietnam we simply replace the assumed homicidal intent of other drivers with negligent disregard, evidenced by the bus that attempts to overtake and plant Charlie into the middle of its grill if it weren’t for Charlie’s awareness. Traffic is very chaotic but overall quite manageable: except for traffic pulling out from a gutter or side street, there’s no rationalising that part. Flogging a wailing Greg a guy pulls out from the kerb heading for the second lane away and not once was there even a glance towards the traffic, this is beyond common. I swerve into the gutter lane to go around him obeying the golden rule in Vietnam: move consistently so people can plan around you. All simple except that Mr vision impairment decides to falter, stop, start and then stop again. Thankfully I am aware but it’s not without a grand screech on the road, centimetres separating us and some bellowed words that I’m thankful he doesn’t understand. And onward to Hue.

Greg is basically crying in public and crawling on hands and knees protesting as petulantly as possible and all the while not daring to actually stop. While one of our boys is all in a mess the other is still winking at the world still, sashaying his way into town like a renowned burlesque dancer tempting his audience. Maybe I should just rip off the indicators. And so we’re in Hue, a town of great historical significance but for now it’s little more than a rugby game, there’s only so many romantic highs we need in one day. Riding through Vietnam sounded like a great idea at the start of the trip yet little did we quite realise just how impactful or dramatic every single day on the road would become. Be they cities, food, disasters, scenery, experiences and even roads, every reputation in this country seems to be the rarest kind; well earned and never overstated.