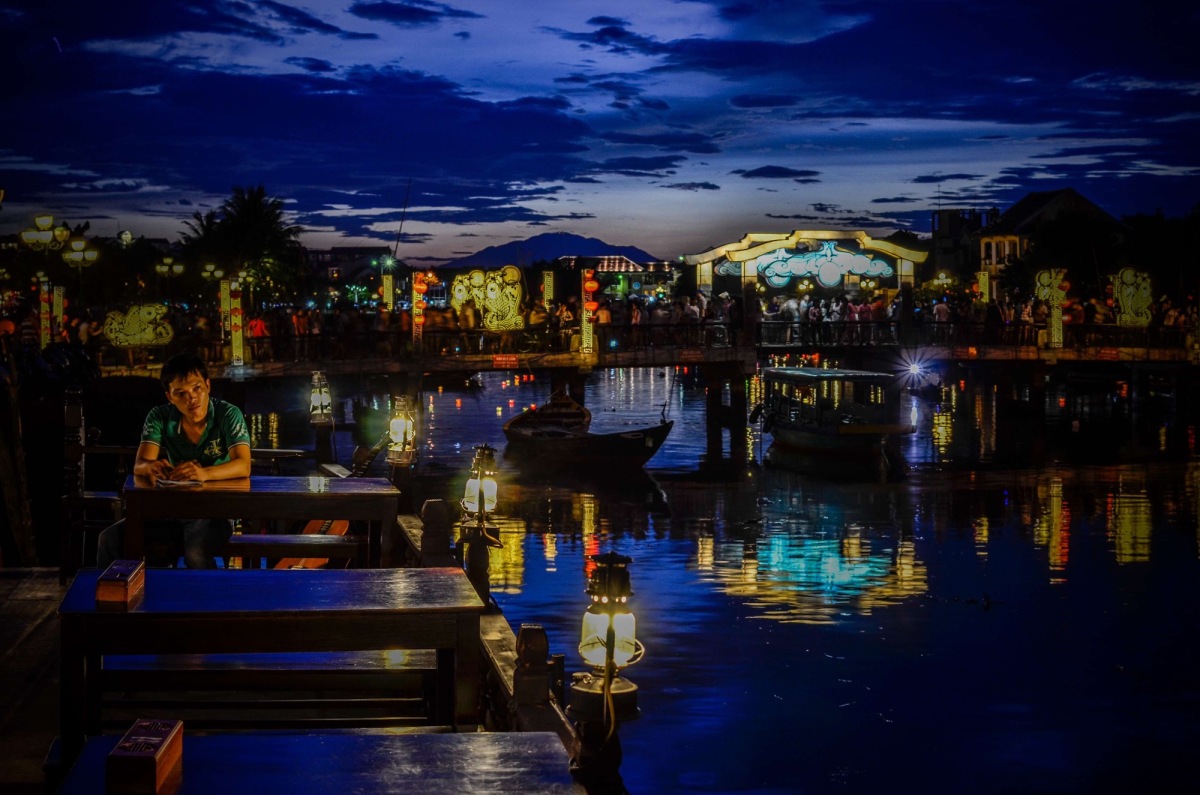 Six weeks riding motorbikes from Saigon to Hanoi was one of the best things we’ve done on our year, an adventure within the adventure that delivered memories for a lifetime.  The Ho Chi Minh trail in the mountains bordering Laos was incredible but the countryside was at its most amazing due to the people and their food.

These are just some of the characters we met on our trip.  There were many more of course including Tung in Hanoi who had quite an impact on us.

The mechanics in Vietnam were mostly fantastic, often so willing to help and generous with their time. We got to know a few better than others, this mechanic shop in Hué was a fun experience even after the third visit. Central Vietnam. 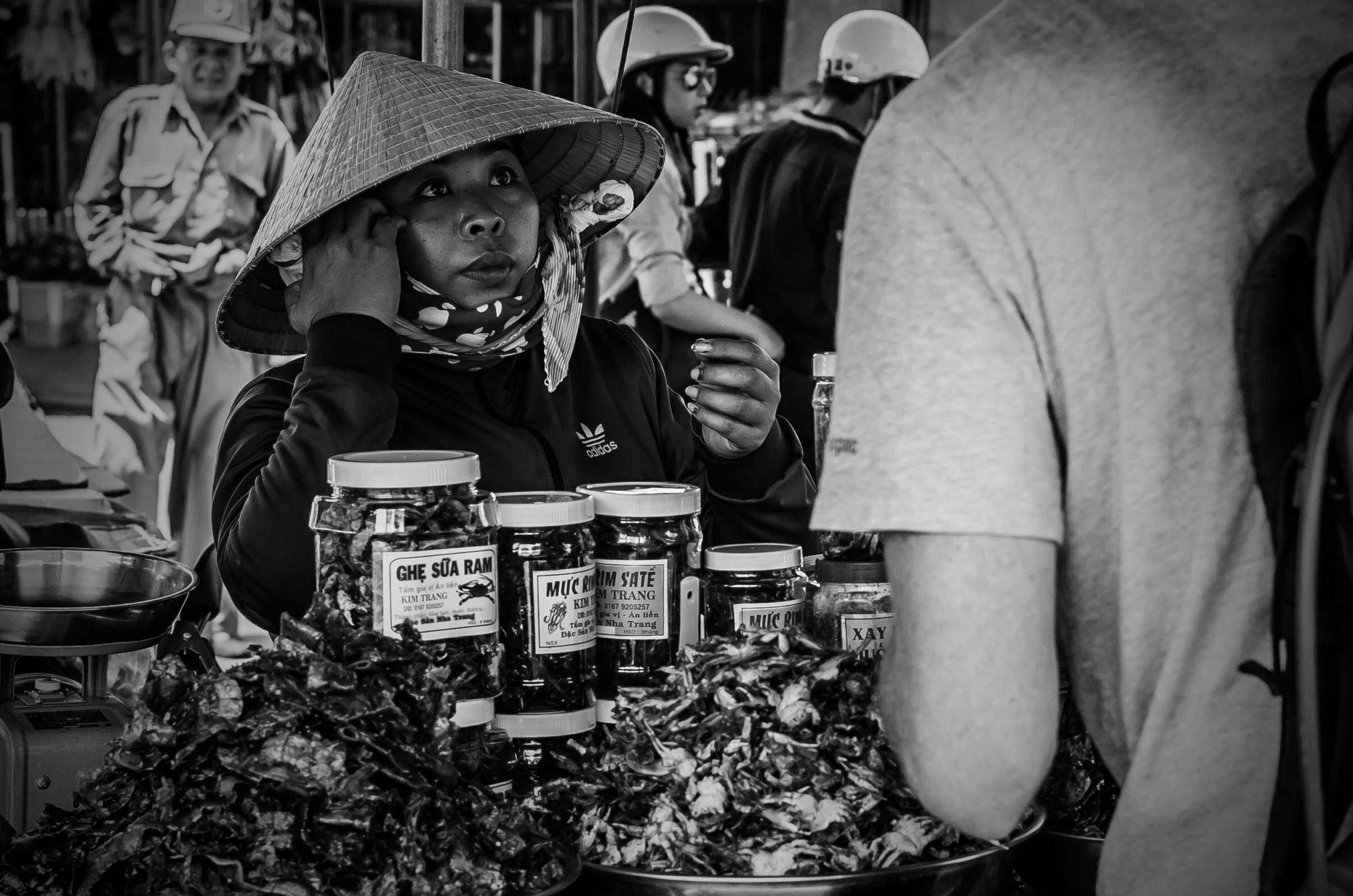 Without language buying food becomes a charade of gestures, mimes and expressions. Some faces say it all with just a look. Nha Trang, Vietnam.

Our boatman rowing with his feet, nothing too stressful. Tam Coc, Vietnam. 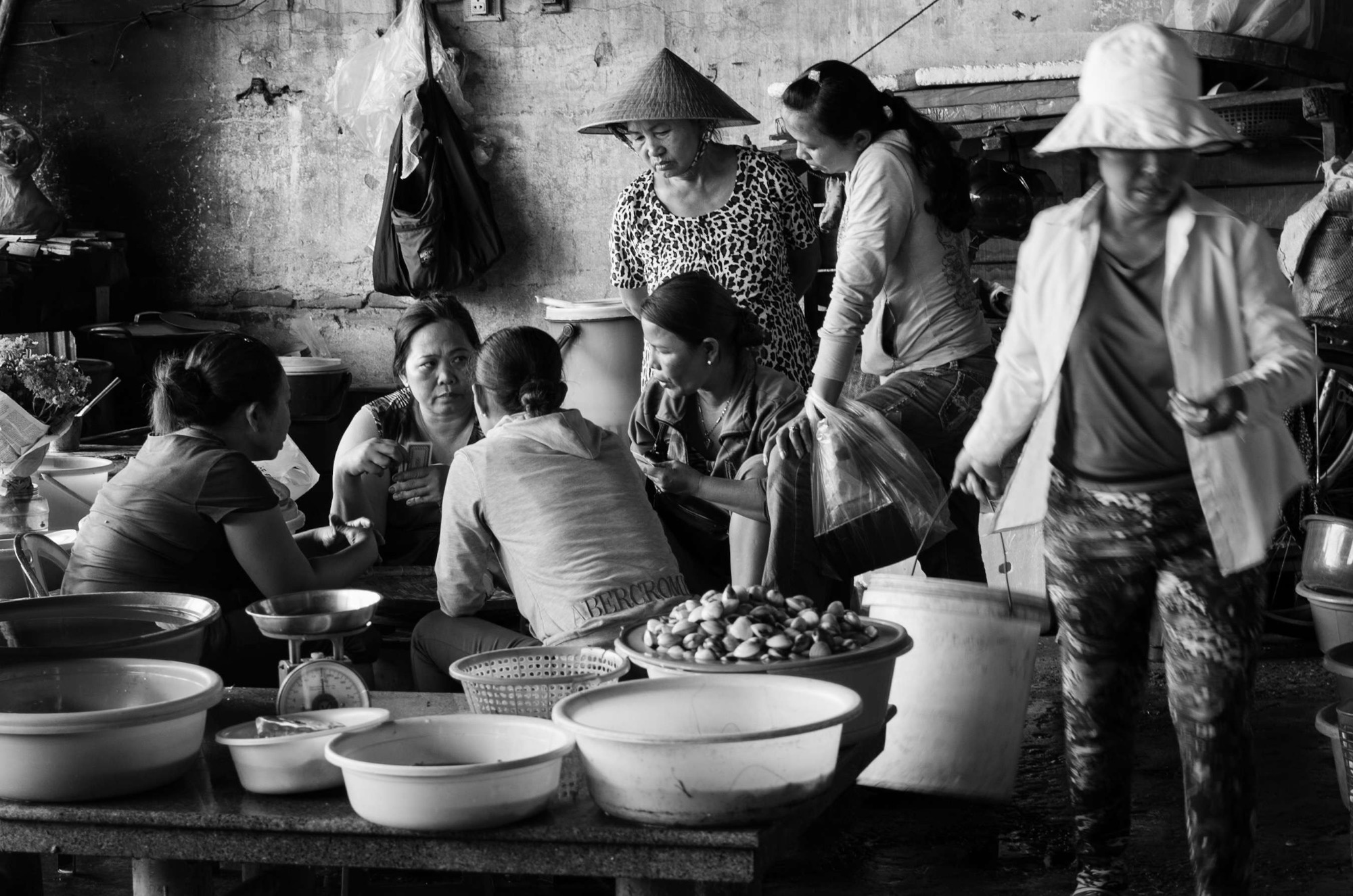 Seafood vendors, playing a serious game of cards while they relax following the morning rush. Hoi An market, Vietnam.

The street sellers have always been an integral part of Vietnamese society while the mobile phone and scooter is much more recent…it appears to us all three are deeply ingrained in this culture that lives on the strets, Hanoi, Vietnam

Behind the waterfall is obviously the best place to fish. These boys were having a great time and enjoyed being watched by a curious crowd. Near Buon Ma Thuot, southern Vietnam.

After seeing Paradise cave, we were returning to Phong Nha and this young boy was taking the buffalo back to their corral for the night. He asked us to slap a slower buffalo so he didnt have to jump off the back of one. Phong Nha, Vietnam.

Apart from the people the places we visited were not only beautiful but full of life, spirit and  of course wonderful food. So much history calls out from ancient times to more recent events in towns and cities that always have more of a story to tell than you see on first view.

The old town in Hoi An came alive every evening with people settimg up food stalls, beer stalls or trying to entice you to go for a boat ride. A lovley place to wind down with a beer. Old Town, Hoi An, Vietnam.

The tombs of the old emporers of Hué were grand and intimidating – so we jumped in line to intimdate other visitors. Khai Dinh tomb, near Hué, Vietnam.

It had been raining all week non-stop when we finally decided to go to Ba Vi national park. A mountain where a French fortification used to be, the fog was heavy as some guys carrying fruit in sacks drove past. Ba Vi National Park, Vietnam.

Ho Chi Minh is regarded as the modern father of Vietnam. Saigon was renamed and his body lies in state in Hanoi. However I feel this image represents modern Vietnam as uncle Ho over looks the modern skyscrapers where banks and many foreign capitalist companies now reside. Ho Chi Minh city, Vietnam.

Paradise cave in Phong Naha national park is so much larger and more breath-taking than this photo shows. 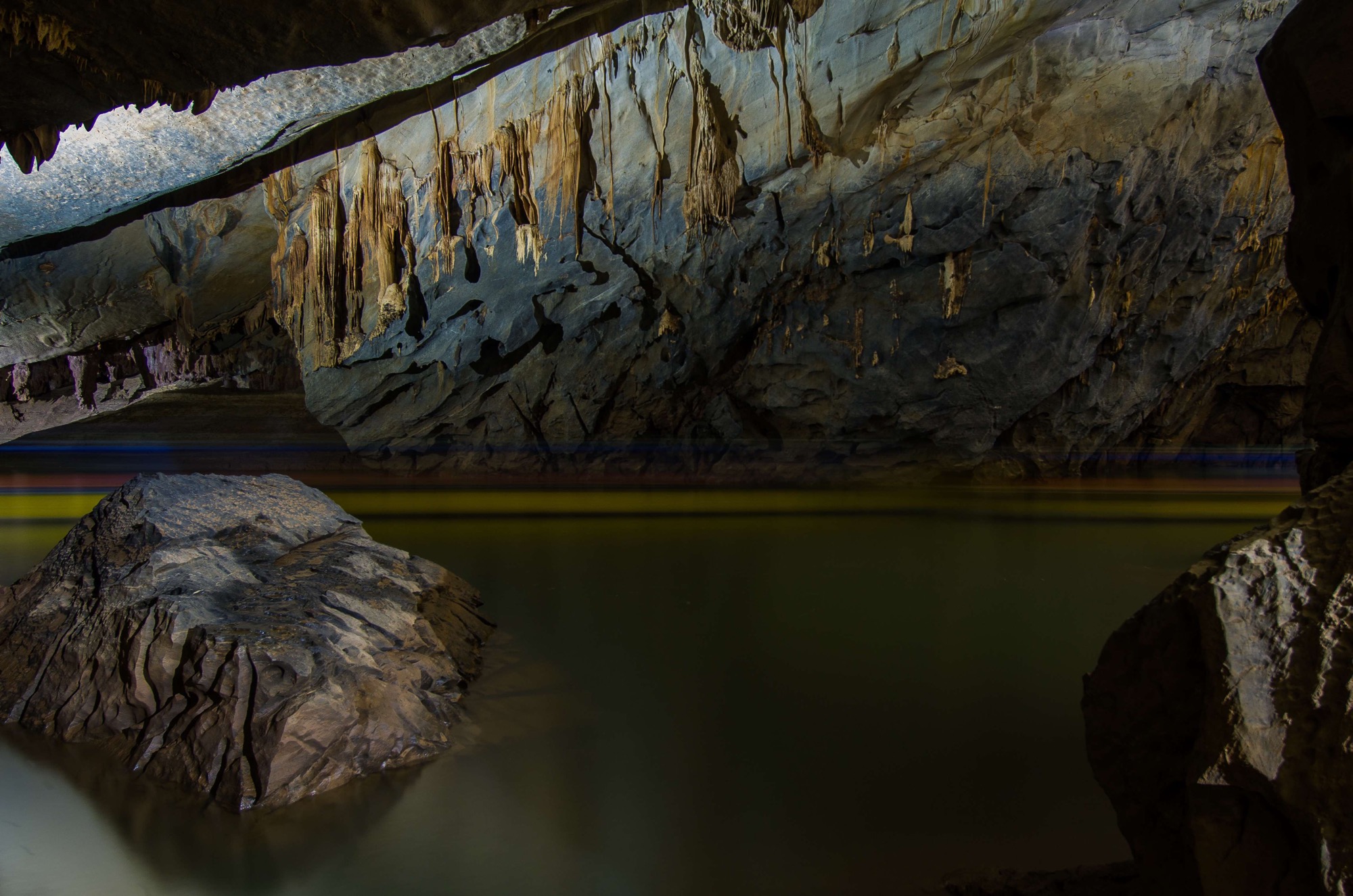 The slow boat into Phong Nha cave is a slip into stillness, silence and tranquility. I tried to capture this mood with a long exposure of a boat drifting by, Phong Nha, Vietnam

Low tide river banks choke with colourful fishing boats but life on the water continues even at rest, Near Mui Ne, southern Vietnam 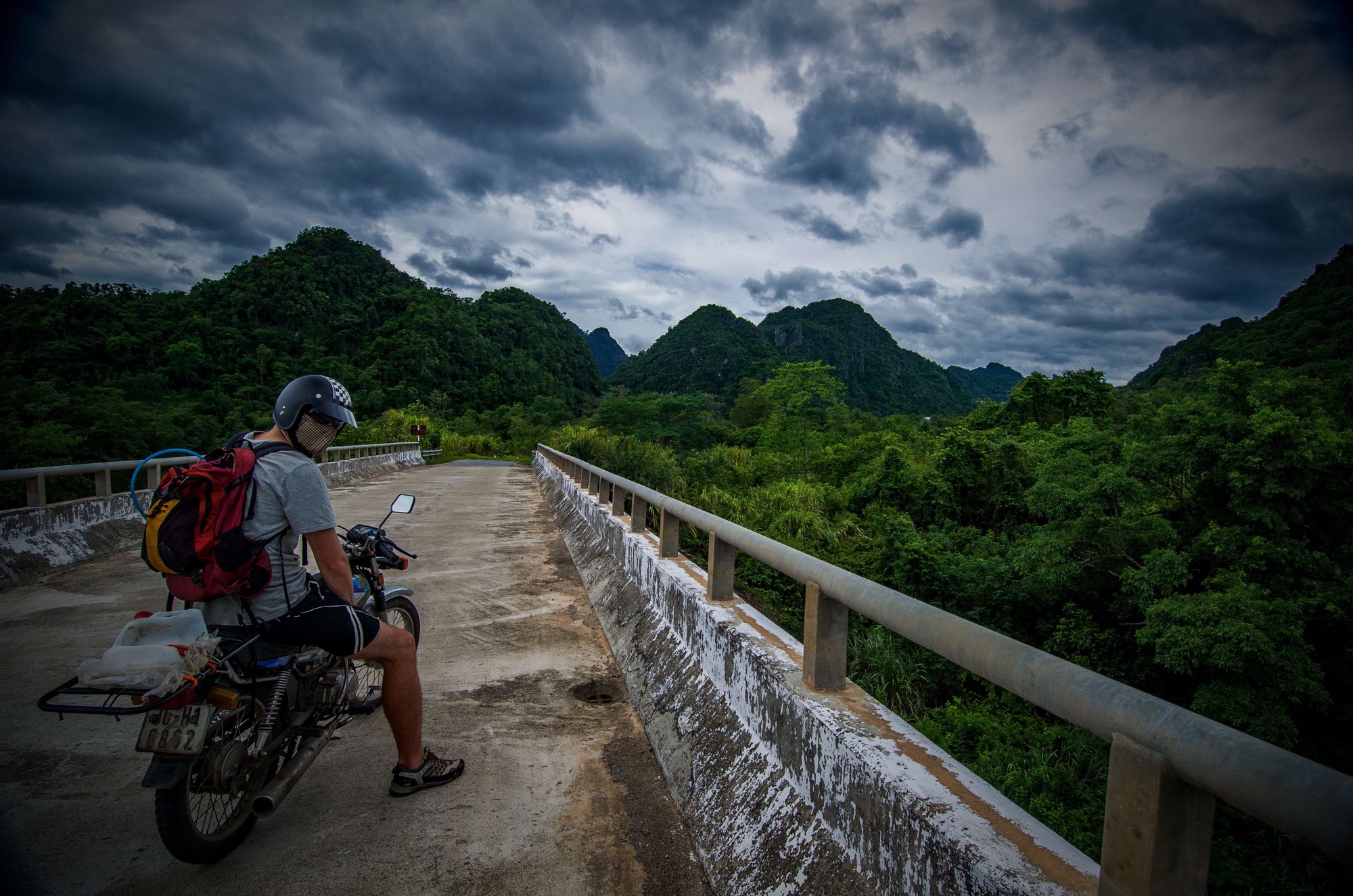 In dramatic scenery it often felt like we were channeling the frontier adventure of Mad Max, the classic Australian film, the road warrior takes on the Vietnam mountains, Near Khe Sanh, Vietnam

Hoi An old town, a UNESCO world heritage site lights up at night. The motion and life of the river contrasts so strikingly with the old town facades, Hoi An, Vietnam

Self portrait of a photographer staring at the mountains and the road trip that defines this country for us, Near Phong Nha, Vietnam

People and places make a country however in Vietnam the food and the Vietnamese’s love of food can’t be ignored or left out.  So the photo’s below represent the Vietnamese’s dance with food and how inextricably it is woven into the country. 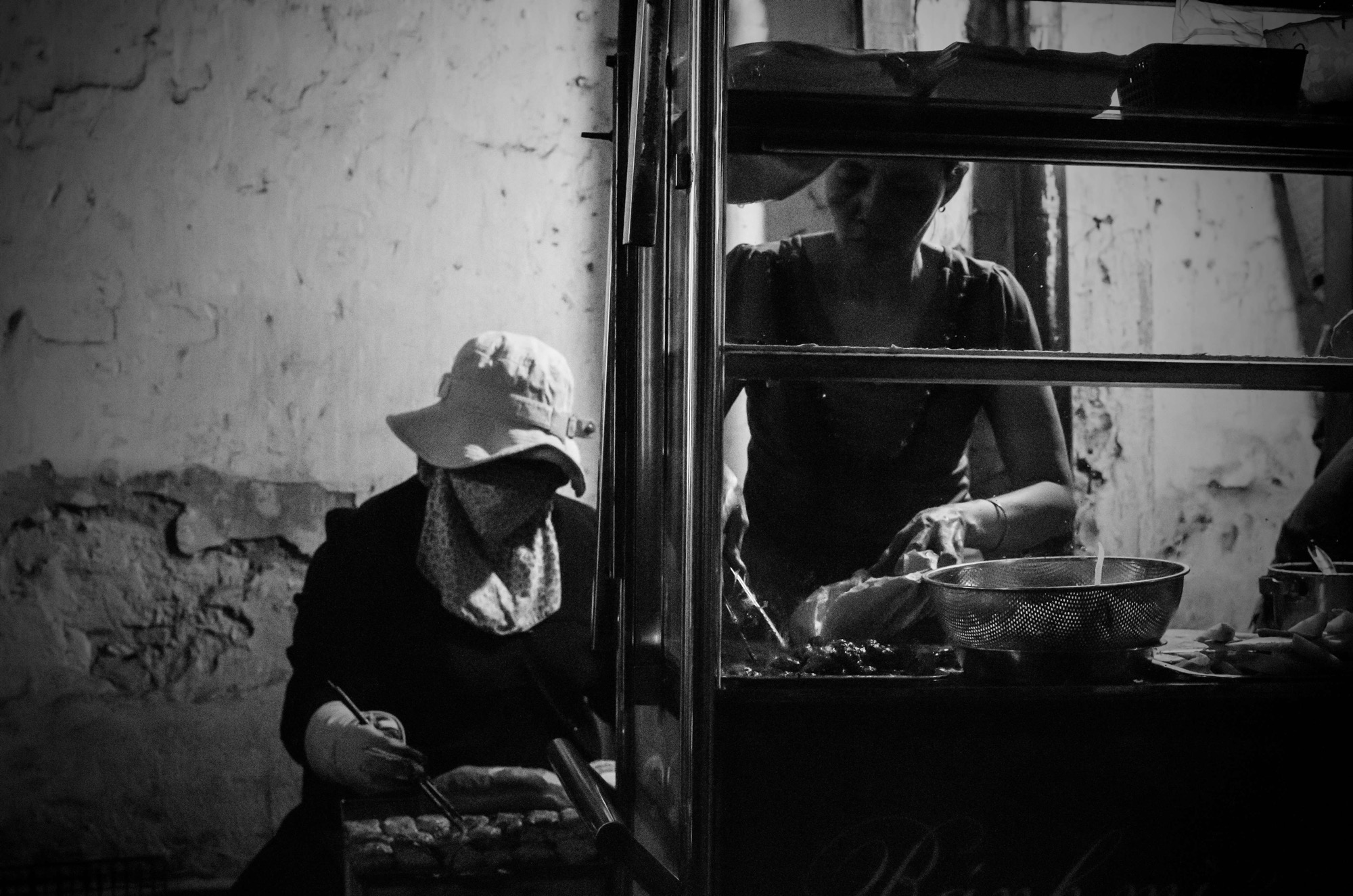 Our first taste of street food, a discrete alleyway crawling with customers for baguettes from this mysterious character we dubbed the Dark Heron due to her sharp snapping chopsticks, Ho Chi Minh city, Vietnam

Food stalls in the amazing Dalat market are like islands in a raging river; the world flows all around and flocks towards them, Dalat, Vietnam

On guard. Food vendors are feisty and customers need to be firm or else end up buying more than bargained for, Hoi An, Vietnam 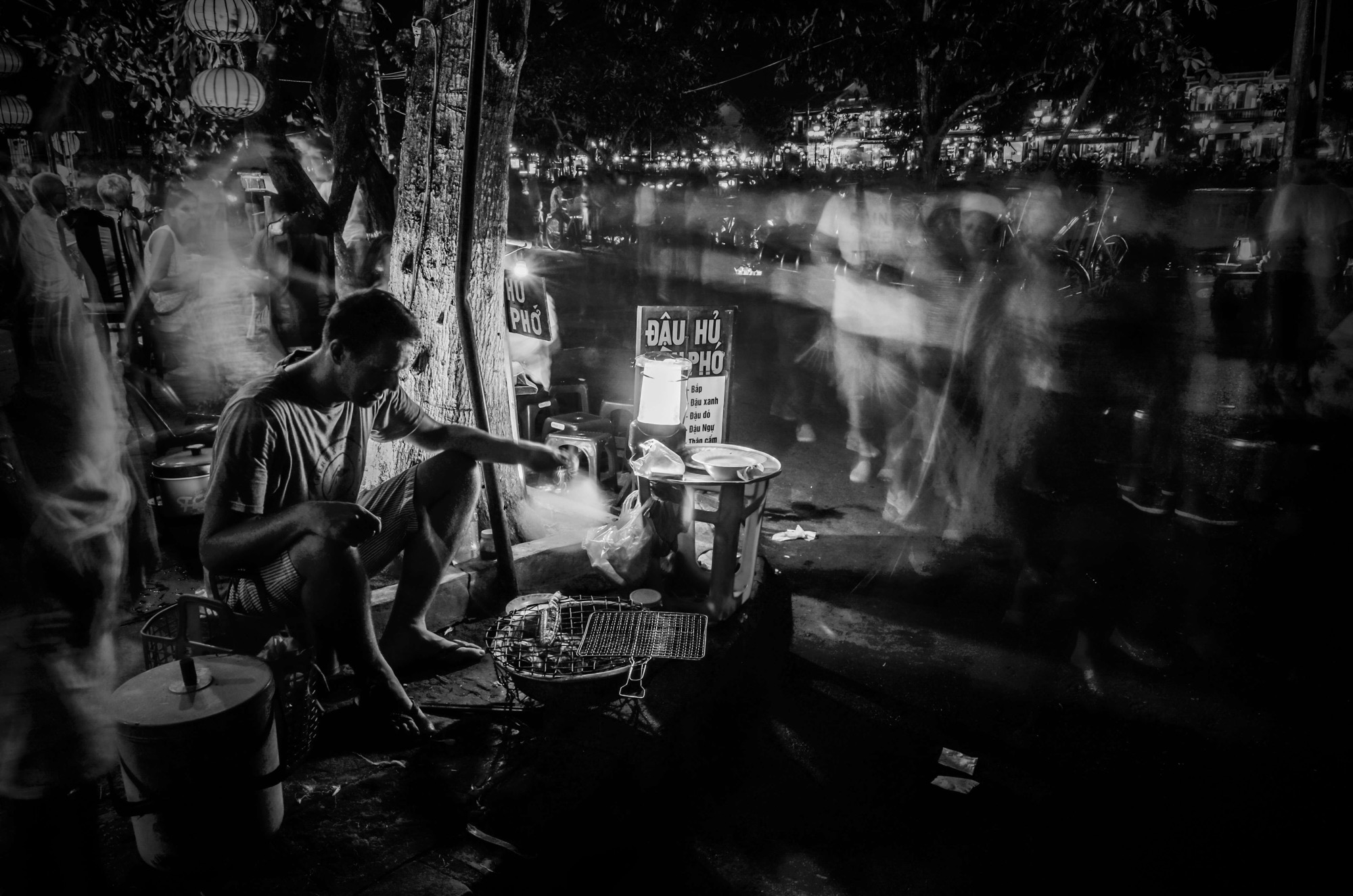 Steve showing the loacls how it’s done as the busy riverbank of Hoi An stops for no one. He did burn the corn though, Hoi An, Vietnam 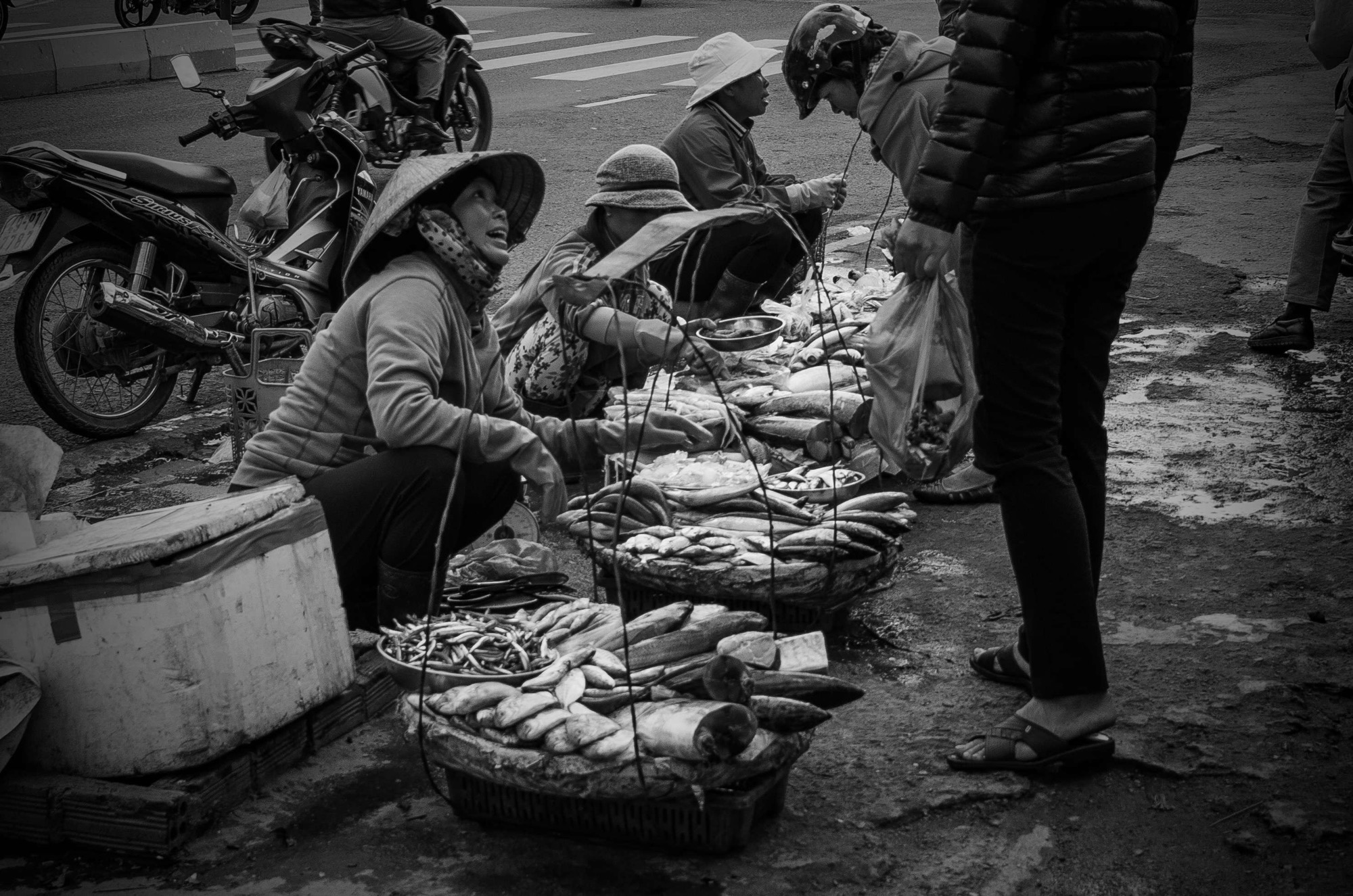 From swimming to in your bag in seconds, selling fish is fresh, frenetic and a sight to behold, Dalat, Vietnam