Just when we thought that this great adventure was taking its final bow with the spotlight slowly dimming to cast the once bright features into shadowed shapes, a little visit to the island of Miyajima set fire to the stage for an encore to thrill the crowd. Far from the introspective amble that followed our minds which have already cleared customs in Sydney we’re back in the game and back into squeezing the last drops of adventure from this trip that’s all of a sudden not over yet. Our senses are once again heightened, our eyes are wide open staring at the spotlight and most importantly our taste buds are rustling the familiar call for attention. On our way from the very sobering and serene Hiroshima region, we’re off for a little stopover in Kobe before heading back to Osaka once again. Like piecing a puzzle together we’re in Kobe, Aki is popping across to meet up for the day and we’re desperate for food: if this is a puzzle, the box is surely marked ‘for 2-4years’, there’s only one option. In culinary terms, Kobe plus hungry boys equals the famous Kobe beef.

In a twist that we’re likely to never let him forget about, Aki leaves us stranded at Shin-Kobe train station unable to contact him and not sure where he’s booked for lunch. It appears that the one of this trio that can speak and read Japanese caught the wrong train, enough said on that matter. The encore has commenced, the concert hall is hushed and we are temporarily left stranded on stage staring at an expecting audience with no music yet to cue us in. A bashful Aki struts with a little more purpose than usual towards us, apologising all the way to finally rescue us; the show must, and will go on. 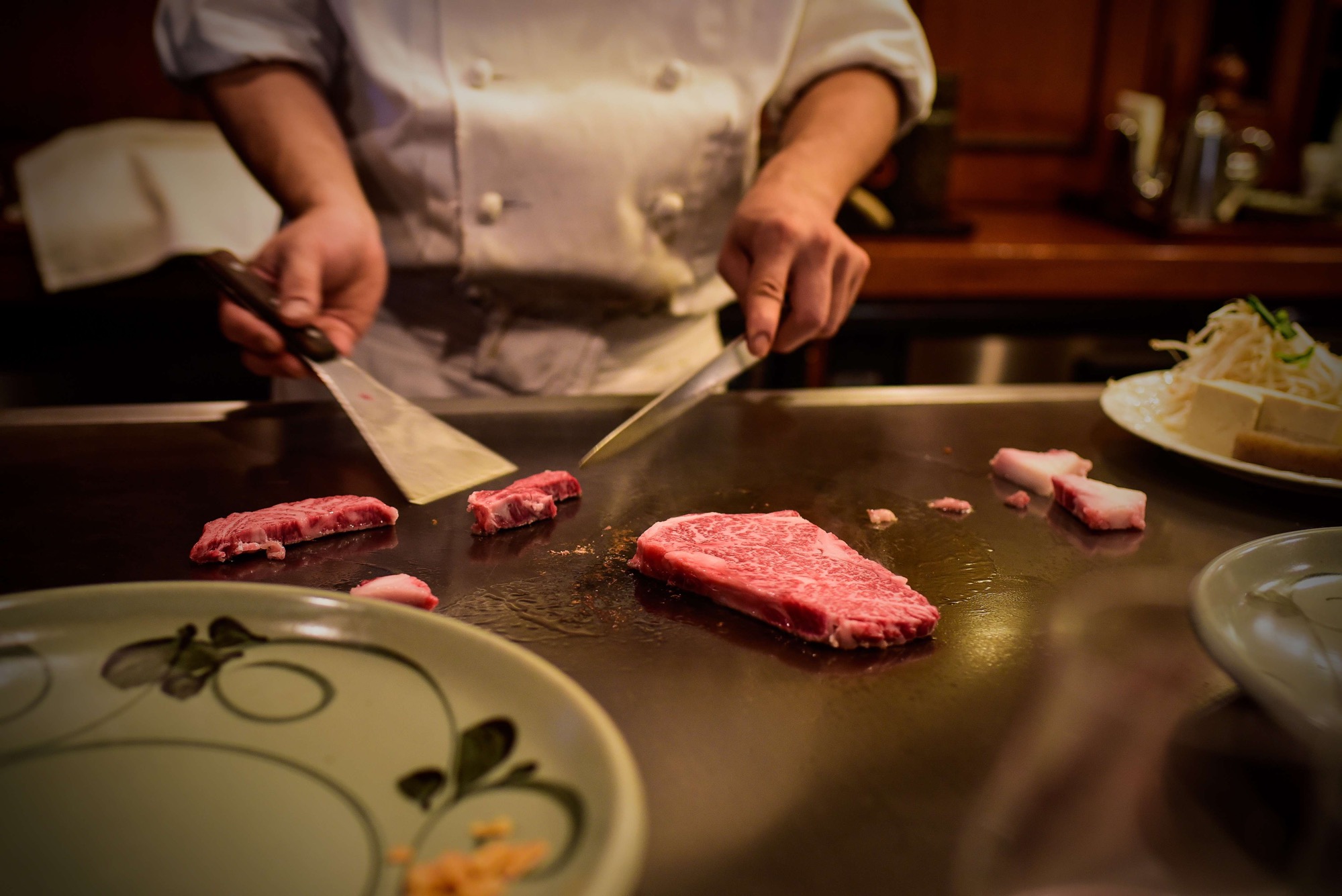 Kobe beef being disected on the hot plate, Kobe, Japan.

Walking the few blocks feels a little like the very average start up band that fills the gap before the headline act takes the stage; something something architecture, cute gardens, cool shopfronts, shrines with inserted clever parallel to Japanese culture or history. Fill in the blanks for us will you, there’s little on our minds beyond beef, cow, wine, steak and- or meat. From an otherwise benign street of clean footpaths and linear buildings that carry little charm, we step under a domed red awning that invades the footpath with the arrogance of a celebrity spotter hotel to three tight little steps that crush the outward flamboyance. In a rush of air conditioning we move from Japanese urban conservatism, past celebrity pomp and through a door that feels like a broken secret into a posh English pub with a dash of sexy gentleman’s club. Surrounded by dark timber and old world brass fittings our dimly lit room glows from the hot plate that is the bar as much as from the lights overhead. The stage is no longer this adventure, it’s the shining metal expanse before us awaiting the real star we’ve all come to see.

On a neat little timber board the stage glows as the headline act all but drinks the light from the room; it’s Kobe beef. It’s possible we’re being a little dramatic and it’s reasonable to accuse us of being a little hungry but all eyes are on the thin slabs of beef that seem more marbled fat than meat; yes this starlet is a plus size dame and we nearly burst into applauds to defy the demure space. With a sizzle the star sends this audience of three into rapture, as they say in showbiz, she owns the stage. Hisses and bubbles exude sultry desire as we’re all fixed to the spot watching the star dance about the stage at the push of spatula and the slice of knife; this really is show business.

Walking off the lunch and bottle of wine…in Japan, checking out the local shrine. Kobe, Japan.

From the slab of marbled beef the chef expertly slices away the fattiest parts to sit at the slightly cooler side of stage to render to deliciousness while the pieces that threaten to have some flesh in between the fat are returned to the timber board to await the second act. As sections of fat sizzle and dissolve this steak is not placed on our plates whole. As each mouthful sized section is just perfect to be eaten, it’s placed on our large ornamental platers to be enjoyed with garlic, salt, pepper or one of two sauces at our choosing. The chef, the director, makes the star dance balancing the cooking process, picking off pieces to be eaten directly from the plate to our mouths as they touch the moment of readiness. Not a mouthful of this wonder enters our mouths unless its at the exact perfect moment to be consumed. Eating also acts as a reminder to stop us gaping for the need to chew. But we don’t need to chew, it dissolves into a sizzling cloud in our mouths but we chew from habit all the same.

The star dances, the fatty parts render to a crisp and the fleshy ensemble rejoins the stage as the narrative of this theatre is played out to a climax of excitement that threatens to become downright sexy. We’re not eating steak, we’re witnessing a theatrical journey being fed a piece of perfect cow, mouthful by sumptuous mouthful. Just like a brilliantly composed script we’re delivered twists and narrative turns at all the right times, dissolving flavour bursts are followed by fleshier texture to be capped off by decadent fatty explosions as the threat of sexiness becomes a mere threat no more. I feel like a cuddle and a warm hand towel. 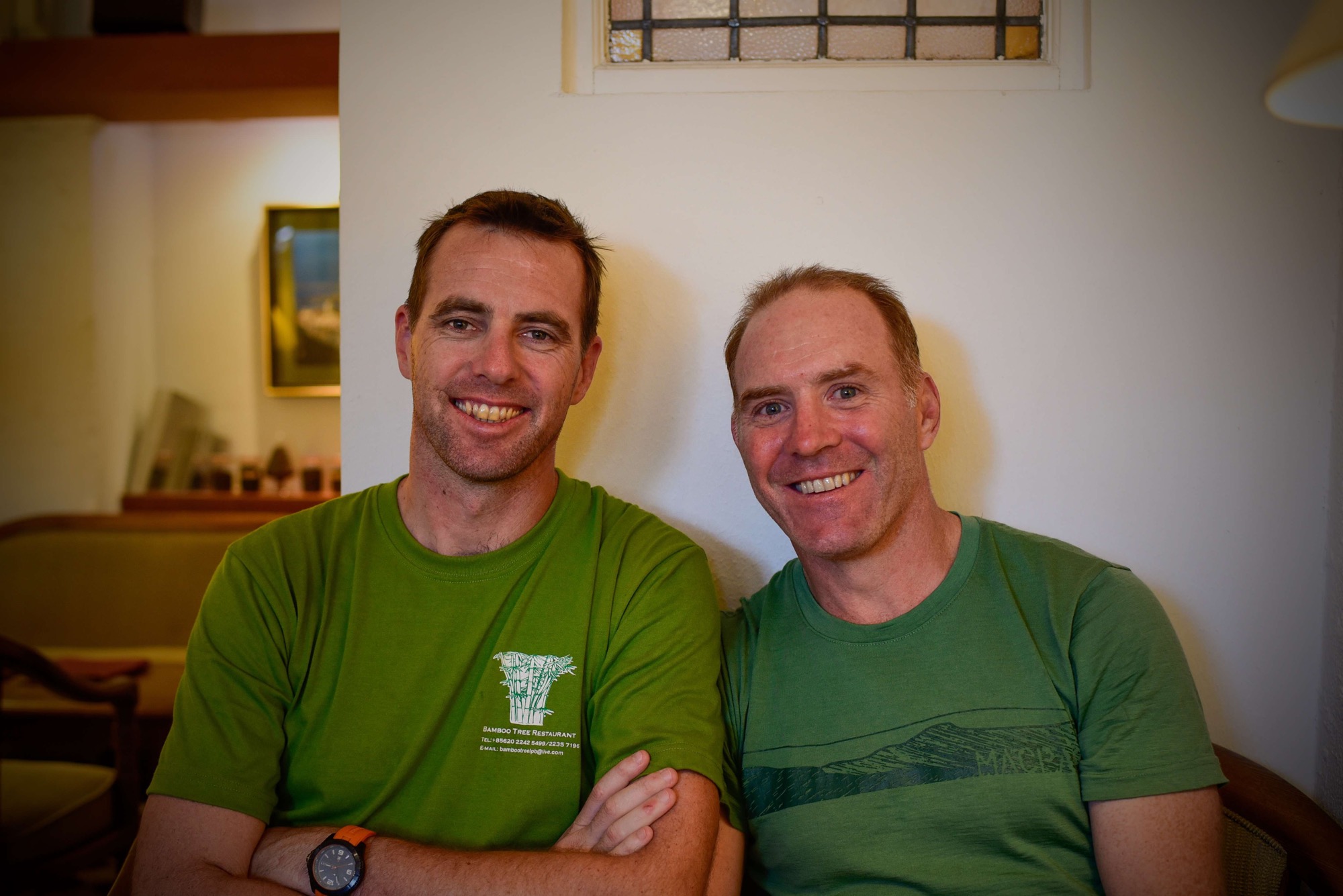 As the director literally takes his bow the show draws to a close and there is a star on the stage no more. We exit back onto the street as if from a great show, alive and gossiping excitedly about our take on the performance. This morning we felt like the stage was alight again and our show was back under way but there’s always a brighter star. For now these greedy little boys are happy to wait in the wings for the spotlight to shine brightest upon another, the plus size star that dances no more the dance we’ll never forget.