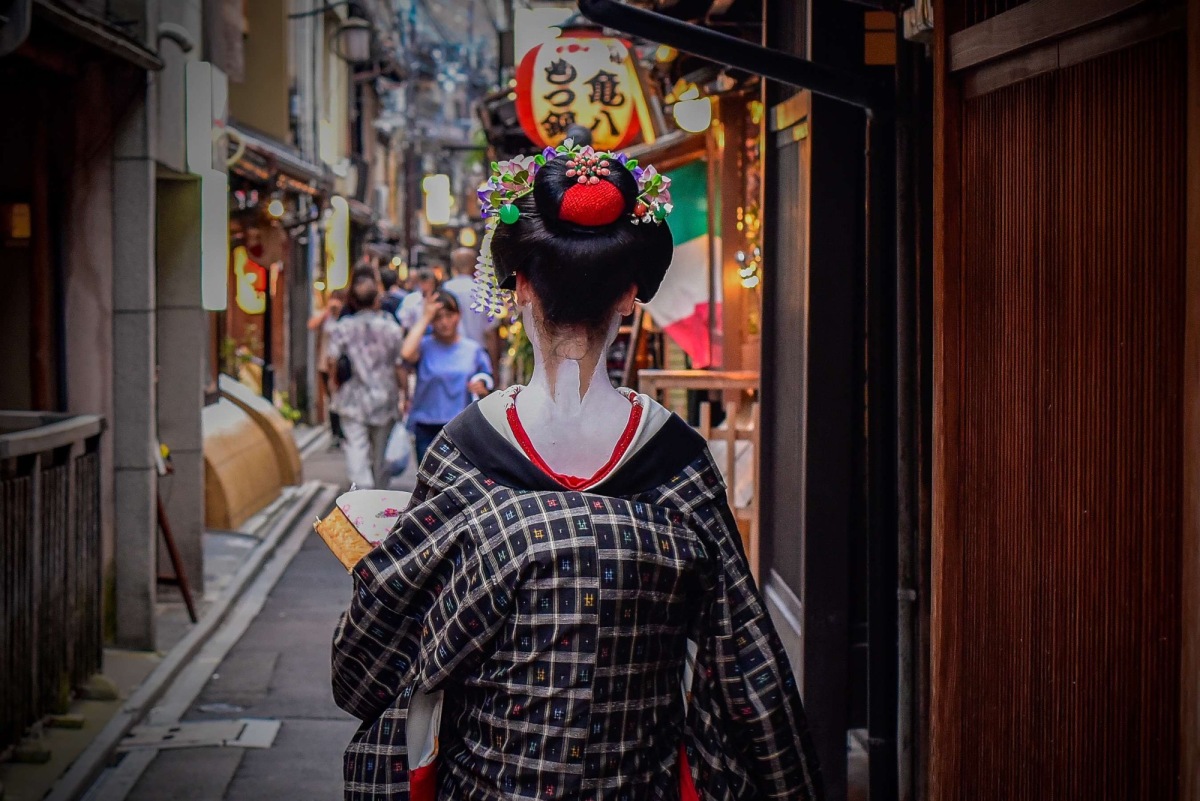 The snow leopard, the white whale, the blue sheep; all mystical creatures the stuff of fables. Adventurers and hunters alike have sought out these fables made real as much for a sighting as anything else, their rarity captivates, enthrals and intrigues. Again today we search for our own mystical fable: geisha. These captivating ladies are not only a sight to behold, they’re discrete and rare too catch by chance in the streets of Kyoto that seem to be their natural habitat; but what is a geisha? The simple answer is that geisha are highly trained performers adept at a range of traditional arts who entreat their customers to a true Japanese traditional experience. Geisha is actually two words: ‘gei’, meaning art and ‘sha’ meaning person. The closest translation is really artist or artisan, the geisha transform themselves to human art and one look abolishes any question to the lofty designation of human art form.

In the narrow streets of Gion, the area of Kyoto most famed for geisha, we have spotted these elusive ladies twice, fleeting glances of embodied grace with white painted faces engulfed in mountains of luxurious fabric to disappear in tiny shuffled steps too quickly than seems possible. Seeing a geisha is one thing, taking a photo is another and that’s Charlie’s mission, the hunt, that is building to the point of obsession throughout this time in Kyoto. Like orcas in Argentina, gibbons in Laos or lions in Africa, some things however aren’t meant to be, we enjoy the streets for the beauty that they are and Charlie contents himself with the still captivating image of a painted nape retreating down a tight laneway among the more common sighting of regular ladies in bright kimono. Charlie is no longer just a photographer, he’s got his hunting cap on and he’s not willing to give up just yet; it’s geisha season: game on. 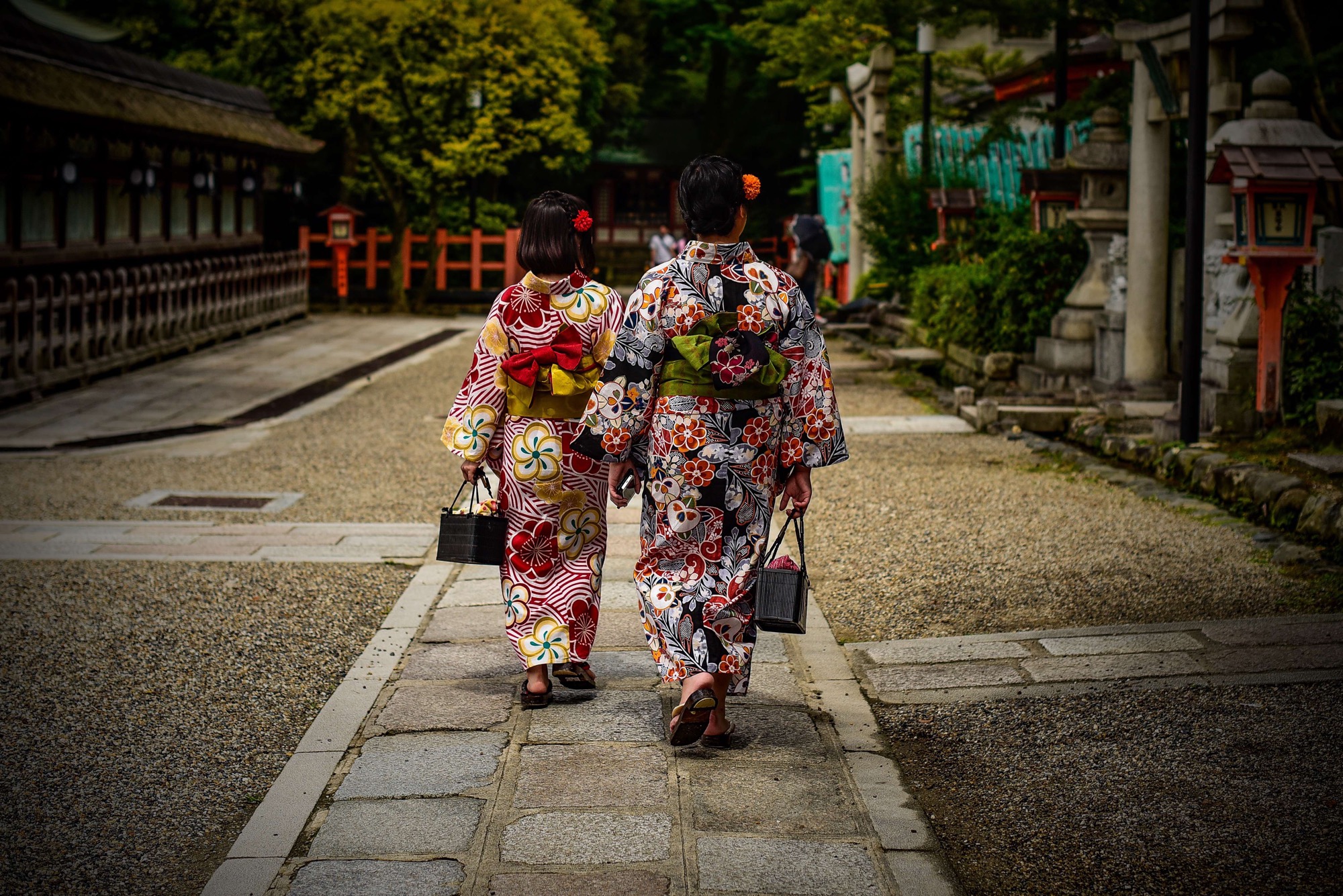 Japanese ladies dressed in kimonos, enjoying the temples of Kyoto.

In true elusive fashion it’s glimpses alone as the geisha live up to the romantic notion that they live in a separate reality, the flower and the willow world. In past times the courtesans were the flowers and the geisha were the willows, termed so for their embodiment of both grace and strength. From a young age, girls set on the path to live lives as geisha, undertaking years of training in various arts to become maiko (apprentice geisha), not just adorn the costume. Through many stages of observation, tutelage and guidance from an onee-San (older sister) a geisha follows years of protocol and formal progression toward a vocation at becomes an all encompassing life. For now though, these hungry boys are calling a halt to the hunt which means that it’s ramen time.

From all over Japan each region has it’s own signature to the soup noodle dish of typically pork bone broth, and we’re out to try as many as possible, it takes a bloody good soup to call a stop to a geisha hunt. With Kyoto being a hub for Japanese culture the range on offer is immense, from salty soy based versions through to rich miso and nutty sesame, the humble ramen noodle turns out to be not so humble at all. The diversity is what catches us by surprise most of all, somehow ramen seems to cover all shades of flavour between the delicious simplicity of Vietnamese Pho to the punchy potency of a Thai curry, two wildly different dishes that had no connection, until now.

One of the many flavours of Japanese ramen we tried. Kyoto, Japan.

We really wish that someone would have said to us at the beginning of this trip that we would be scouting out a department store food court to buy tickets and wait in a queue for noodle soup. Oh how our disbelief would have bordered on outrage. So we wait in the queue of the Isetan food court along with the rest of the faces staring too close at smartphone screens with not a trace of embarrassment for our predicament. All we care about is getting ramen, we’ve toured extensively around this island nation on trains, we’re now doing it all again with our tastebuds. Today the rich soup, more like a gravy, explodes with a combination of miso and garlic topped with fatty scallops of pork; we never said it was a good dieting option, just that it was delicious. Eastern Honshu, you’ve officially been tasted.

With the lead weight that is a huge bowl of ramen safely in our bellies where it belongs, we wander out to resume the hunt for geisha, it’s back up to Gion. In truth, the streets of Gion are an attraction in themselves with temples every second block interspersed with small gardens, tight laneways and stores of sweets and ceramics at every turn. We share the cobbled streets with an abundance of ladies, and some men, in kimono feeling like we’re whisked back to another time to share a day out with Japan’s social upper crust. Away from the thrum of the crowd we take a veer down a laneway written up as possibly the most beautiful street in Kyoto and immediately the volume of the bustle decreases and the age worn yet impeccable timber facades close in a little tighter. We look backwards to a roaring main street from our tranquil laneway escape a little like perceiving the waking world from a dream, the flower and the willow world perhaps.

This alleyway is Japanese grace exemplified, stone paving at a bend holds nothing but a single pot with a trained tree as greeting to a doorway which reveals nothing of the bold promise it suggests. Nothing of the laneway is straight, slight bends keep our vision, our world confined to a focused space as stories and hints pour down upon us from this slice of Kyoto that is nothing but aged stone, character filled timber and a host of suggestions and kept secrets. If ever there was a place that summed up the allure and mystery of a geishas face hidden behind a painted fan, revealing nothing but the suggestion of a glance, this laneway is it. For a moment the world outside carries on as we observe from the world of the flower and the willow.

The laneway twits and turns, secrets hinted yet never revealed as each bend as Charlie pulls up the camera quick-draw style. So reluctant to get in peoples faces Charlie has settled for the artistic representation of elegant visions of Kyoto, all hint and suggestion. Now though, a bold impetuousness has hold of him, he’s adopting his typical striding stance as the hunter takes aim at his target. In this laneway of flower and willow four geisha ladies are walking directly towards Charlie and like all good hunters there is no hesitation, he shoots, shoots, and shoots again. Discretion is out the window, driven by the unreality of this situation, this world we find ourselves in the hunter is in for the kill; this is the white whale, the lion, the gibbon and the blue sheep all in one. 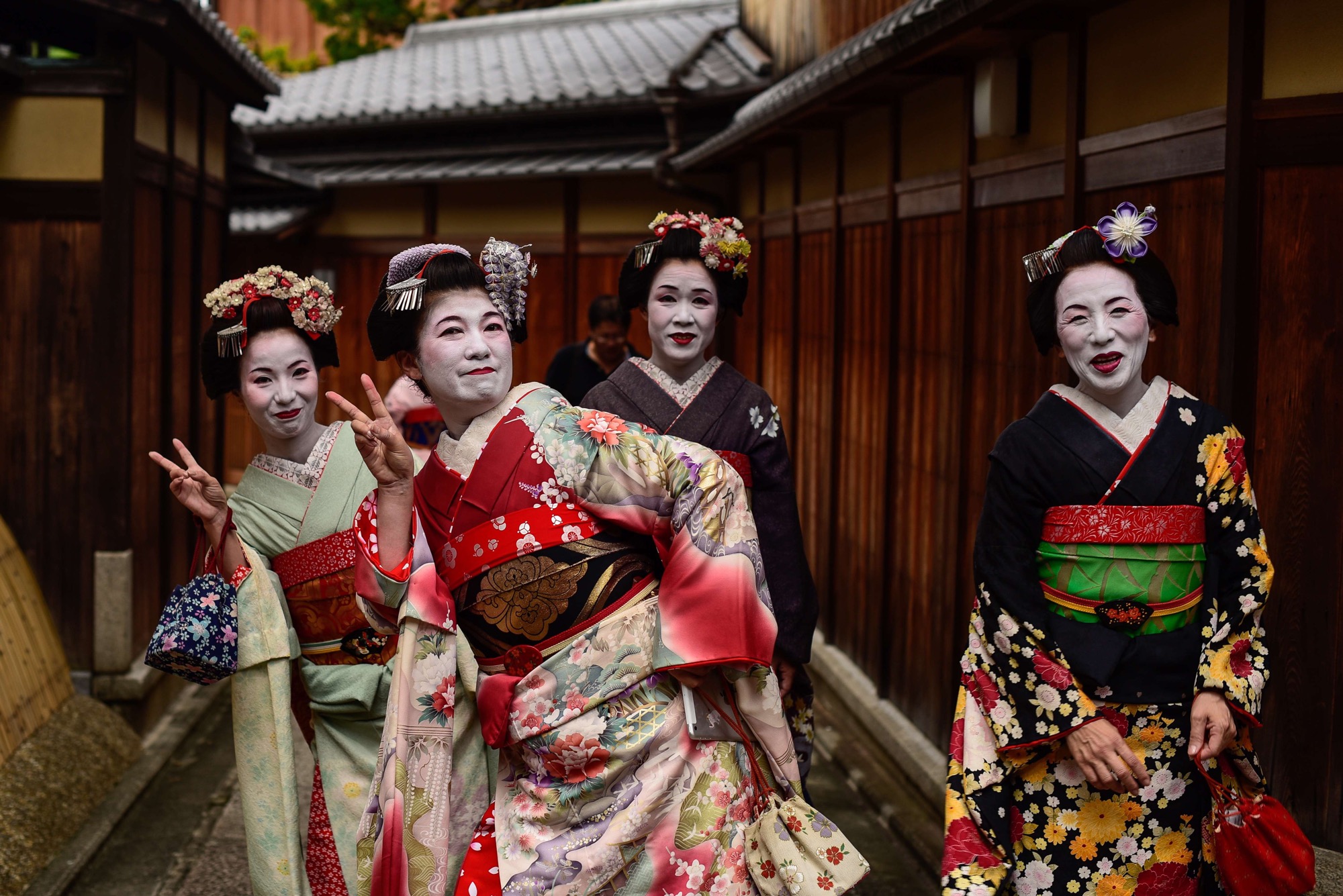 The rare geisha caught on camera in a magic Kyoto moment, Kyoto, Japan

It’s a precious moment, I’m rooted to the spot just watching the geisha stopped dead at the shutter of Charlie’s camera snapping without halt. So what do you call it when an unbelievable situation becomes somehow even more surreal? You call it two of the geisha leaning to one side with two fingers signalling what we’re now calling the ‘Asian selfie pose’. The two more discrete geisha stand still with mirthful grins while the camera shutter continues still, unlike the shutter of my mouth that has stopped working all together leaving me gaping like a constipated goldfish. If geisha means art then I for one am a believer; in no gallery, exhibition or theatre have I been quite so stopped in my tracks as I am now. On little steps the four visions of art shuffle by to disappear into the growing crowd that come a little too late for the moment they wanted but we alone were treated to. Looking back they’re at the end of the lane now, just a few shuffles from the real world, willows wrenched from the ground and transplanted into a world that isn’t theirs but we view them still, from the world of flower and willow.