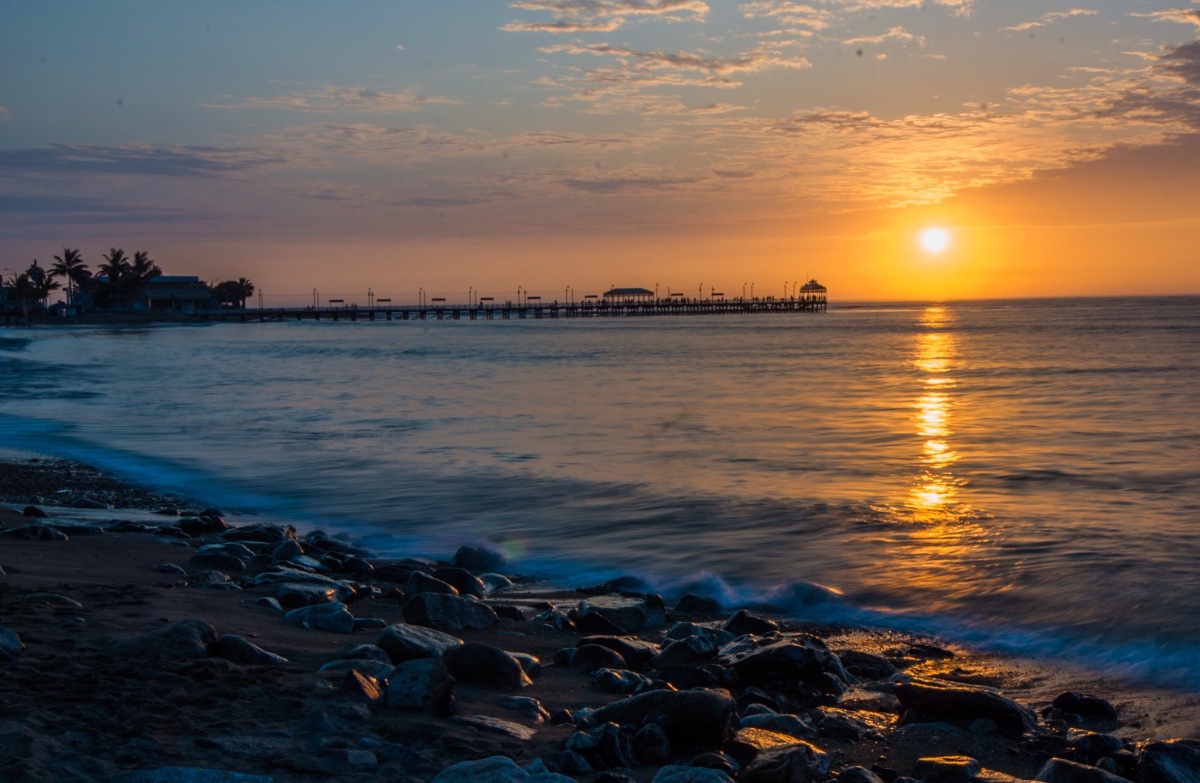 It’s travel time again and this one is gonna be a doozy, we’re travelling from Cuenca in Ecuador to Huanchaco in Peru, it should be about 17 hours hours over three buses leaving at 9:15pm… hateful. We’ve opted for a big leg as much of what we want to do in Peru is down the south so we’re biting off a big chunk to get the distance behind us. So board the bus we must, at least this time Ola and Piotr are travelling with us so it should be amusing if nothing else. We’ve also got that other phenomenon of pretty much everything not suiting tall people. As a broad rule South American people are usually a little shorter than in Australia, so as I embrace having my knees as faux earrings for the next however long I summon passivity into that trancelike traveller state; just need to get through this.

The bus all said and done is bare-able and we have our first stop of this journey. As we approach the border, at two in the morning, there’s a bit of a a shuffle along as about a third of the bus gets off, but not apparently us; it’s seriously the middle of nowhere so we’re not sure where those people are going? But shortly ahead we arrive at immigration only to be told that this is the Peru border, we need to exit Ecuador before entering Peru. Back to the bus we go. So backwards we go about 5 minutes up the highway in a tired state rueing every metre we’re travelling in the wrong direction. So exit Ecuador we do and we’re back on track, we hope. There’s a few people that don’t get off the bus at all, clearly this is not the Israel/Palestine border. Still no sign of the early leavers from the bus we get it all over and done with and we’re on our way. I’m sure the group that we’re leaving behind know what they’re doing but we take off seriously thinking that we should alert someone, ‘stop the bus, you’ve left people behind’. But tiredness and a lack of desire to articulate far more than our Spanish allows sees us bedding down for another attempt at sleep.

With a few hours nap managed while being contorted like a Romanian gymnast we slowly stir to the forming light of a new day and a new nation on this most excellent of adventures. Without doing any real research I am quite dismayed to look out of our bus window at a scene that is nothing short of bleak. Obviously I know now that much of Northern Peru is desert but coming from the lush tropical alpine greenery that was Ecuador, this scenery made the waking travel haze even more challenging than usual. Taking more than just a short moment to orient ourselves and rationalise that we are indeed where we want to be, we settle in to take in the jarring visual scape that we have laid out before us.

There’s something a little odd about looking over the Desierto de Sechura, this expanse of nothing, it’s that it’s not quite nothing at all that creates the consternation. Where deserts are inevitably somewhat foreboding, the open expanse, monotone colours and harshness scantly betraying a beauty all of its own; it’s usually a far more balanced scene. Here however it tips clearly over into a less balanced feeling of clear desperation and grim sadness. Punctuating the nothingness is an overwhelming presence of rubbish. Some sections are indeed just for this purpose, open rubbish plains abutting the road clambered over by dogs and vultures alike. I guess this area is just seen as unusable so it’s basically landfill, the atmosphere created more like an emotionally confronting scene from a post-apocalyptic movie. Welcome to Peru.

The other layer of visual confusion to greet us is the vast arrays of semi construction. I say semi construction as huge open spaces of dwellings and townships seemingly fighting to simply exist here are largely open shells, often barely a few incomplete walls. The first flashing thought for me here is that we are entering a country so famous for Inca ruins and it is how these repeated scenes appear. Where there is romance in the relics of a once grand civilisation, the modern ruins here are bereft of romance, they look a little depressing. I can’t help but think that the Incas were a mighty civilisation that failed, this seems like a civilisation that has prophetically failed before it even began, both ending in ruins, albeit carrying vastly different stories to their graves.

First bus change in Chiclayo; not a lot to report except that I’m glad we didn’t choose to stop here. It’s dirty, messy and with the city seemingly failing to fight off the advance of the desert, it’s pretty grim. On to Trujillo, the penultimate stop on this odyssey and again, pretty grim. The repeated theme here is simply a staggering amount of rubbish, everywhere. I guess we’ve been spoiled by Ecuador so for the moment it’s a weird sight; Peru so known for tourism and it looks like this? Definitely something to adjust to, it’s a bit of a surprise.

And finally we arrive in Huanchaco, only a touch over 20 hours from Cuenca and we’re smashed. On the plus side we arrive just in time to dump bags and catch a total winner of a sunset over our doorstep beach. Right now the harsh confronting scenery we travelled through for much of the day has made for an appreciation for anything beautiful, and beauty is definitely what we have here. 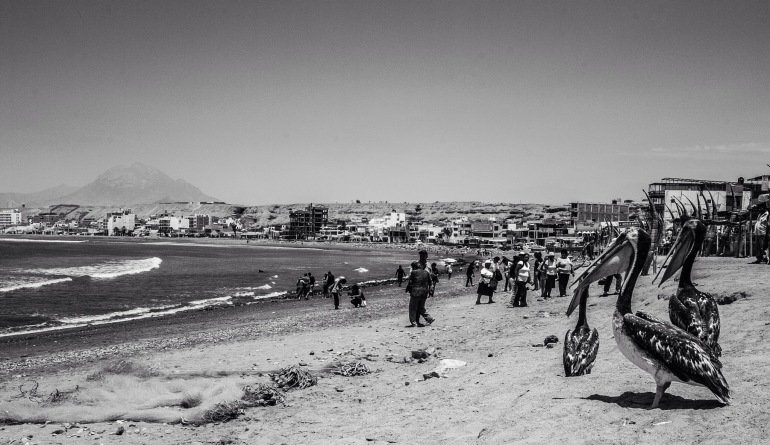 Food time. We have had our sights on ceviche (cured fish common in this part of the world) and with a quick tip from the hostel we venture out to bring this longest of days home with a bang. And holy crap what a first meal in Peru. What could possibly offset this horror of this day better than the most amazing ceviche we’ve ever had, seafood soup and freshly caught sea bass barbecued over blazing coals on the street right in front of us. Our mouths are watering and our belies are thankful, while desperate hunger does bias the judgement this fish is possibly the best fish we’ve ever had, outstanding. We also sate our developing alcoholism with the national drink, Pisco Sour, and does that go down a treat, we need panty liners immediately.

Our first meal in Peru with Piotr and Ola 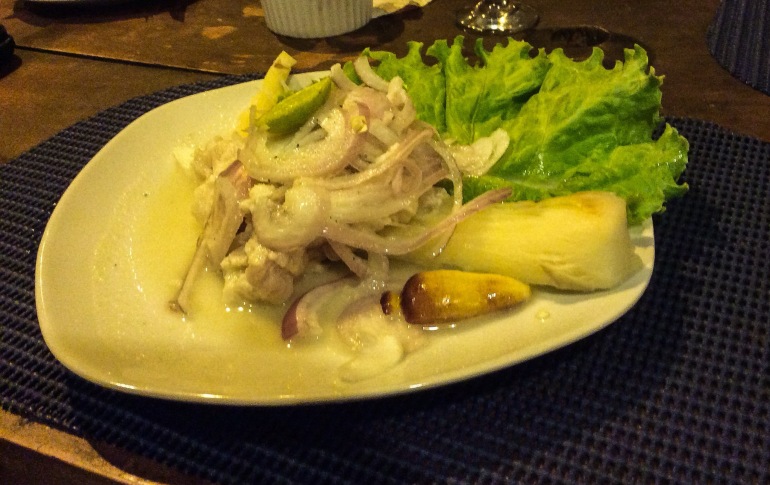 With the harshest of introductions, Peru has drawn us through a sort of Indiana Jones style penance, before revealing all that is wonderful in the kit bag to only those who persist. With this greatest roller-coaster of a first day drawing to a close we venture a last walk out onto the pier, flanked by fishermen and watched intently by hoards of pelicans we soak up the smells and sounds of the sea and its crashing waves. From an unsalvageable day Peru has played its ace late in the hand like the canniest of poker masters. We are now suitably disoriented and our newly refreshed perspective waves goodbye to whatever we thought we knew about Peru. So come on Peru, surprise us again, we dare you.