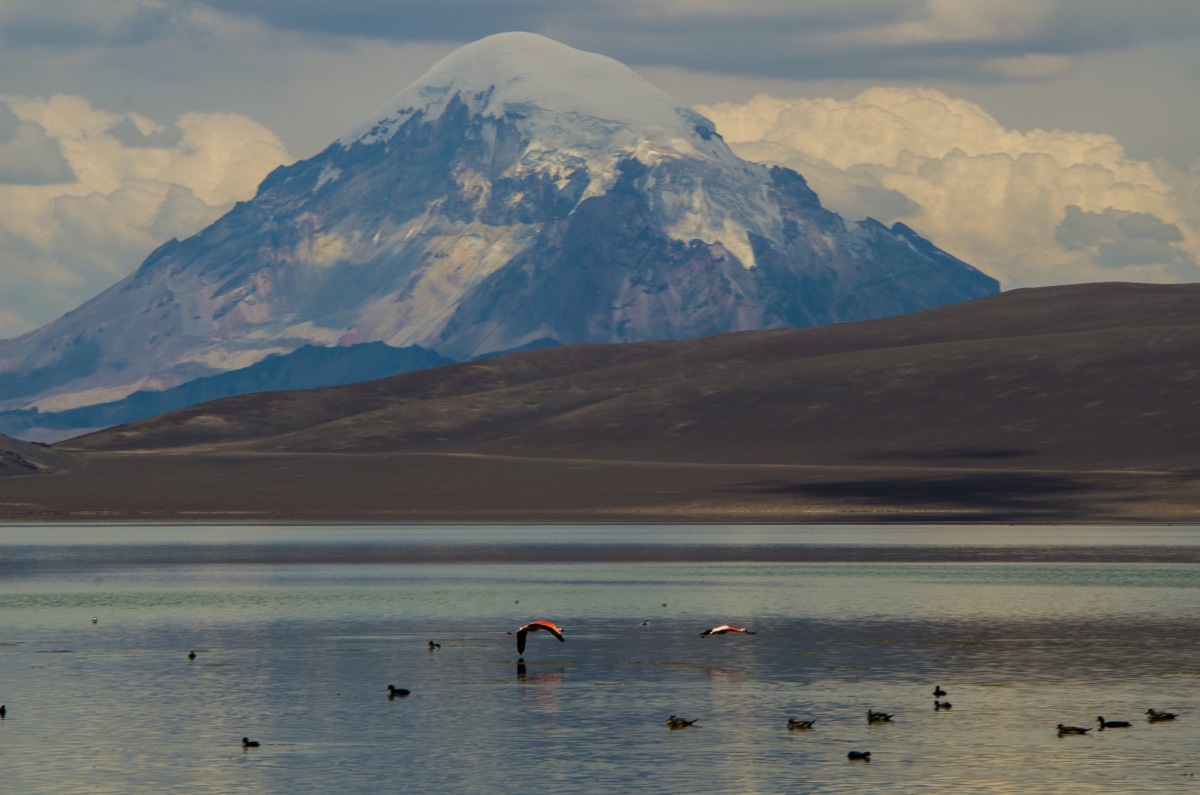 The desert is calling us, words I never really thought I’d say let alone type to be immortalised to the world, but call it does. With scant time to spare we are desperate to launch ourselves however possible into the desert and indeed an environment we’ve been eyeing off like a good looking chap at a school dance, keen to make an introduction but trapped on the other side of the room. We’re at altitude zero and these little alpine ducks need to get on a bus to feel quite at home so it’s onto a local tour we go. There’s not much adventure on this trip, more of a sight seeing journey but it’s all we have on offer and it should more than suffice. Arrival of the bus confirms our suspicions with a gaggle of old Chilean ladies aboard we’re at little risk of breaking a sweat today.

Stuck at the back of the bus with a Polish couple, yes there is a trend developing here, we are quickly identified as the non-locals of the day, good fun for all involved it seems. The first to break the divide is a tiny little pocket of a woman who charges up to the back of the bus and starts going crazy in Spanish. She’s offering us Coca leaves which help with altitude and also act as a mild narcotic. While she chews away like a hero on a western movie on tobacco I begin to wonder about the term ‘mild’ in the description of the narcotic effect in play here, she’s going troppo. The Polish refuse politely but we’re game, we take a couple of leaves each and begin to chew as she howls back down the bus in gleeful celebration of a triumph we can’t determine. Note to the world: coca leaves aren’t a gastronomic highlight. Wow they’re bitter and potent but chew we do, happy for anything that embeds this first real desert experience into our minds.

Oh and by the way mums, we believe one or both of us might possibly have agreed to marry a small Chilean woman, news to follow on that one. We can only hope that coca induced proposals on a cramped tour bus aren’t legally binding in Chile. 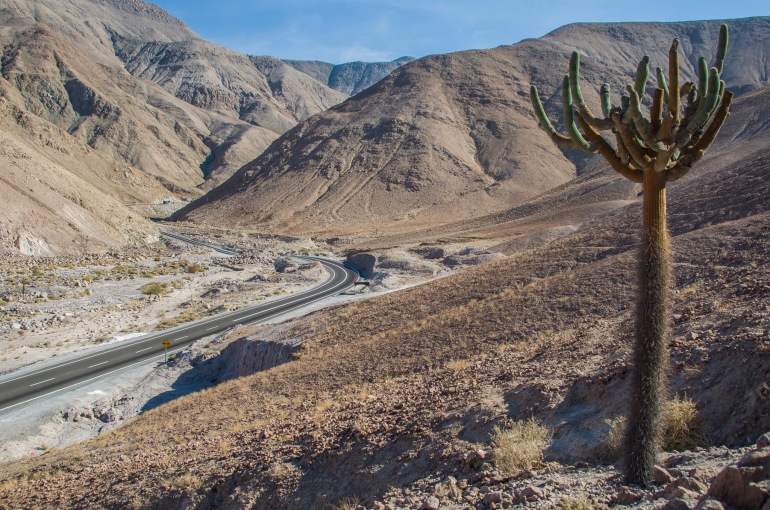 As we climb the heights the view is puzzling in some respects. There’s no doubt it’s captivating, evocative and powerful but for me this familiar mix of emotions comes with the juxtaposition of being delivered by a vista that opposes the usual origins of this mix of sensory invasion. Feeling this response comes to me from big mountains, cliffs, jungle and all things green or snowy white; here is everything opposite. It takes a short while to see past the messenger and take the message on its own; it is only then that I start to ratchet up the joy at being in a place like this. The picture comes into place and the messenger takes form as we climb a little higher, the passive slopes of dunes gives way to the more aggressive scape of true mountains with sharp gorges carved out of the desert landscape in all of natures dramatic fashion. At the risk of sounding super camp I feel a little like Judy Garland: There’s no place like home. 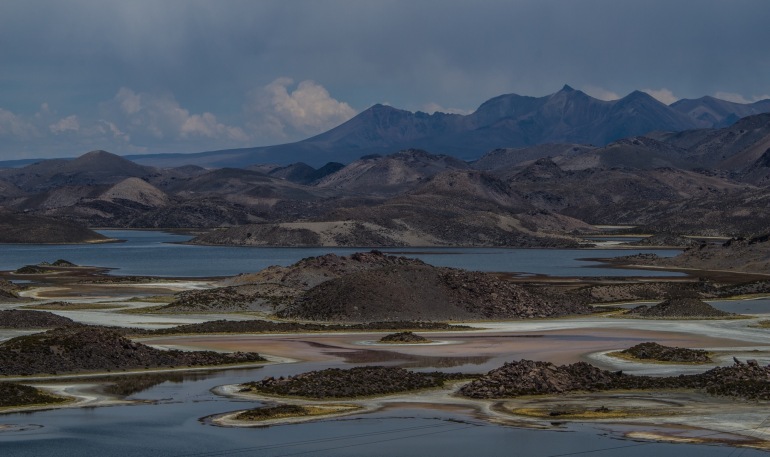 The trip carries on and the higher we get the more at home we feel, the final ticking of boxes comes with the presentation of a volcano, a big conical snow capped beauty. Indeed there’s a bunch of them up here, it’s becoming more and more obvious why this drive into the mountains is so highly rated, it’s awe inspiring. Completing this picture of contrast is that there’s a fair bit of water about. Don’t get me wrong here, it’s a desert for all money, dry as death itself but it seems that maybe just underground there’s plenty, we see water seeping out of rocks, small marshes, streams and even waterfalls all seemingly laughing in the face of the desert about it. This is really strange and an intriguing element to the landscape here. The Atacama desert is the driest place on earth in terms of rainfall but not in terms of water itself it seems.

At the peak of our climb up the mountains towards the Bolivian border we’ve reached a hefty 4500m and breathing isn’t the easiest thing ever. Except for our new fiancee, she’s still high as a kite but no news on the nuptials just yet. Strangely enough right up here we see the most water we’ve seen, lake Chungará sitting at the base of two volcanos, Parinacota the grandest at 6350m. This is just rude, just rude. A salty altiplano lake with crusty white and yellow trim supports flamingos, ducks and god knows how many other birds enclosed by a stellar mountain range that look like a drop in movie set, it’s just; rude. 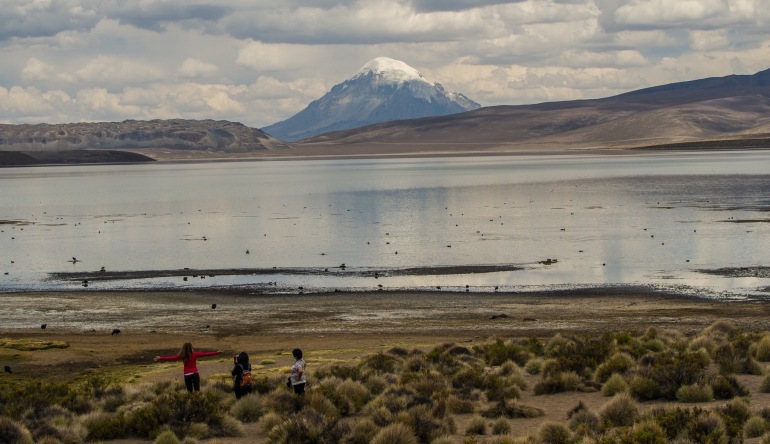 There should be better words for when childlike wonder slaps an adult in the face and reduces you to a gaping fairground clown. Charlie is also a kid in a candy store with his new camera going nuts at anything that moves, and I mean anything; lets just say that we have enough pictures of flamingos to choke a pelican. Jokes aside this is a place to engender imagination with so much to see that seems like it’s too bizarre to exist and it’s all right before your eyes.

Yes indeed the desert is delivering in all manners that the more lush mountains do. Replacing the gently imposing power of mountain ranges as we know them is the more openly aggressive harshness of the desert; a similarly powerful message delivered with an iron clad fist. Now there’s a new environment rapidly pushing into the crammed space of places we chase, mountains, diving, volcanos, vineyards and glaciers now have new company in our itinerary. And in such an extreme place as this people do thrive, the small town of Putre, site of our lunch, stands defiant to the desert and all the extremes it musters. 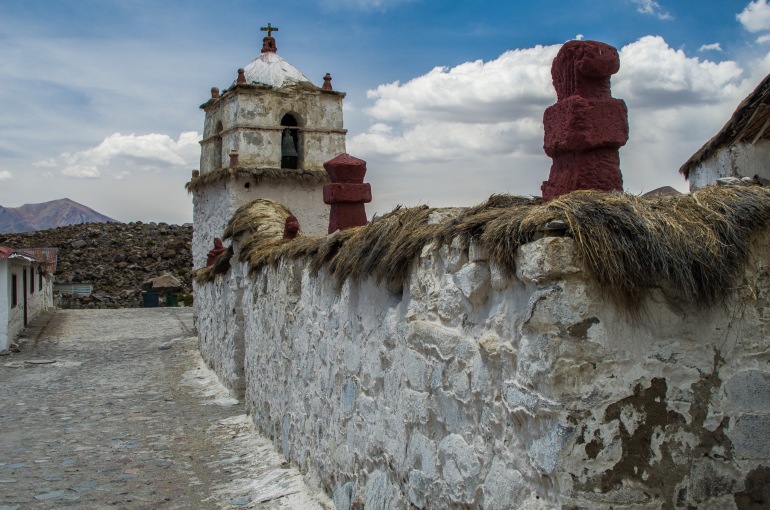 In societies like mine, we live in a comfortable middle ground of comfort, we shy away from environments of extremity. With so much of our lives spent creating buffer from the sharper edges of nature it’s no wonder that the harsher places engender such reaction. Do we romantically see ourselves thriving in such places, a comment on our lofty self assigned and conveniently unchallenged sense of power? Or are we truly appreciative and humble in the face of what is clearly more powerful than we are? I wonder now if that’s a line of questioning I’m even able to honestly ask myself.