Christmas is done and we’re thoroughly detoxed from our nature bender in Parque Huerquehue so there’s only one thing to be done; meet up with team Poland and re-saturate on alcohol. So it’s off to Valparaiso, or ‘Valpo’, the well renowned party spot for Chileans and indeed anyone worth their salt on new years eve it seems. It’s party time combined with the anticipated reunion with team Poland, the question remains; what sort of cyclone defence systems does Valparaiso have in place because Ola and her backup band are on approach.

The overnight bus could be, and indeed has been a damn sight worse, we’re completely getting the hang of these jaunts smashing out six or seven hours sleep. That’s not to say we’re not a bit tired, the three days hiking straight onto a night bus are a cake mix from which only flavours of hate can emerge. We’re loaded up with packs and trudging step by step we soak up the sights sounds and indeed smells of Valparaiso. On first impression it’s safe to say that Valpo has edge, grit and more than its fair share of fading glamour. Passing grand buildings that have all seen better days mixed with a relentless array of street art there’s an abandonment to any pretence of pretty exactness. Flair, flavour and a hearty dose of fabulousness have won the day here and there’s no sign of them letting go any time soon.

Of course it’s sometime soon after 7am, who really knows, so this means that the very South American phenomenon of closing cafes when you most want coffee is in full swing. There’s a very real risk of middle-class first world tourist meltdown on the horizon. We’ve made it the ten or so blocks on the flat ground but our path to the hostel now draws us upward. We were hoping for a stop before making the climb; tantrum cannons at the ready. Sadly there’s no potential you-tube sensation style public embarrassment, the steep hills that Valparaiso clings to can’t be avoided or delayed it seems.

Dragging ourselves up a winding cobbled street flanked by street art covered buildings that pile ramshackle atop one another we escalate into alternative hipster heaven. Every bend in the road reveals more steep ascent and impossibly placed buildings; Valparaiso is a town reminiscent of a collection of building blocks all from different sets but shoved together anyway. The result is a wild deviation from the conformity, organisation and gentrification that often sets Chile apart from other Latin countries. The reputation for party time in Valpo is passively on show everywhere, the black sheep in Chile’s studious diligent family is cheeky, irreverent and romantically stylish in a manner that many will try to replicate and all will fail. Right now it seems all too easy to overlook the liberal smear of dirt and grime, it seems part of the city and something it could not do without.

Our invigorating first date with the irreverent personality of Valparaiso has not only been interesting, it’s ended any chance of tantrum. We now have coffee for our wait till check in time and the reunion with team alcohol/ Poland. After dropping bags and showering we are warned of the Valparaiso ghettos which even Chileans don’t go to after dark, another reinforcement to this cities deviation from Chiles reputed stability. Grabbing a small bus we wind along an art laden road clinging to the hillside before our rocketing little shitbox bus barrels down plummeting streets too windy to be considered safe. Disregarding regulation is a local pastime here it seems. Spat out at a market that is far too crammed for words we load up on bags full of food and settle in for a local meal soaking up a buzzing life that is as infectious as it is unavoidable. The paila and fish soup aren’t as top shelf as in Santiago but a steaming bowl of fresh local seafood cooked in traditional methods simply can’t go wrong. This place is going to be fun and exhausting, we just don’t know which will be more.

Arriving back to the long awaited reunion we launch into stories, laughs as the team gets back together. And they’ve multiplied, Paulina has joined team Poland so we’re outnumbered now, this could be dangerous. Not surprisingly a celebratory beer goes down well from a balcony overlooking this most fabulous of towns and it’s famous harbour. The love just keeps coming, Poitr has scored big points with the whole team booking an awesome apartment. A great little kitchen provides the platform for a home cooked fish curry, pisco sours and they type of homely evening that is so rarely on offer for nomadic travellers. 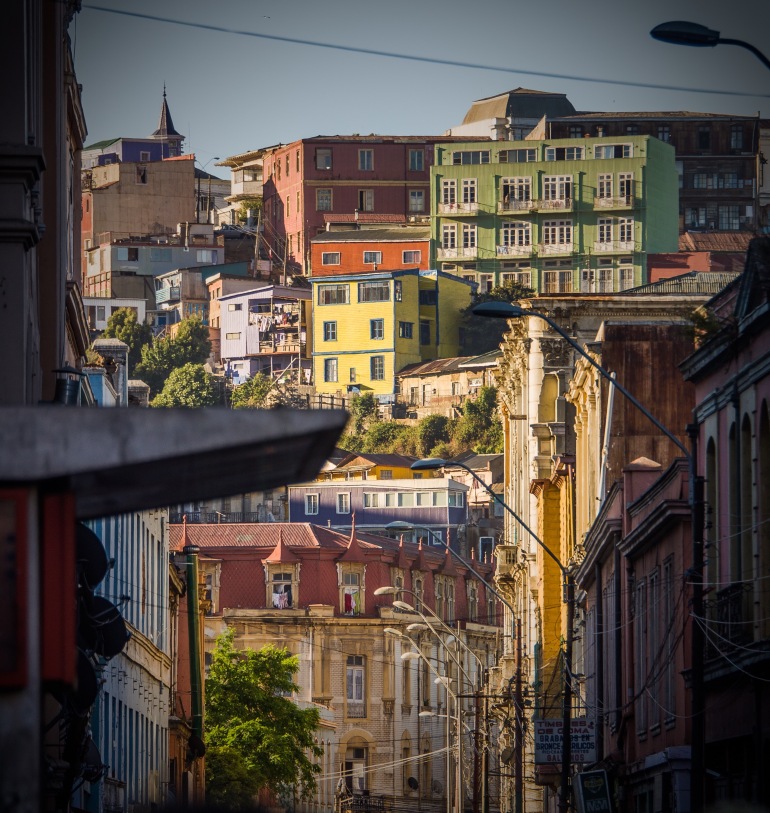 Valparaiso was once the richest and most important port on the west coast of South America until the Panama canal undermined it’s necessity. That status is on show for all to see but those glory days have been penned to a history long past and unlikely to return. Instead of slipping into simple disrepair Valpo has let loose an artistic explosion all too happy to let go of the trappings of riches in favour of a less tangible currency. Valparaiso you’re super cool, we want to be your friend.