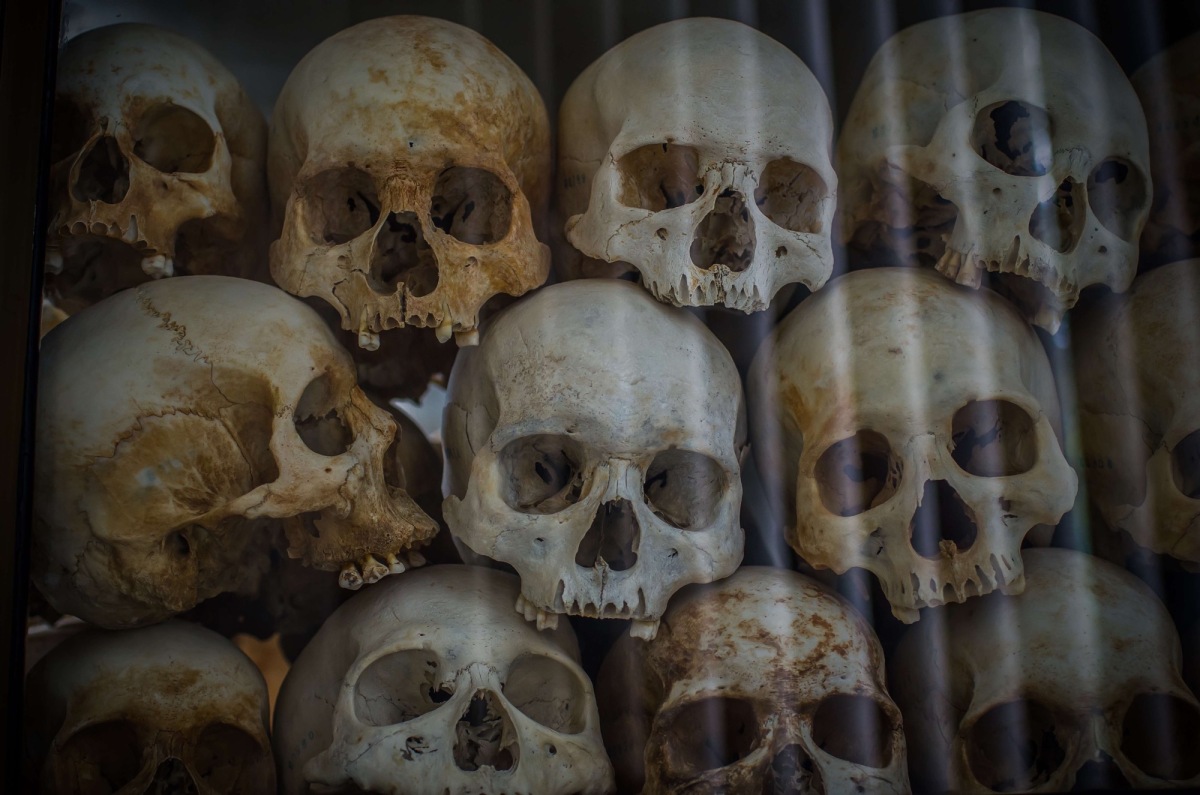 Yesterday was yesterday; gone, faded into the vague crossover of night and never to glimpse daylight again. But some days don’t surrender meekly, resign to be remembered as a watermarked number in a small square along with the 364 others. Yesterday the dividing line of a calendar day was bridged by stubborn thoughts; we saw the sights, had some beer, the sun sank and it rose again but the ritual of time compartmentalisation didn’t seem to work as usual. Yesterdays visit to S-21 was not so easily forgotten and in the other half of a day that claws beyond its bounds we’re at Choeung Ek, where the victims of S-21 came to become what our language hasn’t developed a word for yet; victim seems inadequate.

A set of headphones cocoon my ears to a world inside my skull, I have my thoughts that shout from yesterday and the accented voice of a man who’s words I step in rhythm to. There’s memories scratching at my recent mind: gored corpses strapped to small bed frames, men crying out through gritted teeth as another electric shock is administered to their testicles, women wailing incoherently from another scorpion bite while their breasts are mutilated. Children screaming because it’s the only option. The enclosed world of these headphones and the man who’s politeness now just seems clinical is too effective, the wrestle begins between seeing a tragedy that happened and running away from the feelings that place us in the middle of it. 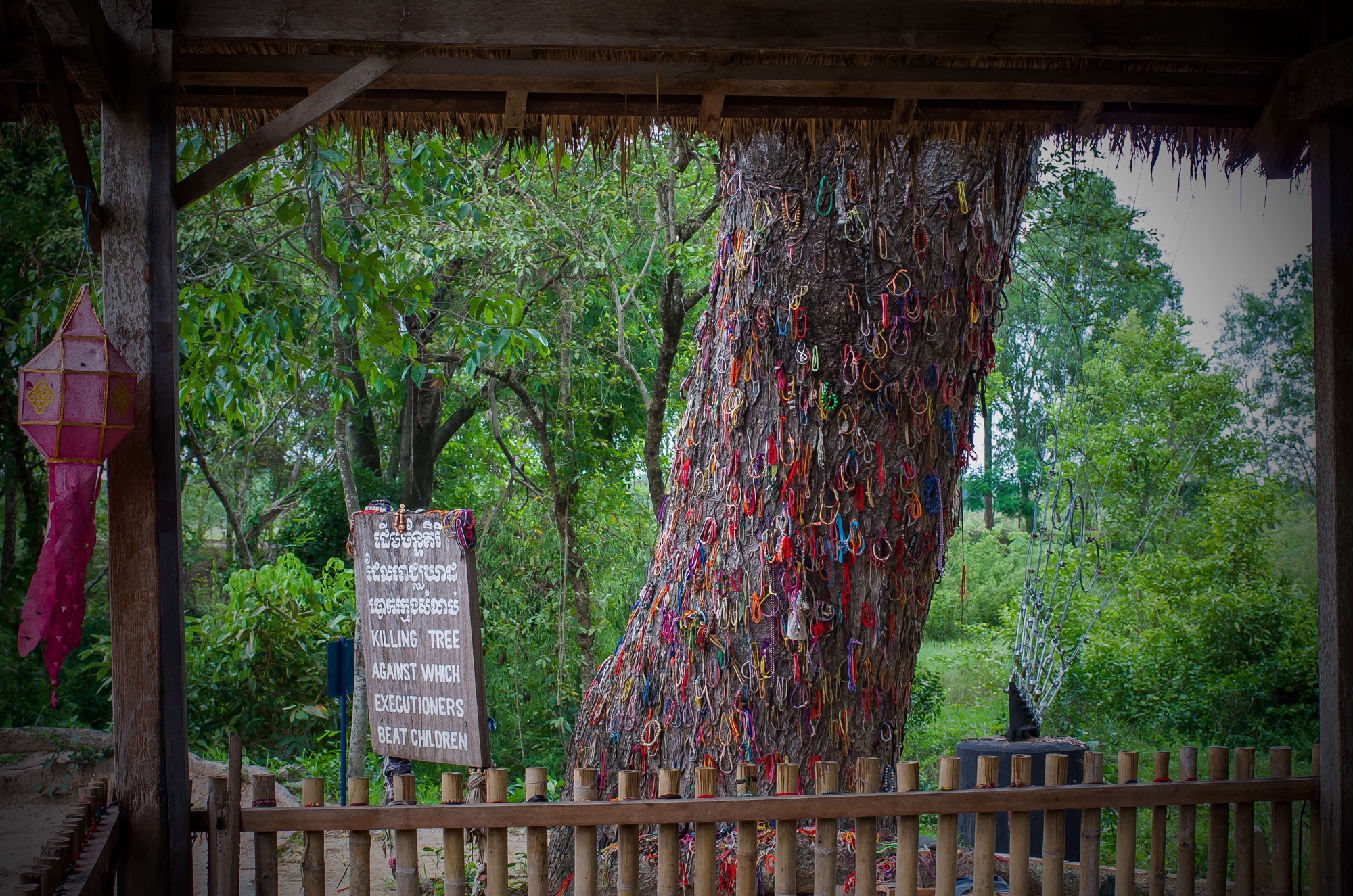 I’m not a victim here, neither is Charlie. He’s in his enclosed world, we touch base occasionally in a relieving escape from the headphones but our journeys are largely separate, alone; so fitting. There’s 2 million stories to the broader saga of the killing fields, Choeung Ek is just one of about 300 such sites in Cambodia where a quarter of a nation was thrown into mass graves, murdered with iron bars, hoes or machetes to save on valuable bullets. Around two million people form a sea of faces but as this polite man talks me so impassively through the horror, the face I see is Cheav’s, my colleague now safe in Australia but born in Battambang, Cambodia. Cheav would have been an infant at the time this place scripted its infamy and there is no doubt a story of his family but it’s not a topic easy to raise. Every one of the 20,000 people dumped in this area little bigger than a couple of football fields has a story and each one of them links itself inextricably to the face I know.

Once five or more metres deep, the depressions in the ground we see all around us are mere dents in the earth to mark where the mass graves were as time attempts to erase the past. The polite man talks to me still and I jumble between unbidden assaults of imagining what it is to be a victim here and placing the face I know to the stories I am hearing. Either option is horrific but in this cocooned world I have precious few choices as I dance from one wrenching immersion to another. 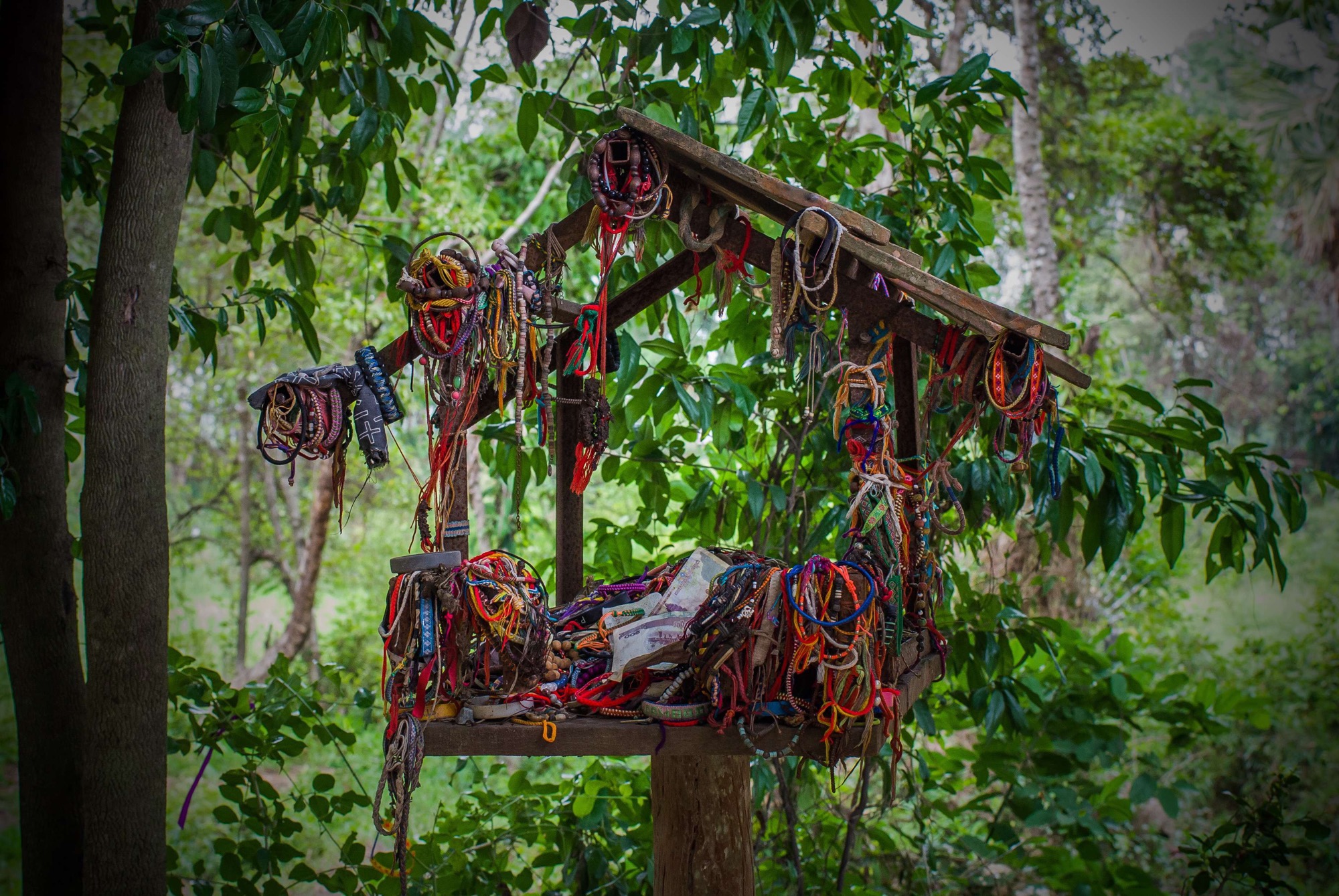 Horror for the deaths, outrage for the injustice, anger for the ignorance and woe, simple weeping helpless woe are the world of my earphones I can’t escape. Cheav keeps popping into my mind, his huge grin mocks the turmoil of my gut but that’s the only face of his I know, he’s always smiling just like this voice refuses to resign to sorrow. Where does fortitude like this come from? The fields are alive, I can feel it, the dead refuse to rest. Literally. On paths we walk the bones of victims crests the dust as the years wash away soil, unmistakable body parts lurch from the ground like the undead returned along with the scraps of tattered cloth they were buried with. 20,000 bodies in this place alone, the enormity of this disaster can’t be refined to just the graves we see or the shrines of exhumed bodies. The name is too apt, The Killing Fields, yes they’re whole fields, as if the graves aren’t horrific enough.

I’ve spent this whole time wanting to get out of this insular ear-phoned world but the first sign from outside of it offers only more suffocation, whether it’s woe in my own thoughts or those thoughts made real climbing from the ground all around me. This is all too much. These two days in one are too effective at being too much, only they push you further. The killing tree. The grave beside the tree is for mothers and their babies. Grabbed often by the feet the babies were swung in wide arcs to smash their heads against the tree which is now full of tributes, and dumped into the pit. Bullets were too valuable. Through the operating years of this place Cheav would have been between the ages of one and five. His smiling face mocks me, I want to turn away or run but all around me are just more graves with dead people still climbing to the surface in between the graves all these years later. Fittingly in this place there’s nowhere to run, only places to try not to cry. 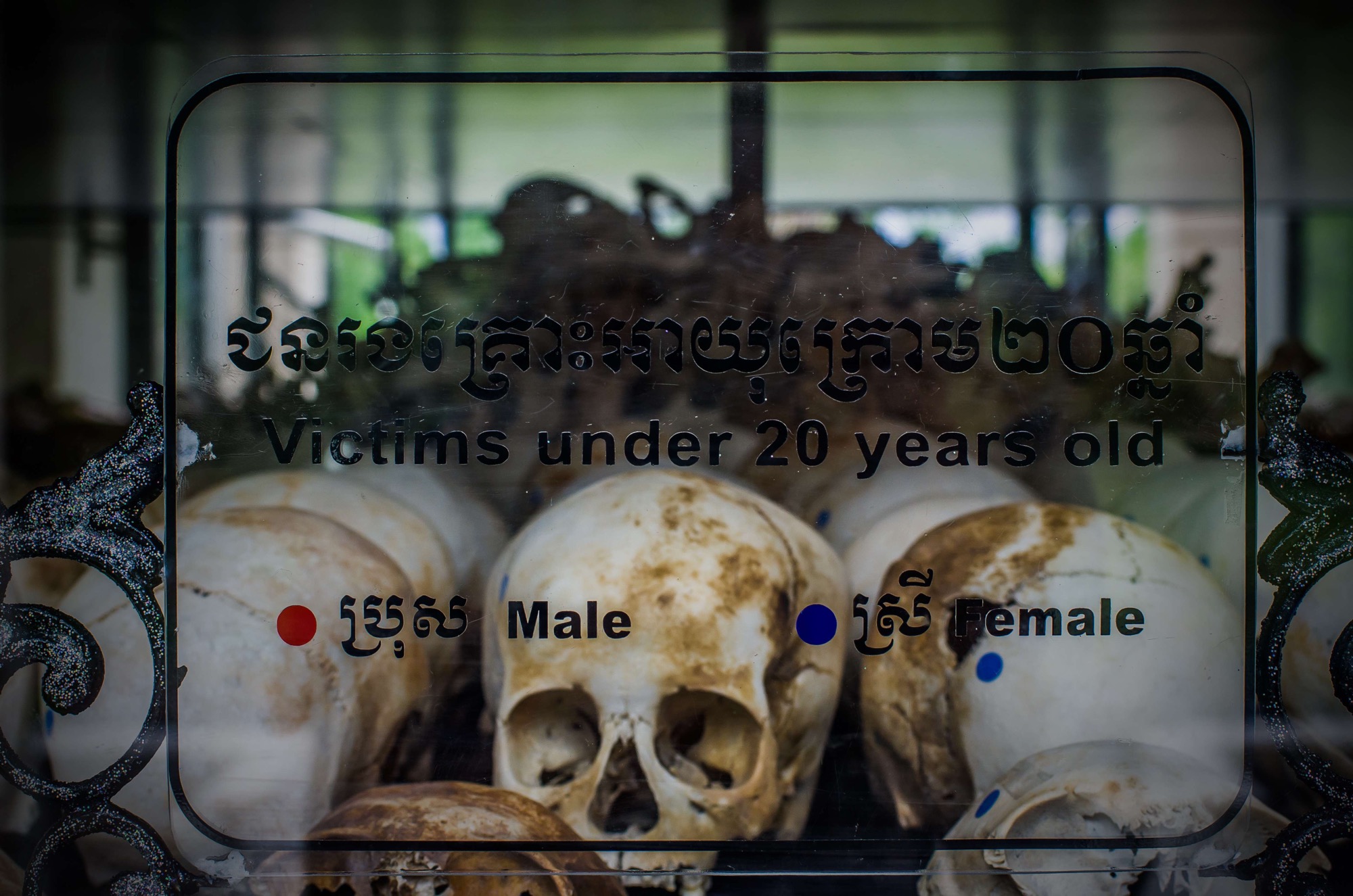 Victims sculls which have been classified by age, gender and cause of death. Choeung Ek (aka The Killing Fields), Phenom Phen, Cambodia

I know the earphones will come off soon, I know that I can just walk a short distance and be away from the world of the dead but this knowledge does little to help. There’s millions of stories all around me that queue up behind the one that I know, the one that luckily wasn’t but so easily could have been. So oddly a smiling face represents the millions to me that can’t smile anymore, so grotesquely discordant that it only feels appropriate. there’s a family in Australia, Cheav and Sam with their three kids that have the same smile, Lincoln even smiles when he’s whining about something. It’s crude to think, so blunt but if the wrong babies skull had its brain splashed to the world there’d be one less family and five less smiles in a world that right now can’t do with a single one less.

As the smiling face of Cheav is banished with great effort the queue of two million people take a step forward into my view. I can’t do this two million times; the Khmer Rouge obviously could. With relief we cast off the earphones and finally indulge in running away, the breeze rushes past us as the tuk-tuk speeds through the poorer parts of Phnom Penh and back to comfort. What a novelty, walking away from the killing fields, how people must have dreamed of such a thing when they were living the last moments of something we run from, unable to bare the mere thought of. We’ll see the sights, have a beer and the sun will go down and come up again as usual, this time we hope those unbidden thoughts can be put to rest unlike the dead of the killing fields.