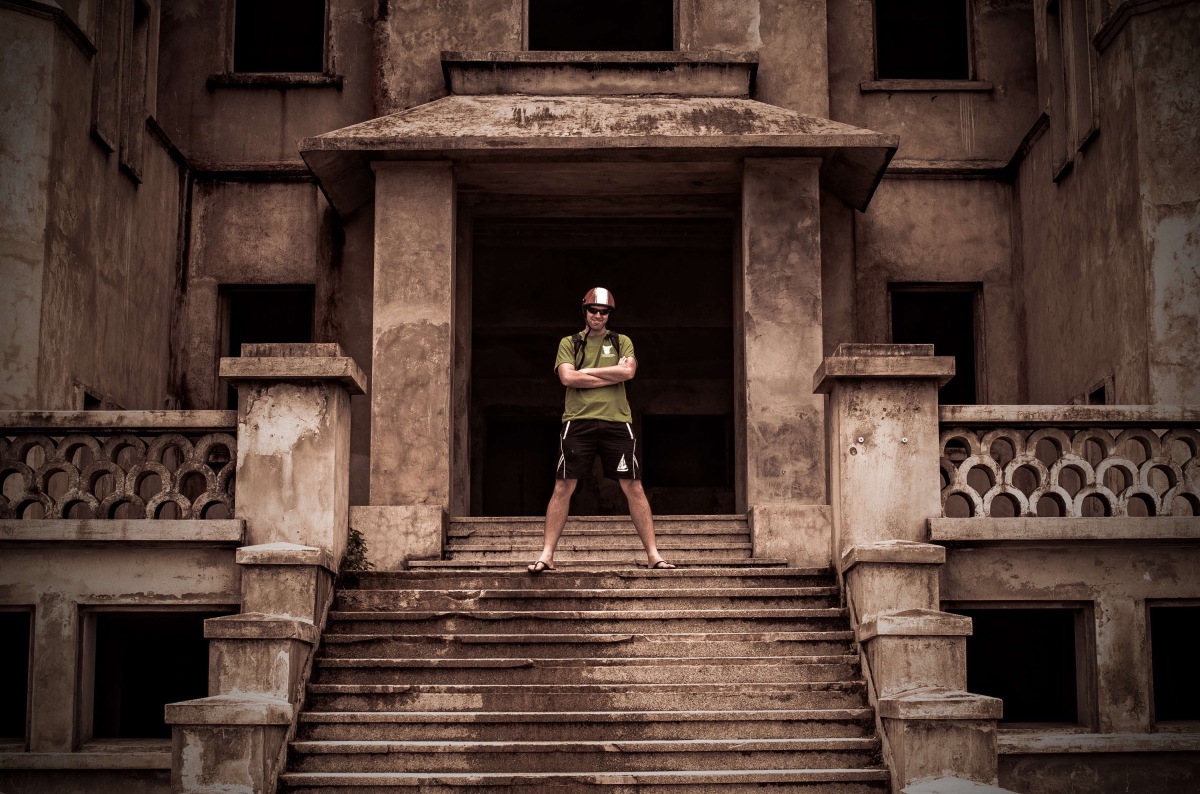 Upon entering Cambodia we reflected on the 1980 song ‘Holiday in Cambodia’, released just after the murderous regime of the Khmer Rouge crumbled it was a concise lash out at the whining comfortable middle classes. Instead of complaining about trivial problems that aren’t really problems at all, the song so elegantly said: what you need, my son, is a holiday in Cambodia. So outrageous it was, the suggestion of taking a holiday to war-torn Cambodia, so concise the cutting commentary; yet here we are taking the once outrageous words literally on our own holiday in Cambodia. It’s been 25 years and Cambodia is a very different country now, rendering the once provocative song neutered. That was the idea.

Unlike many nations who choose the easy option of a blind eye, Cambodia not only doesn’t shy away from its past, it tackles it with humility and honesty that’s sometimes more honest than you’re ready for. Rejecting the very human desire for hatred and revenge, Cambodia instead seeks justice and resolution with calm rationale never shying away from the difficulty of a shameful past. We planned on the 2015 version of the Cambodian holiday but at S-21 and Choeung Ek we got a sobering dose of the 1980 version after getting the 12th century version in Siem Reap. The past here is not easy to escape; what strength of resolve this nation gathers by facing its pain rather than choosing the blind eye. 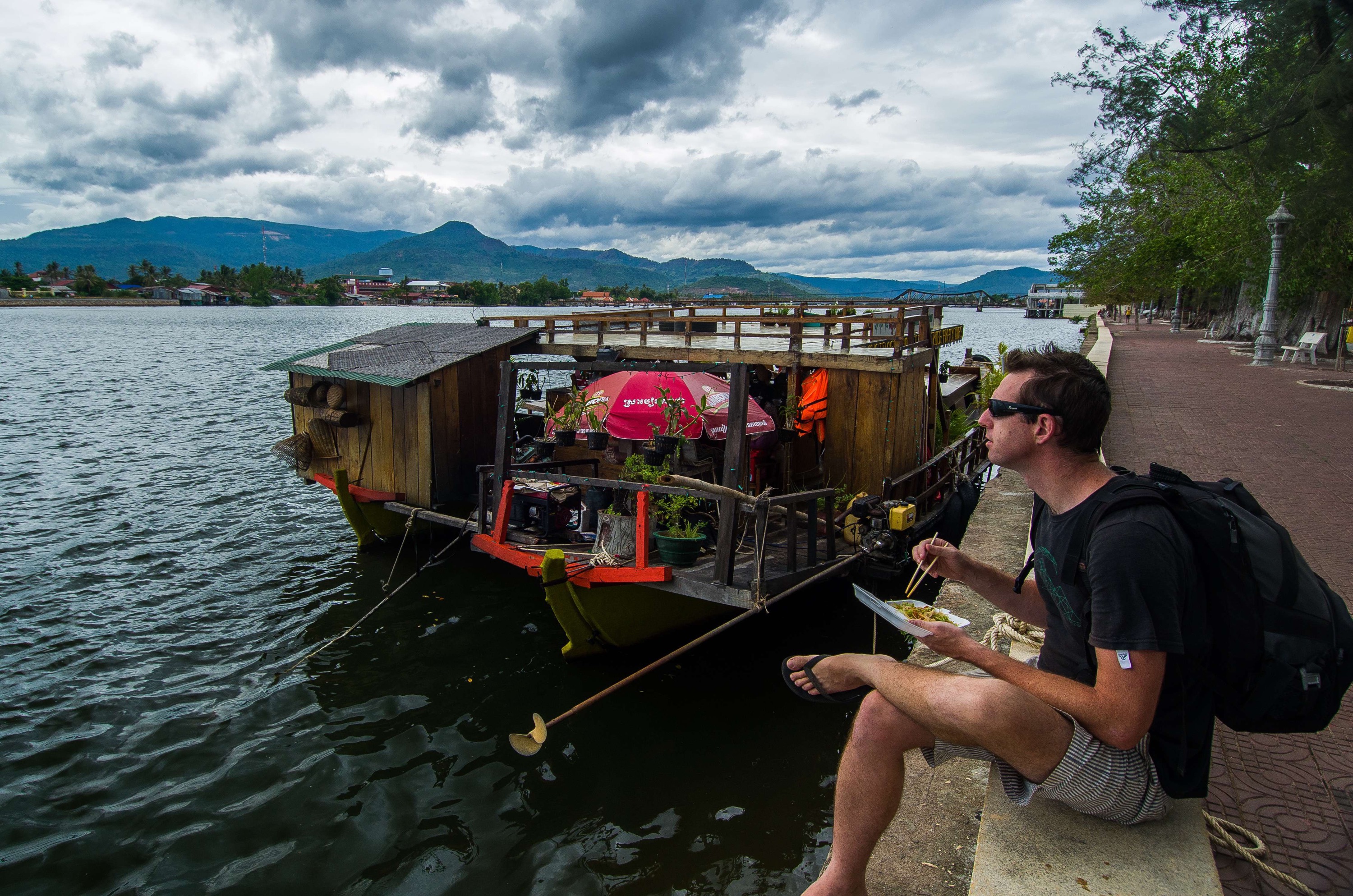 When we travelled in China the very counter concept was the confronting element to travel within; China’s own equally tragic atrocities are not only ignored, Mao is still largely adored. Comments abound in the guest books of S-21 prison about China’s involvement in supporting the Khmer Rouge as Cambodia denounces and faces up to the atrocities of Pol Pot yet China continues to ignore that their own disaster even happened. Contrary to the fantastic time we had, we were happy to leave China far behind but it’s insidious reach just keeps on calling back to us. Where all around us in Cambodia we see cheeky smiles, warm dispositions and courageous honesty China revealed a sad confirmation of it’s own bad cliches; the new money of China more obsessed with Louis Vuitton branding and designer cigarettes than bringing sight to the blinded eye. Yes, China still has a portrait of their Pol Pot looking over Tiananmen square.

As difficult as it is to resist outrage, times have indeed changed and thankfully Cambodia is a far different country to what it was in 1980, our original hopes of a present day holiday in Cambodia haven’t been dashed. Kampot is a small town of tatty shopfronts, broken footpaths, dated signage and gardens that need a bit of work. It’s also the definition of charming. Kids in gleaming white school shirts to match the big smiles, a relaxed vibe and great food sit beside the Kampot rivers eventual opening to the ocean. Known famously for Kampot pepper, this little town takes us the next step in our time travel journey; from ancient Angkor, through recent disaster of the Khmer Rouge we’re finally up to date, maybe this is what Cambodia is today. We like it. 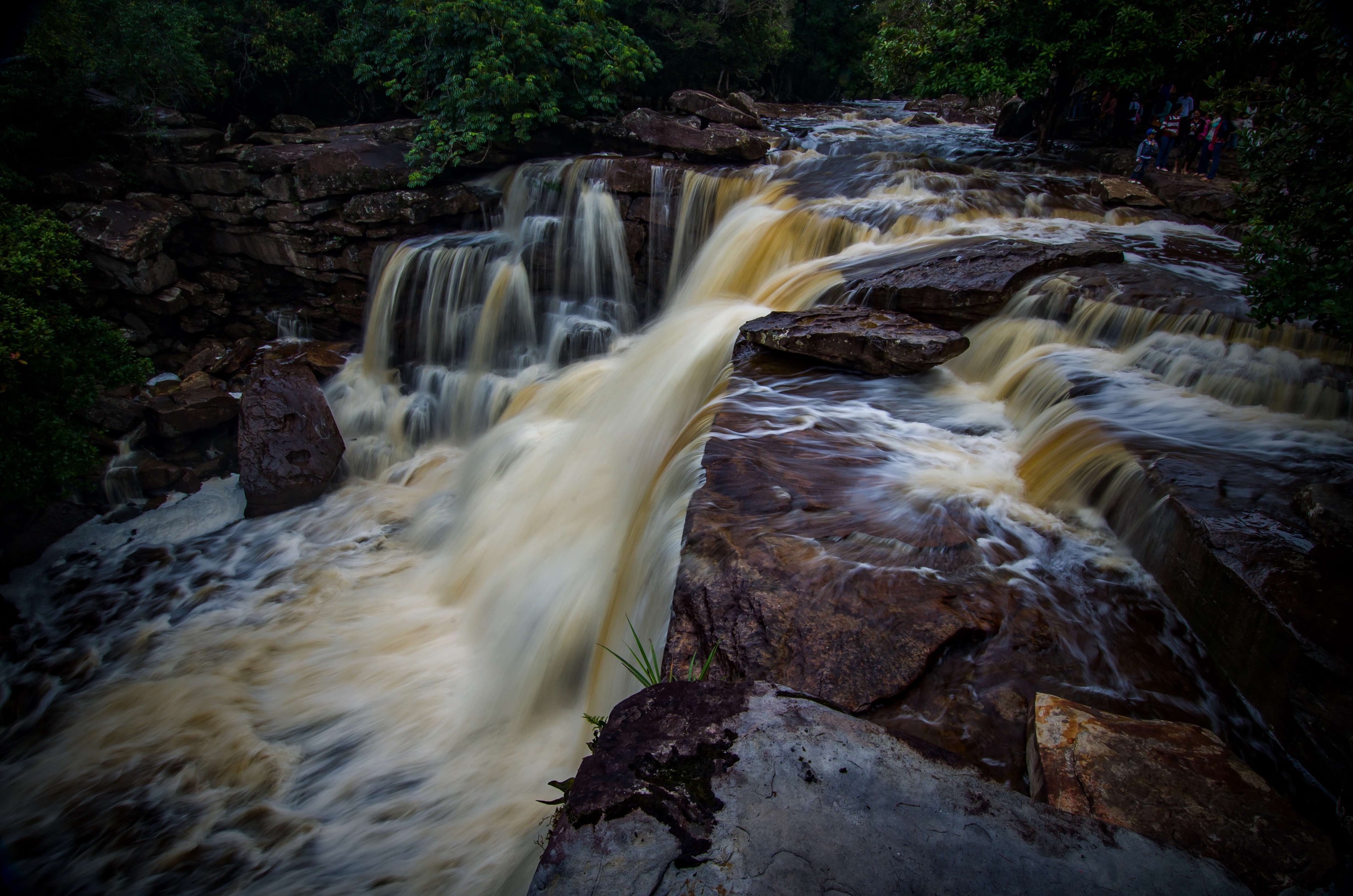 Blessedly freed from the emotional punch in the face that was the last two days it’s time to get some wind in the hair and hit the road, cast off the restraining shackles and finally make a liar of the song. Our throbbing 50cc scooters aren’t exactly the definition of masculinity but they do the job, in truth the absurdity of these little machines is a liberating triviality, a harmless bit of fun that the last two days didn’t permit. First challenge, Cambodian roads. There’s no road rules, just an overall ethic: we’re all in this together. There’s few conventions I can determine other than just let people go, you’ll get your turn and whatever you do, keep smiling. Signs and lights are nearly non existent, traffic flows like water currents joining from all angles. Elegantly this country solves the problem of using mobile phones while driving; at home we don’t do it because it’s the law, here you don’t because it wouldn’t be possible, you would die.

Reaching a top speed of zero on account of our disabled speedometers our scooters scream like overworked lawnmowers too early on a Sunday morning all the way up to nearby Bokor mountain. Across an escarpment that looks from the town of Kampot to Vietnam to the open ocean ahead we find grand buildings, casinos, resorts and churches placed so oddly up in this alpine escape. Grand buildings only as past imaginings, most of them are abandoned or deserted, open shells of a place that once was going to be. Life spills from some buildings to operate beyond a tourist musing but this otherwise idyllic location remains a ghost town calling forth stories of a future that was going to be from a past that never became a present that once was. Somehow travelling in Cambodia keeps shunting us to different times, the present just isn’t big enough to hold the massive stories of this small country. 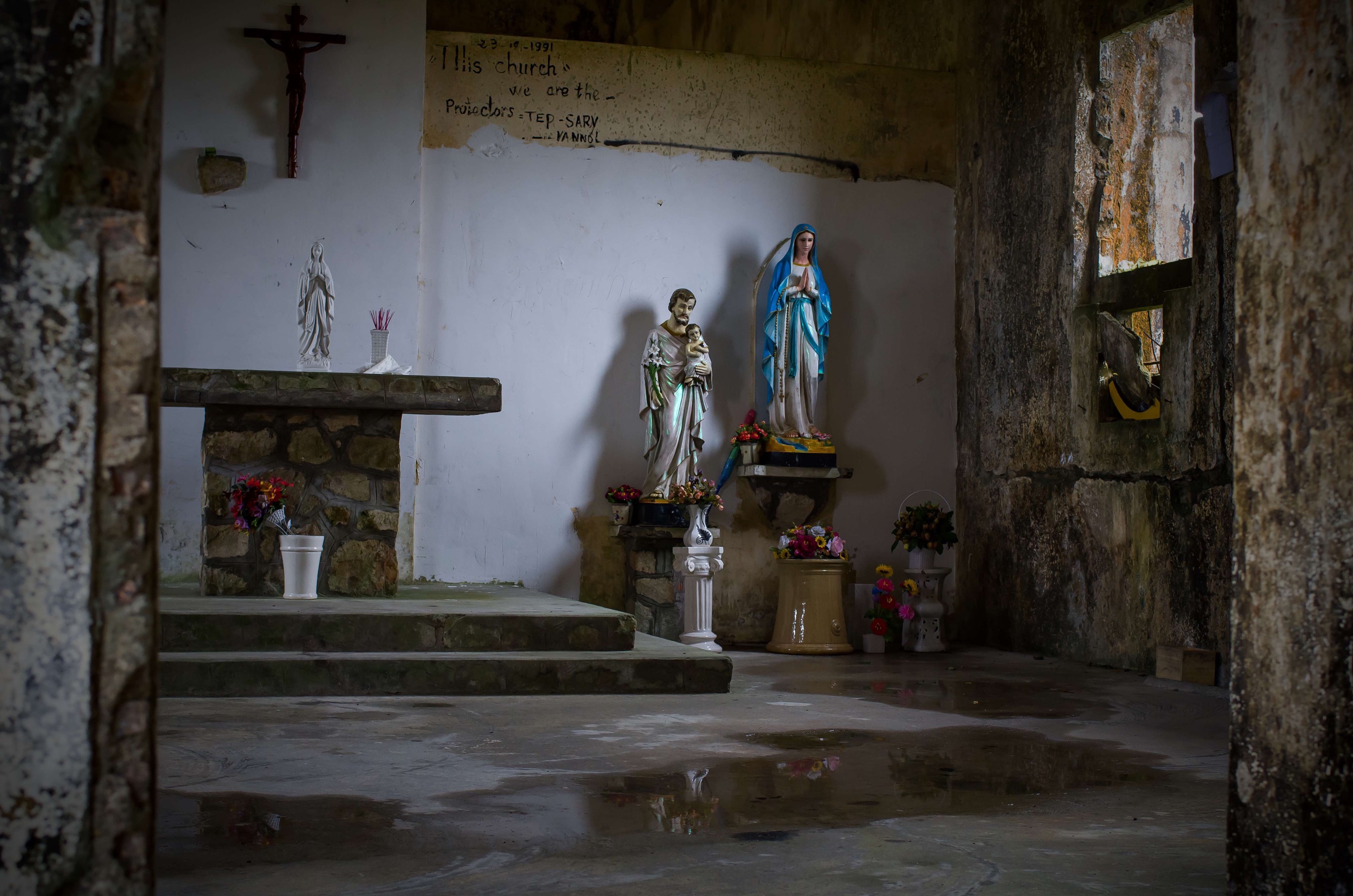 Inside the abandoned church on Bokor Mountain, Kampot, Cambodia

But cling to the present we do, the poor little scooters scream in protest on our way to Kep, another town on the coast. We’re getting familiar with the one road rule here and when it comes time to fill up on petrol we find ourselves at a tiny street-side stall disconnected from any other shopping venture, just a small cart on an arterial road. Petroleum regulations are endless and strict in Australia, it’s only as we scoot away that I ponder just how normal it feels to fill up from an old glass coke bottle for a dollar. We needed something, you buy it; so simple. The small scale retail ideal that we love in Australia but seems as likely to see the light of day as a Bokor mountain casino is anything but a hippie fantasy in Cambodia.

Small scale vendors are never more represented than in the food market. A papaya salad from one stall and a sugar cane juice from another has us sitting on the beach with a smiling world around us wishing the impossible wish that we could do this at an Aussie beach. In the place of fast food junk, Cambodia dispenses with the marketing, the packaging, the branding, the design, the logistics, the warehousing and the retail costs to cut the crap and give the consumer exactly what they want at the price they want and with the ethical story behind it all to boot. There’s a dense social commentary on consumerism here but with my tank full of ‘coca cola’, divine food and a blessedly under developed beach even musing about that concept seems corruptive. 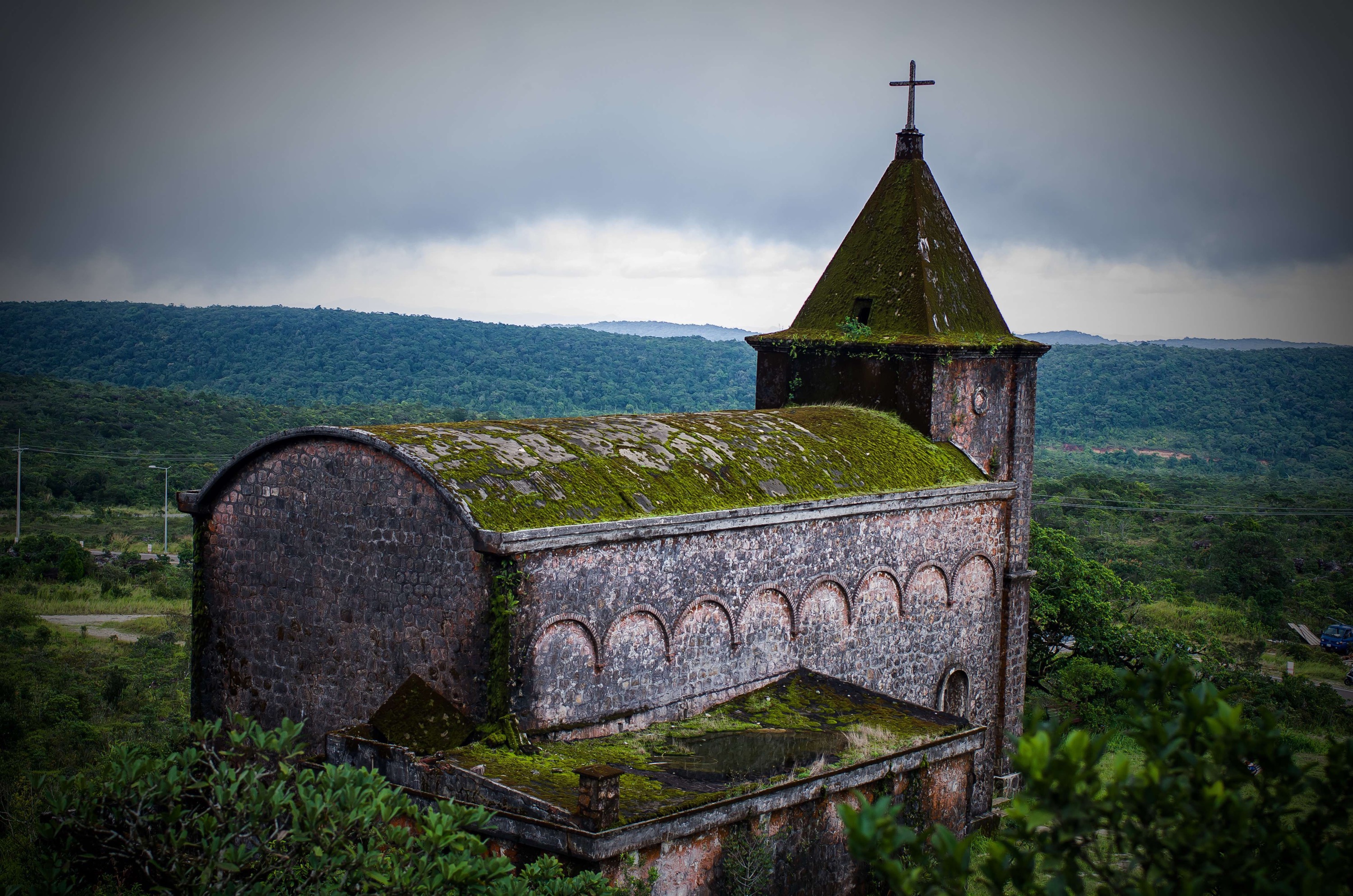 The mood is relaxed, carefree; far from tragedy and powerful grandeur. So relaxed it feels perfectly normal to have a beautiful young girl charge at us wanting a photo, she tells us excitedly “I like photo with foreigner, they’re my favourite food”. The lost in translation would be laugh-out-loud funny if it wasn’t so innocent, sincere and blessedly free of past severity. Life’s simple in modern Cambodia even though history, old and new, writes a more complicated tale. A salad, a street cart, a mis-quote and a beach; we’re finally having the version.2015 of a holiday in Cambodia.