We want you! In the 50’s we hadn’t all seen those words before, emblazoned over the image of the man in a top hat looking half applaudingly and half accusingly with a finger pointing off the poster right at you. Apparently he wants you. Red white and blue adorns the iconic backdrop as he calls you in and points you out, they want you but who are they and what do they want you for? Millions saw that poster and how many millions answered the call; how many knew what they were wanted for, how many just wanted to be wanted? Such a universally evocative image at the time and now still so for some; for others it ranges from simply conflicting to outright shameful.

The Vietnam war remains not only a potent historical marker for Vietnam but so much of the world, and although we’ve had eyes for little other than food, the war has pointed out at us just like that poster and demanded attention. War doesn’t want us and we don’t want the war but some topics are too culturally defining and potent to stay silent. Through the gates of the war remnants museum we are called in, as if the top hatted man’s accusing finger has singled us out: ignore me if your conscience can bare it. Helicopters, planes, tanks and guns litter the open paved area to greet us like junk for sale at a used car yard but with graver stories to tell than a regular Toyota Corolla that just keeps going.

The metal that once had such a purpose sits outside in the process of slow decay, their stories fading with time; inside the stories continue of people who’s bodies have faded into time even if their legacies linger, still so bold. Walls of photos adorn the lower level of a people who’s simple ways conquered the greatest military might the world had ever seen. Women and men all drawn to the task with hoe and wicker basket to repel the hoards drawn to a war of tanks and guns they didn’t understand by a poster they couldn’t resist. The used car lot outside seems such a mockery now, such technology poured into mountains of steel and menace undercut and left outside to rot by a population with few guns, many rudimentary tools and limitless resolve.

Resolve, bravery and willpower the Vietnamese had, they’d lived centuries fighting off occupation and invasion; but America had money and apathy to law and humanity, opposition beyond a political ideology. Vietnam is famous for being the war that was first published to the world; reporters and photographers into the fray en masse for the first time in modern history, Americas great strategic error that even their wealth and power couldn’t overcome. The world rose up, protests from people and governments alike built gradually as the juggernaut that now sits outside rotting met its second most deadly foe behind the Vietnamese: the PR machine of its own making. The Vietnam war was getting desperate and the world saw, for the first time, agent orange.

Possibly the only wartime act more insidious than land-mines and more horrific than an atomic bomb is chemical warfare. Dioxin, the key ingredient in agent orange, remains the most deadly material known to man, reportedly 80mg is enough to kill an entire city with a population of 8 million. Think about that for a second. America dropped 12 million gallons of agent orange onto Vietnam to eradicate the concealing foliage of the dense jungle that sheltered the Vietnamese. Chemical warfare, how we decry it and rightly so; dioxin was not even required as an ingredient for deforestation, its inclusion just made it destructive to people as well, making the choice to use it all the more unfaceable. Atrocity, genocide, crime; they all seem more appropriate words than war, war invokes at the very least a sense of fairness in battle. Did all those young men who flocked to a poster consider themselves criminals? Did they care?

To so many the Vietnam war is exemplified by the massively popular movie, Good Morning Vietnam; so witty, so funny. So insultingly wrong. Agent orange contaminated millions of hectares of farming land, polluted water supplies and lives on through genetic distortion from generation to generation; not a wartime tool, social engineering to make Hitler envious of its comprehensive reach. The horror is endless, photo upon photo of stoic yet malformed children look down up on us, but there’s no more powerful image than a still-born foetus suspended in formaldehyde. Powerful in part due to our inability to see clearly if the life that wasn’t was attempting to be born with just two heads or three, such was the genetic corruption. Before the light fluffy ending to Good Morning Vietnam, Robin Williams screamed the famous line in the face of the ‘betrayal’ of the Vietnamese boy he befriended for lying to him: “This does not look good on a resume”. With all respect to the late Robin Williams, his character exemplifies the apathy required for atrocity, the PR machine was up and running again.

Was the PR beast the silver haired white men in power? Surely, but the boys called to that poster have blood on their hands too. An accusation is inscribed onto a plaque in the museum, it’s accuracy was later confessed to by the perpetrator after reading US military ‘after action’ reports in court:

Lieutenant Robert Kerrey reached for hamlet 5, Thranh Phong village and cut 66yo Bui Van Vat and 62yo Luu Thi Canh’s throats and pulled their three grandchildren out from their hiding place in a drain and killed two, disemboweled one. Then the rangers moved to dug-outs of other families, shot dead 15 civilians including three pregnant women, disemboweled one girl. The only survivor was a twelve year old girl Bui Thi Luom who suffered a foot injury.

It was not until April 2001 that this accusation was validated by confession. In 1988 he was not a war criminal, he was elected as an American Senator. His Wikipedia profile’s paragraph of his bronze star medal of honour notes specifically the raid on Thrang Phong. The official military citation reads: ‘conspicuous gallantry and intrepidity and the risk of his life above and beyond the call of duty…’. Those pregnant women and children cowering in a dug out surely posed the greatest homeland security threat of the modern era hey Bob? Bob Kerrey was still running for his seat in 2012.

We in Australia can’t cry outrage either, nor can Canada, Taiwan, Thailand, Philippines, New Zealand or South Korea; America was far and away the main protagonist but we were all involved. On searching Google for facts on the Vietnam war my third ranked search was a CNN ‘five things you didn’t know about the Vietnam war’, just what I was after; data. Did you know that US soldiers were forced to sit in 48 degree swamps? Horrific for its deluded apathy; vomit inducing chemical war garners commentary about the poor boys who weren’t close enough to air-conditioning. Pin drops can be so deafening. The layers of desperation and horror in this museum match the shaking fit that threatens to consume me just like at the Killing Fields in Cambodia. Robin Williams character got it dead right; America, this does not look good on a resume. 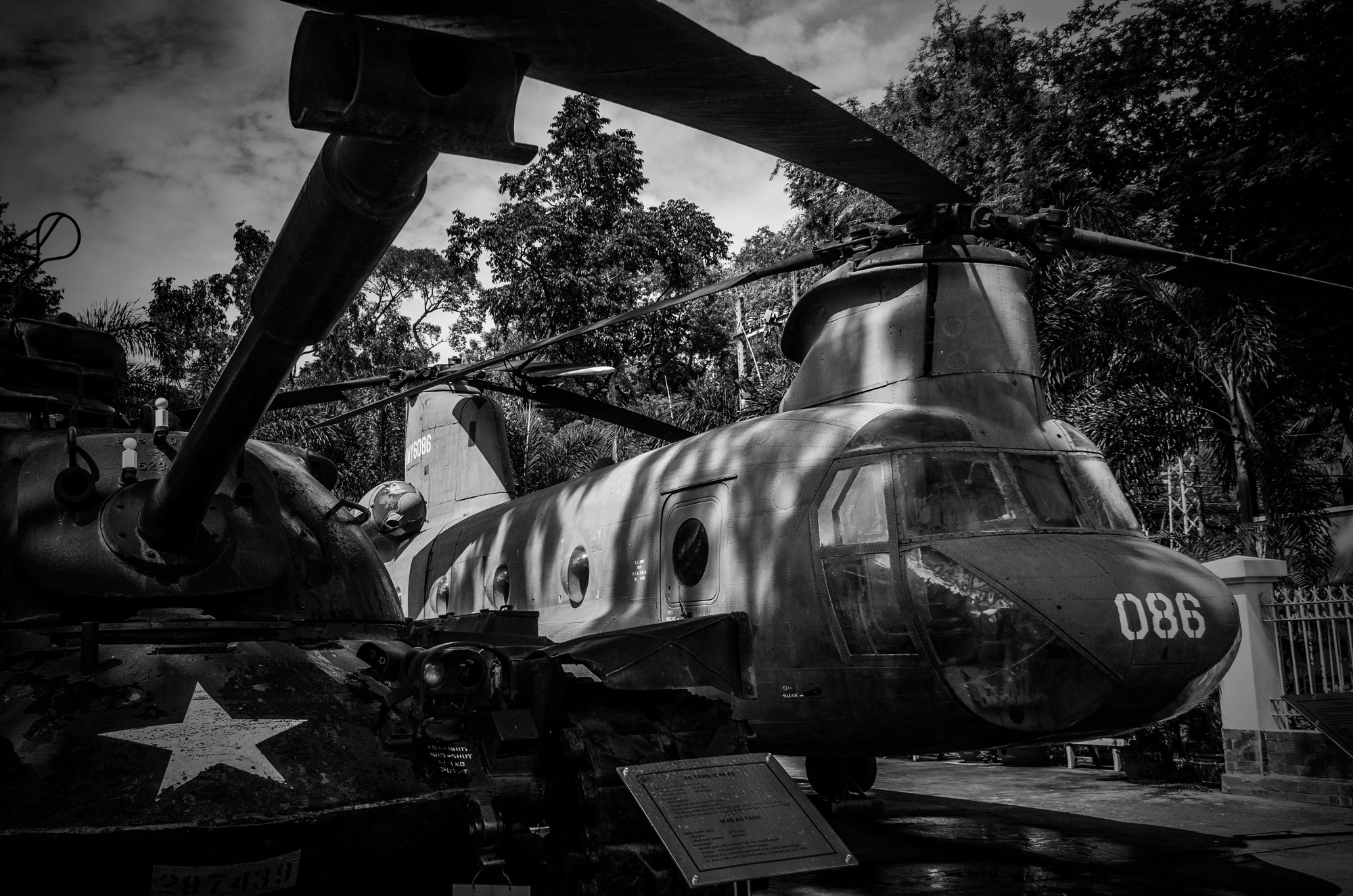 So the PR machine turned on the government that created it, America’s own media broadcasted back to the USA horrific picture after shameful story after unbelievable breach of humanity. The greatest military power the world had ever seen was defeated by shovels, hoes, sharpened bamboo sticks along with a scant few guns. But the real victory was earned on the irrepressible resolve of a people that have fought off powers for centuries and, on the cusp of claiming true autonomous unity, were not to be denied. The war is now over but the wartime resolve persists; vitality and ingenuity is no longer wasted on killing and surviving, it’s turned to making better lives, simple tasks like keeping an alleyway clean, making fantastic food and working an honest job aren’t taken for granted.

The story is a balanced debate in one respect, is the greatest discussion about Vietnamese resolve or American belligerence to law and life? Of course the muddy waters of war are complicated and seeking a neat conclusion seems delusionally naive. Interestingly for me the mistake of allowing the press into a war-zone has never been repeated. How many ‘Vietnams’ have come since that we know little about? How many are going on right now?