There’s plenty of different modes of travel in the world and on this trip we’ve had a good crack at sampling every possibly one of them, including the all time romantic favourite, the road trip. We reminisce of the three week mud dash that was Botswana; fending off Hyenas, cowering in the tent from Elephants and poised to dash from Hippos in the campsite. Fond memories permeate that time, not so much the getting bogged part but for better or for worse, they’re memories for life. For now we’re kicking tyres again, play acting at stern faces and uncertainty in an industrial carpark in Ho Chi Minh on the verge of adding another road trip to the list of this adventure. Argentina, South Africa, Botswana and China have all written chapters into our love affair with the road and that illustrious list is about to have a new stanza, Vietnam.

Gone is the fully fitted car from Botswana, the glamorous estancia in Argentina, posh wine regions of South Africa and the support crew of cycling in China; the Vietnam edition is just two boys, two bikes and UN relief team quantities of sunscreen. Our bikes to be have indeed seen better days, parts replaced so many times that no trace of an original bike remains; they wobble, stall, struggle to start again and all the while fart and splutter a constant objection to being forced from a retirement well overdue. With vague maps and GPS that works only sometimes we’re planning to set off into the world of Vietnam in the most blind way we can; think Top Gear meets Bear Grylls but without the support crew; or licences. Charlie’s bike has a warranty that lasts for one day while mine has none at all. What could possibly go wrong?

We hand over the cash and we’re away, the nightmare that is Ho Chi Minh traffic is our first hurdle; well it will be as soon as we turn back and get my bike fixed. We did get a wobbly 15 minutes which I’m declaring as a resounding victory. Take two, and at this stage it’s time to placate mums at home; we have proper helmets and our yet to be named nags have the speed of a ride on lawnmower. Laughing at logic with throttle in hand we take the cautious few steps into our new life, till death do us part. I wonder again, what could possibly go wrong?

Somehow we make it back to the hostel through the traffic blender that is Ho Chi Minh City filled with the emancipation of twelve year olds with a bedroom of our own for the very first time. Full of freedom we immediately take on the other task of chaining ourselves further to the mast of a trap we can’t free ourselves from. The best baguettes in Saigon are dished up by a mysterious character hidden behind a mask and nestled in a discrete dark alley, the Dark Heron. Like junkies we walk entranced the couple of blocks back to get our fix that we say will be the last time but we know that as long as it’s close we’ll never be free from it.

I queue up in the orderly fashion like the rest of the dependants feigning patience, imitating restraint and resisting the nervous shaking. For now the almost child-like freedom of being able to hit the open road seems to have inverted itself into a conflict, we’ll only be taking ourselves away from the Dark Heron and her poison we crave. Again the customary accusing look at me in this place that a white face doesn’t belong; this time I hold up two fingers instead of one. In a flash the bounty is mine, I scurry back to Charlie and in the shattering of a bread crust the world is right again, the cloud of withdrawal parts to clear skies. We can leave this behind, the open road beckons and we will own it; in sickness and in health we say to our bikes, ‘we do’. Filled with the optimism of a narcotic hit we’re ready to launch into the country and seek out the inferior versions of the Dark Herons poison: what could possibly go wrong?

By the second we pull ourselves free of this city that has felt uncannily comfortable far too quickly, a final walk down what we’re calling ‘cafe street’ seems a fitting farewell. Lined with countless Viet cafe’s it’s a bustling street but it’s not for coffee that we go, we’ve spied a street stall at the mouth of an odd lane full of dilapidated buildings alongside trendy bars crammed with too many scooters. The quintessential Ho Chi Minh location to farewell the city before we fly away. Beer tastes better when it’s in a place you’ve found, Anna the owner of the bar is chatty and for just a minute, five days in, we nearly feel like we belong in this city, white faces and all. The noodle soup outside is rich, warm and typically delicious even if we get the disoriented locals welcome for tourists that dare stray from the corral, either we’re lost, stupid or a bit weird she thinks. 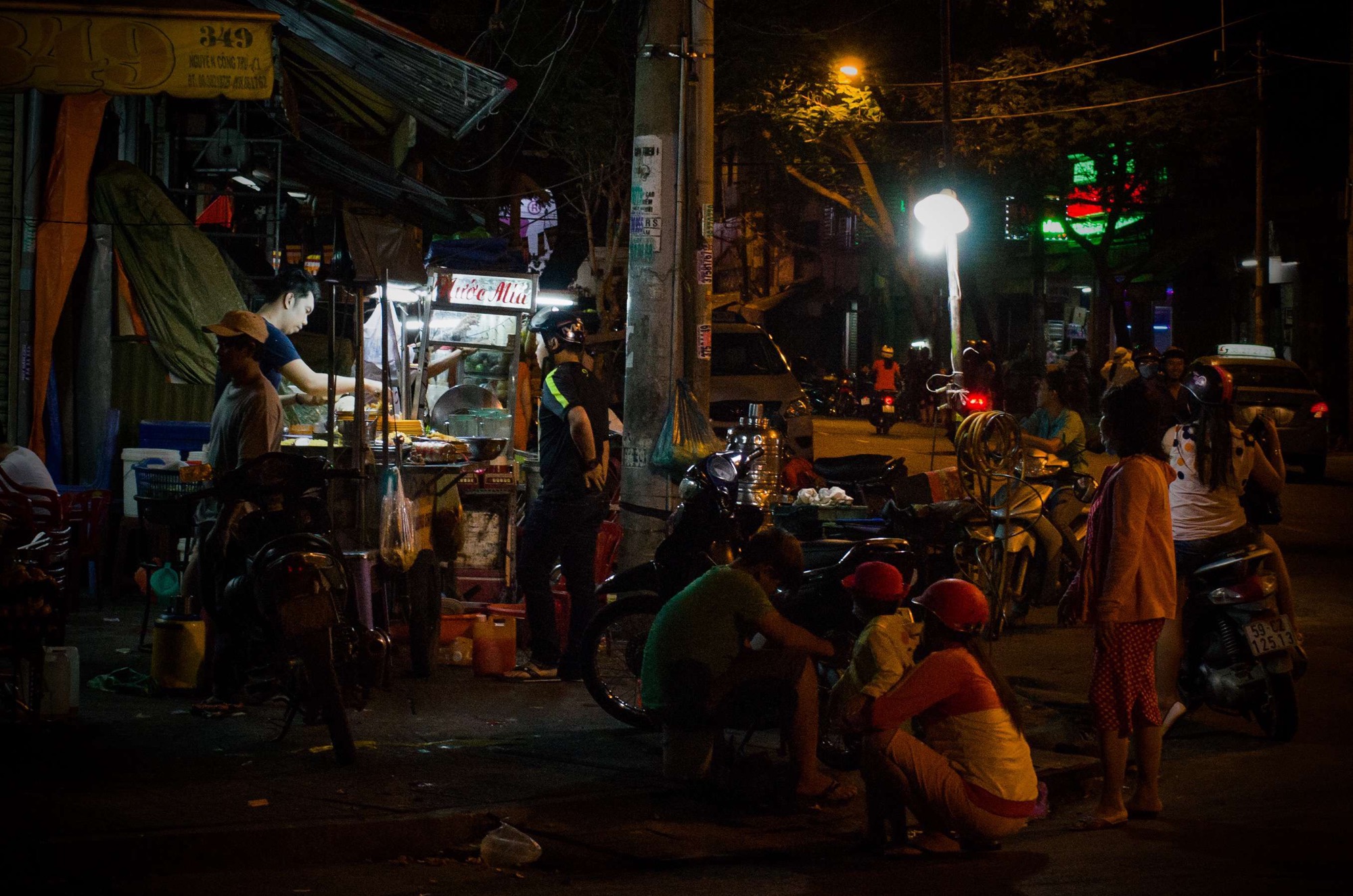 We pack bags with excitement and trepidation, we are launching into a great unknown in a year defined by launching into unknowns. If Ho Chi Minh is Vietnams version of a big shiny city and the traffic is more like a migration of wildebeest I wonder silently what the rest of the country is like. Our two new husbands in this polygamous mess are about to leave this world at any minute and yet tomorrow we will mount them to set off into the sunset of new lives together, the new Modern Family. Like the eve of a devout christian honeymoon we’re nervous, excited and entirely with no idea what to expect or do but we plunge with blond bravado into commitment far too grand for our inexperience. What could possibly go wrong?