After the stern talking to yesterday Greg is finally behaving like a man befitting my substantial repute and Rob has continued his good form from the lovers tiff just out of Mui Ne. I don’t want to jinx the good fortune but just possibly there’s to be four of us all getting along again as we carve our way down the mountains to Nha Trang; to beach, scuba diving and a return to heat from the blessedly cool Dalat. The food fest that was Dalat is consigned to history as we journey from town and into the country, again skirting the rugged mountain slopes into wide arcs and clipped corners. It’s like taking a couple of donkeys onto a racecourse and riding high in the saddle, Rob and Greg aren’t the finest of machines to be honest but we all conspire to keep the ruse alive.

It might be impossible to repeat the glut-athon of Dalat on the road but there’s no reason to turn our back on food snobbery, there’s never a reason for that; particularly in Vietnam. First stop is coffee and as is the ritual now we stop at someones house who has plonked a sign out the front to take up the comically undersized stools, adult sized seating just wouldn’t seem right. Coffee is the liquid equivalent of skydiving, Rob and Greg are cooling down but we’re afforded no such slow down. On a concrete patio in someones front yard a fire burns some rubbish just near to us and a busy ladies lounge room open to the world, yet again the humblest of settings seems to be the discordant key ingredient to decadence and indulgence. Where in every other country we’ve visited small local places have a charm and authenticity that can’t be contrived, it’s a purely Viet phenomenon that the food is unquestionably superior in a weird resources to outcome contradiction.

The other phenomenon that is truly Viet is the one offering model, she does coffee, coffee and coffee, baguettes are a bit further down the road. Back on Rob and Greg we roll down the hill but the busy place seems to be the pho place; baguettes another time it seems. The broken record skips track again: delicious, authentic, local and all that guff, the assumption of deliciousness is becoming somewhat mundane. What’s not mundane in this travel day come food tour is the guy in the restaurant that wants to get on the drink at lunchtime as we’re offered a full cup of what can only be called moonshine. Viet coffee all of a sudden feels like a watered down milkshake.

The warm hearty beef pho acts as a counterbalance to our newest mate who won’t take no for an answer. Sensing our trepidation he brings over three shot glasses and pours it out and calls ‘YO’, and downs his shot. It would be rude to refuse. Oh look at that, the glasses are full again. Few words are spoken and even fewer are caught before they depart this world without finding a life in ears that understand them; so much is said on so few words that live another moment. Strangely enough we do say and hear more than the words that are kept for another time; this man is generous, this man is kind and warm of heart. This mans son is shy but inquisitive of the people from a world that seems so much bigger than his, this mans wife is the fortitude of this family unit and this mans friend is a content soul happy to watch this conversation unfold. This mans home looks like a cleaner version of a roadside mechanic and there’s not enough storage space to house the love and family unity that tints the air which smells of pho, the dusty ceiling or the clean swept floor. On so few words given life we understand so much, we learn so much. There is one word we understand though, yo, and voila, the glasses are full again. 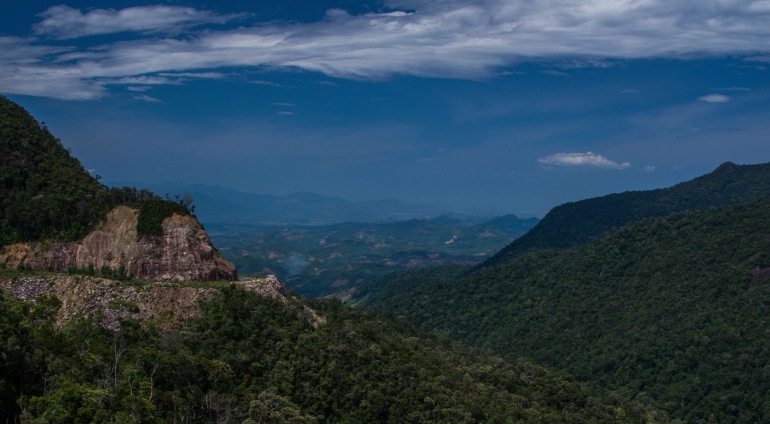 On leaving I’m surprised to learn that there’s no intention of billing us for the moonshine, nor for the tea that he insists on sharing. For some conversations there’s no need for a lot of words if you can hear with something other than ears. After Viet coffee and moonshine it’s not a great surprise that my heart is fluttering a little but a part of the flutter is undoubtedly the conversation of uncountable dead words not so dead after all, so few living words were born on breath. This mans missing canine tooth greets us behind a smile of generosity and humanity in place of calculation and conceit. His son sits close yet cautiously out of easy eye line, entranced by the temporary visitors from a bigger world that won’t stay long; they never do, says the excitement that masks the disappointment he fights off for as long as he can.

It’s a little sad, the conversation of dead words sticks to us too thickly as we wave a fond farewell to disappear to our big worlds never to return and battle a child’s disappointment. And it clings, all the way down from the beautiful mountains and onto the hot plains leading up to Nha Trang. Intent on soaking up the food journey that has become so much more than just food we can’t help but take up one more opportunity, one more privilege to stop at a small roadside place. We invent a need for coffee. Many words live another day on ears that give them homes this time, a man speaking great English goes about his business in the typically attentive and industrious Viet way. Before too long we’re farewelling this man also and onto Nha Trang. 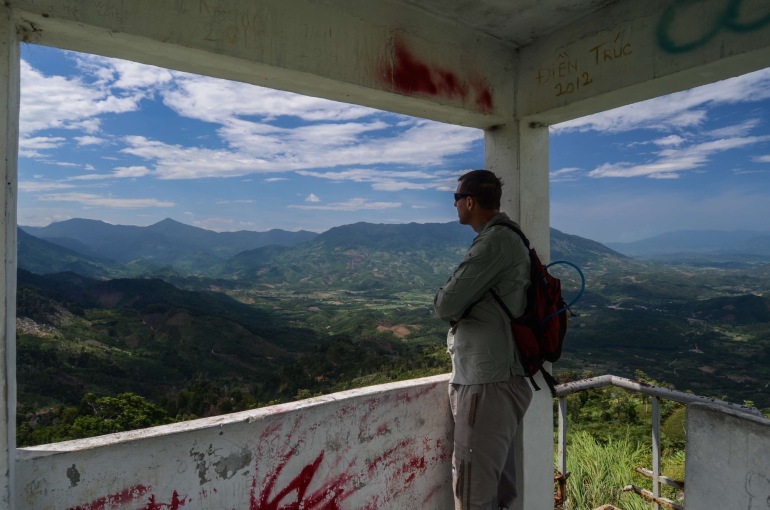 At a food stall in town now we take in some sort of rice dish topped with sausage, pork I think, dried fish and god knows what other special secrets before shuffling one stand left to indulge in a Nha Trang specialty, pancakes. We’re stuffed to bursting on a day that should by all rights have been a travel day, but it wasn’t. It wasn’t really even about the great scenery, it’s even more than the food. Today we didn’t just taste Vietnam, we didn’t just see Vietnam, we heard it. We heard the dead words that found no ears in which to call home but cling to us still. We know so much more about that man and his family and none of it exists on living words, just the ones we thought were dead.