The morning of the rising sun, our first Japanese dawn; I had to use that cliche just once. In truth there’s little romantic glory about this almost hangover fatigue that welcomes us to our tiny apartment that’s a little too hot, but who cares, we’re in Japan where beauty is an asset of even the ugliest thing. Toilet time is a negotiating process, there’s more buttons on this thing than the average TV remote and it’s a little intimidating I admit; I can lean over a cliff or wade through a cesspit Chinese squat job but give me high tech buttons and I just about shit myself, literally. I did find the flush so I’m about as content as an old fuddy finding the on/ off button on the flash new flatscreen and just watching one channel, the ABC of course.

A morning of sight seeing with Ken and Aki, our Japanese mates from Australia, begins with a trip to get our rail tickets sorted before breakfast noodles see us into the day with Japanese efficiency. Noodles for us have become a tradition of finding a tiny plastic chair and sitting on that space that’s somewhere between road and footpath shared by scooters, pedestrians, bikes, food sellers and whoever else feels like joining in. Not in Japan. We’re stopped at the door to negotiate the maitre’d, a vending machine no less. We smash a few buttons, pick our food, the coins come back out; lets have another try. Have we been out of the developed world that long? Eventually tickets spit out and we make our way into a perfect capsule of neatness to hand over our tickets and sit down to our noodles in a flash. Somewhere between sweet, sour and salty but not really any one in particular, the broth holds our noodles, beef, egg and seaweed in a light start to the morning that has us reaching for identifiable flavours and substance and finding nothing but a gentle satisfaction we can’t quite pinpoint.

The streets of Sapporo, lined with dated architecture.

Pouring rain has us bunkering down in town but really all thoughts are to tonight, the beginning of the festival, my festival; that’s right it’s my birthday and this means a flash dinner. The university botanic gardens are an interest to these wannabe gardeners and the market lunch is delicious but the shadow of food looms large; we’re soaking up the sights but all we really want to do is soak up some food. Some more food. Charlie has cleverly outsourced my birthday tradition to Aki in a show of dubious romance and even he doesn’t know where we’re going, adding mystery to interest. We part ways with team Japan for an afternoon nap. The moment is nearly upon us.

In the Sapporo version of a red light district that feels more like a shopping mall we wander perfectly clean streets looking for our restaurant. We do a fair bit of wandering, even Aki and Ken can’t find this bloody place, what chance would we have had? Aki disappears, Ken is lost, we’re amused and all together this is going really well, we’re standing on a strange street gutter laughing to ourselves at the luck of having team Japan with us. Eventually Aki emerges from a small laneway and we’re on, it seems that directions are not always so simple in Japan; like operating a toilet. 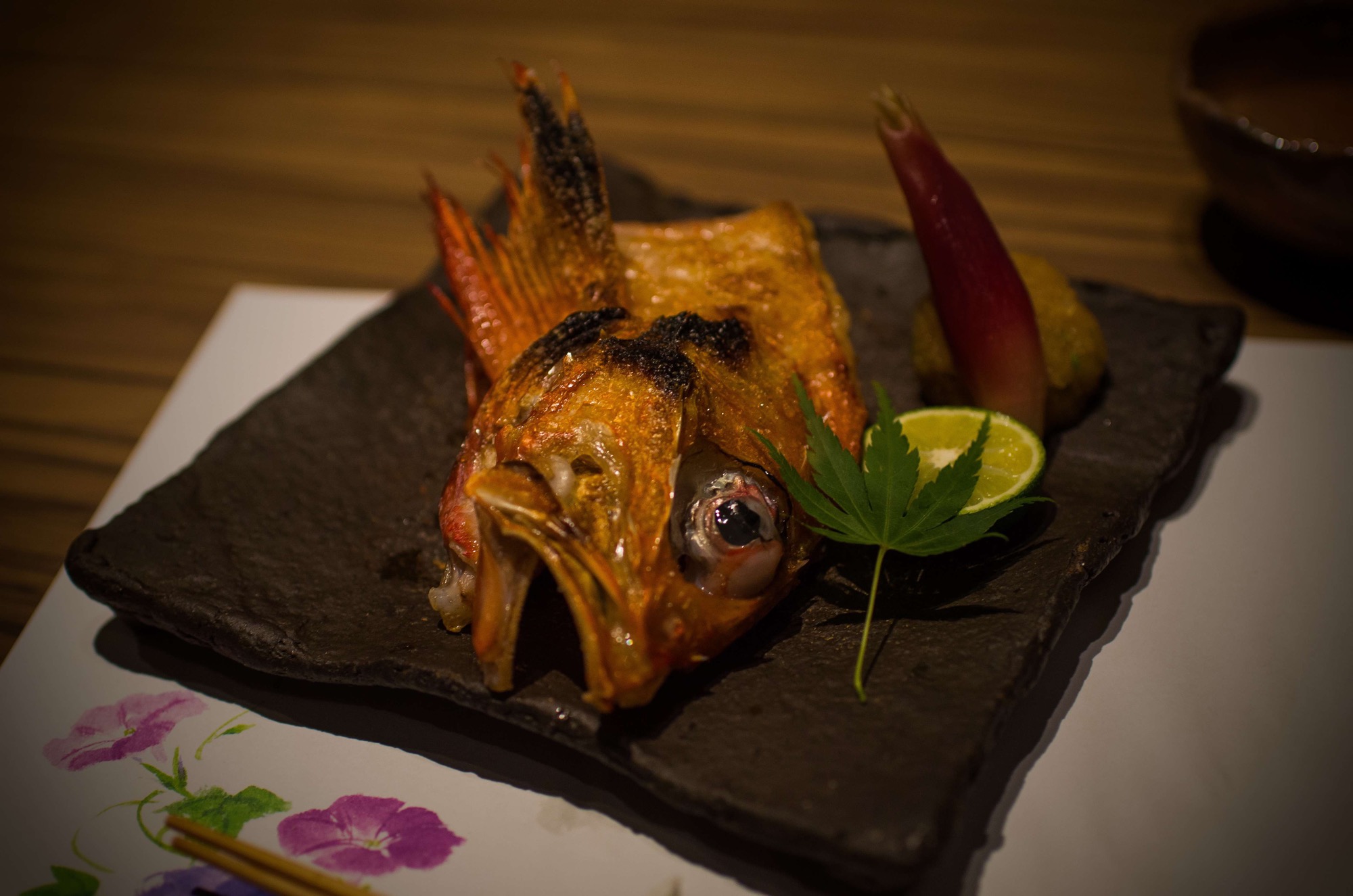 The most expensive fish to be found in Hokkaido, Japan.

Through the short three panel curtain that covers just the top of the door we emerge past the discrete facade into a minimalist wonderland. A straight edged bar of clean veneer runs two sides of a small room lined with hand made pottery that belongs in a gallery, clean walls that belong in a gallery and sake bottles that belong in our bellies. Our places are set with a small piece of coarse grain paper emblazoned with a watercolour cherry blossom topped with fine chopsticks resting on a small polished arch of stone. I lean over to Aki, ‘This place looks great Aki’. ‘I’m really nervous, I’ve never been in a nice place like this before’ comes his polite, very Japanese reply. In that one comment our journey into the fine point of beauty just became intimidating.

Sake comes to us in a rough green ceramic jug for us to pour out into our small bowls that are equally hand made pieces of art. First course of crabmeat if followed by fish sat in a well of broth atop a vegetable somewhat like a choko but with a reviving fresh flavour. To say that this dish is clean is not going far enough, it’s like a full body detox with a hint of fresh ocean spray like a spring seaside morning. The sake similarly dances in our mouths like a fine white wine but with the acid replaced by an alpine waterfall; there’s flavours all around but they elude names I can find leaving memories of feeling and emotions in their place. Aki is physically fearless on the rugby field but he’s decidedly unsettled now and this experience is beginning to show why.

Our detox is followed by the most elaborate plate of sashimi I’ve ever had, finally some flavours I can identify; at least I hope. It would be an insult to say that the fish melts in our mouths, that’s not true, each piece is the exact texture it’s meant to be as we feel the space within our mouths with an awareness like never before. Annoyingly each piece has some kind of marinade or seasoning I can’t find a memory for, the fish is there but kissed with a glint like reflected sun off a still pool. Again we feel and sense in place of the process we usually call eating. Aki is still nervous.  Second sake is from Aki’s home town, a slightly more vibrant version of a sour fruit that ends up being sweeter than you first thought and of course, there’s a different type of perfectly marred ceramic cup for this one. Grilled fish turns out to be the most expensive fish in Hokkaido and comes rolled up with the charred head staring straight to us and glistening in juices. It’s often said that in Japan everything is made into an art form; before us we have proof. Hokkaido is also the home of Japans best seafood, the cold waters produce an intensity of flavour not often found elsewhere; I never knew air could taste so refined. It’s fishy, salty, oily and a touch tart and at the same time it’s not quite any of these things at all as the flesh disintegrates faster than an uncooked meringue in our mouths. A salty kick resides for a moment in our mouths just as you think that fishy flavour might go a step too far to nurse our tongues to the safety of subsided flavour. Aki looks no more settled.

This is all too much, I need a bathroom but disaster strikes, I’m confronted by an array of buttons with no English; what if I press the wrong one? A few false starts send jets of water in curious directions but thankfully there’s no indoor fountain before eventually the relieving flush. Now it’s not only Aki feeling nervous. But the embarrassed nerves are mine alone and don’t last as we flow through course after course of evoked sensation rather than just flavour. We often sit in restaurants chatting about how we would do this at home, sometimes about how we might make it better, but that relies on having the first clue about what we’re tasting; here it’s beyond us. Sea urchin tops root vegetables and chives in a thick juice that is part ocean freshness and part woodland texture. Again we’re delightfully confused and Aki is perspiring notably. 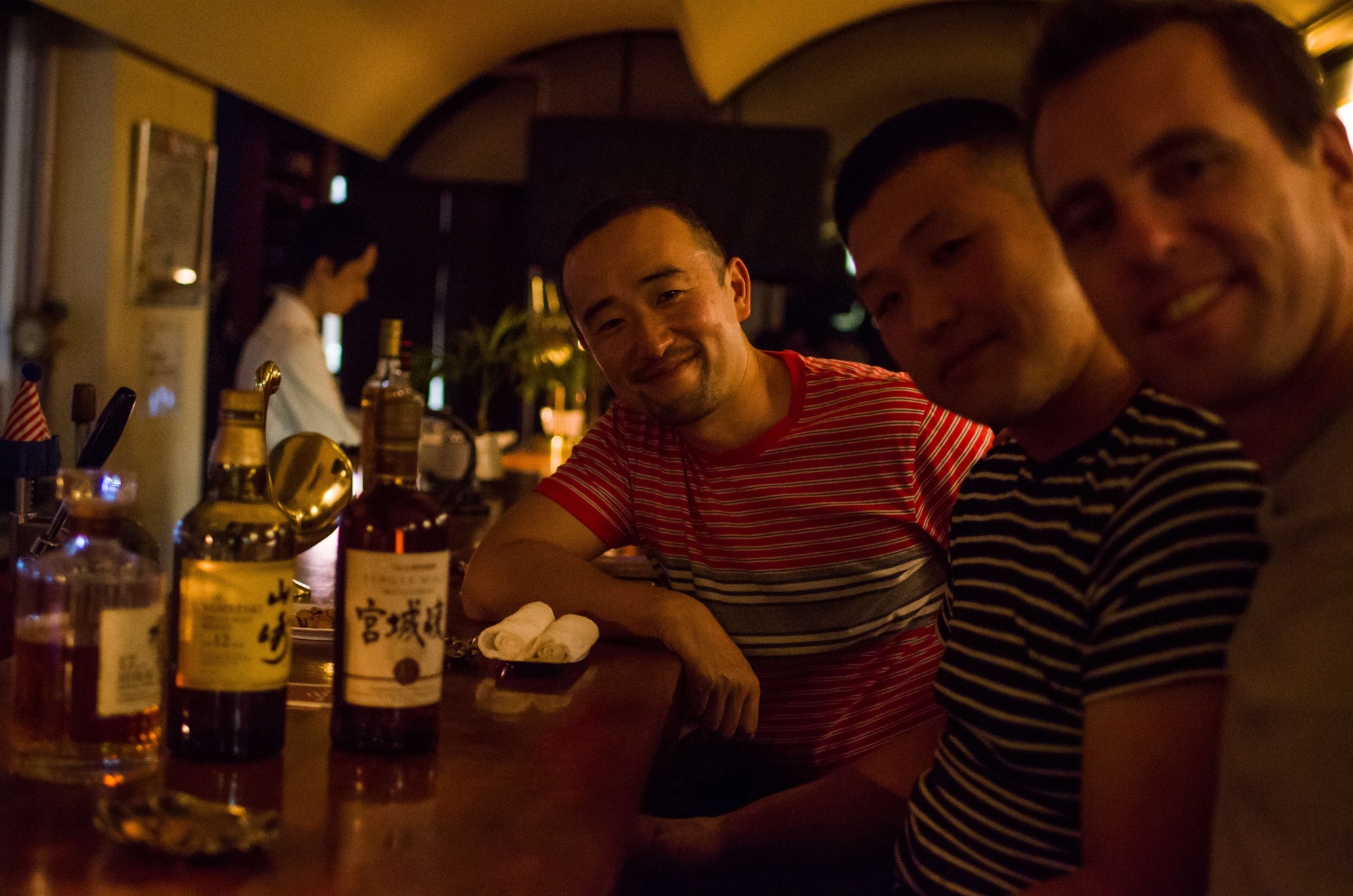 Ken, Aki, Steve and myself enjoying Japanese whiskey just to round off the wonderful experience, Sapporo, Japan.

But all good things do come to an end, seven courses later and we’re in a seventh floor bar tasting Japanese whiskey to reminisce on what just happened. Aki confesses to the reputation of the restaurant that only had nine customers for the night to place meaning to his nerves and gravity to our recollection, his desire for our satisfaction revealed as the source of his nerves. It’s an easy argument to make that the Japanese are the masters of seafood, if not food generally, placing us already in the uppermost wedge of the food pyramid. Take that Hokkaido is the home of fine fish in Japan and the upper point of the pyramid just got even pointier. In this uppermost few percent by just being in Hokkaido we were treated to the few percent of that few percent in what has a claim to possibly be among the best seafood experiences in the world.

Leave a Reply to stevecharlie