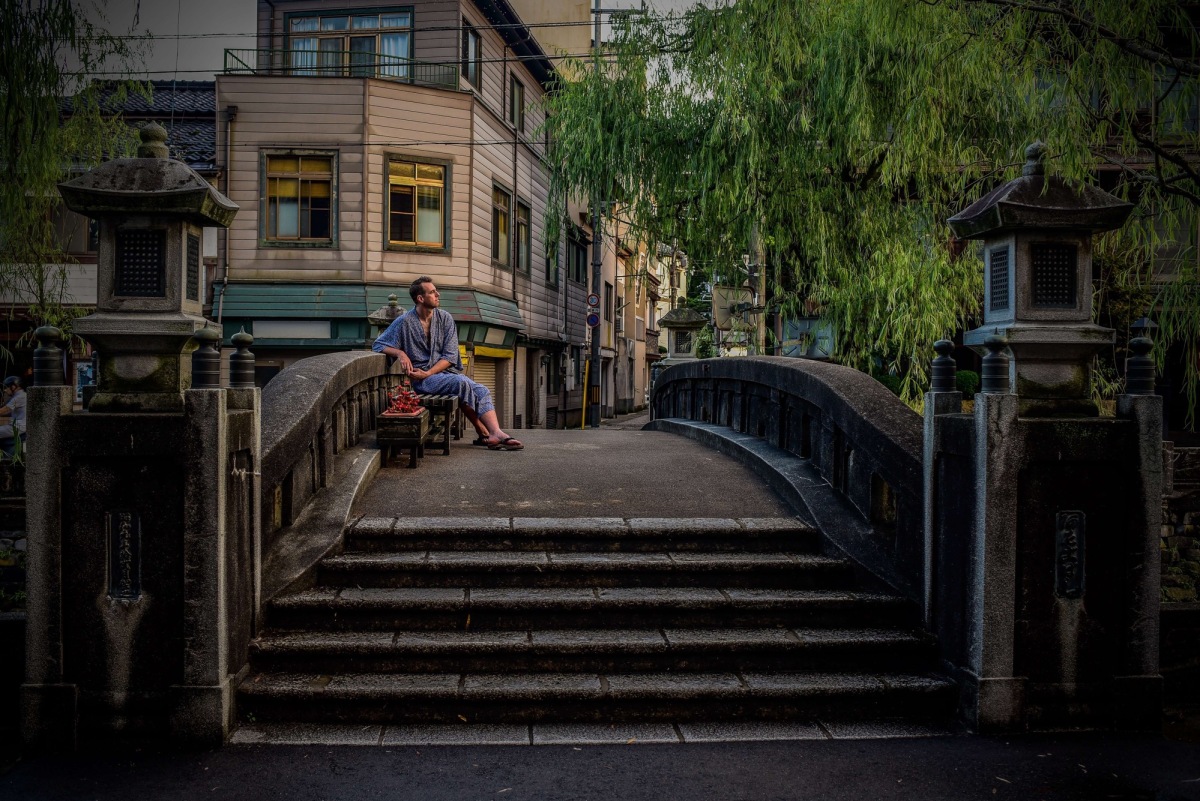 On rain slicked roads we walk the familiar walk, one backpack on the back, one on the front like a heavily pregnant hermaphrodite hermit crab. For so much of our time we attempt in vain to wipe clear any lingering stink of tourist cliche but on these ambling staggers from train station to accommodation there’s no strategy beyond owning it like a Christmas knitted jumper that seemed like such a good idea in front of the mirror that morning. Once again in the jaws of that public shame there’s an iPad held aloft to the world like some biblical scholar reading from a stone tablet to the unenlightened that refuse to; are yet to gather. Of course the place we are staying seems to be closed, the place we think we’re staying. A short dash to ask at a nearby shop and we’re eventually in to the place we thought was ours, then didn’t; the door closes behind us blessedly calling a halt to this oh so common parade of indignity.

We’re in Kinosaki-onsen, just now, the moment the door closed behind us signalled our arrival. So far in Japan we’ve stayed at traditional Ryokan’s for Charlie to pretend he can sit cross legged in comfort on the traditional tatami mats but we’ve successfully avoided the full weight of traditional beauty of a true Ryokan experience. We’ve also been to Onsen, or hot spring baths, but as yet haven’t entirely indulged in the waters that are as mentally therapeutic as they are restorative to our travel weary bodies. Stepping out of our shoes and into slippers we’re led into a reception room for a siphon coffee that’s made out of more beakers and flasks than I remember from high school chemistry. OK, I didn’t study chemistry at school to be fair but I have a fabulous imagination. From coffee to our room the Ryokan fantasy is a fantasy no longer.

Slippers off this is no Japanese cliche tight little room, a massive room is divided in half by bamboo and printed fabric curtains with our futon beds on one side and a small traditional table and seats in the other. Not a single unnecessary item clogs this minimalist expanse that leads through paper screen doors to a sitting room overlooking a willow lined canal arced by stone bridges. Beautiful as it is we’re not in the posh option, in fact it was the cheapest place we could find but money is so rarely necessary when elegance is as easy as breathing. In snippets and slices we have felt the unrestrained simplicity of traditional Japanese accommodations but a fuller picture has eluded us; until now.

As much as we could sit in the small bamboo chairs here for an eternity and watch the willows bow to kiss the waters surface, it’s time to gown up and soak in an onsen. One of the attractive features of Kinosaki, apart from the many onsen options, is that tradition has been held close in this small retreat of a town against the tyranny of convenience. After a short debate on whether we should wear undies under our kimono or not, boys kimono mind you, we’re robed up and slipping our toes through the patterned straps of our old style timber sandals. Exiting back through this sliding door from which we escaped the wretched walk of shame, we’re about to test out the cloddy timber sandals in full length patterned Japanese robes. We’re the definition of masculine. As for what’s under our kimono: does a Scotsman tell what’s under his kilt?

Walking to the onsen in our kimono and wooden slippers, Kinosaki, Japan.

With comically broad smiles we’re back through the door with our little towel bags in one arm like society ladies out for a spot of high street shopping feeling a little silly, or enlivened, who can tell. It’s safe to say that timber sandals aren’t the comfort choice but in short time we’re clopping along like a couple of show ponies on parade, short steps more like a dainty filly than the raging stallions we’d prefer to be. Fillies or stallions, one thing we are not is afraid of something new, we’re perched atop an arching bridge taking in the gentle sweep of the canal through this town lined with stone lanterns and dripping in old world charm. Every snippet of imagination, every image of gracious Japan comes roaring at us in a moment to make us feel both in place and horridly out of place at the same time. Are we gliding into a local culture or are we ascending to an even more shameful tourist cliche that we haven’t quite realised yet?

We aren’t afraid of new things and we aren’t quitters either. After a quick check that our kimono are suitably covering us it’s time to face the world and strut with pride; as much as one can strut with pride wearing a movement restricting kimono and timber sandals but I think we pull it off. A few metres is all it takes, a few metres to turn any lingering embarrassment into fun adventure. Yes we’re dressed like ladies, yes we have a dashing turquoise towel bag, yes we have the restricted gait of a fashion victim in bad shoes but we also have a town full of people we’re never going to see again; I think the expression is: check-mate. And the best part is that this novel feeling is far from a novelty at all, in just a couple of sweeping turns of the canal we’re strolling the old world of Japan in a style that is not only comfortable but subtly forces upon us the actions and emotions we chase. Timber sandals ensure a slow walking pace, there’s no pockets to be laden with phones, keys or wallets and the kimono is not an outlandish attempt at hipster fashion, just simplicity to remove pretence and vanity while being beautiful as the same time; I still don’t know how that happens but it does. 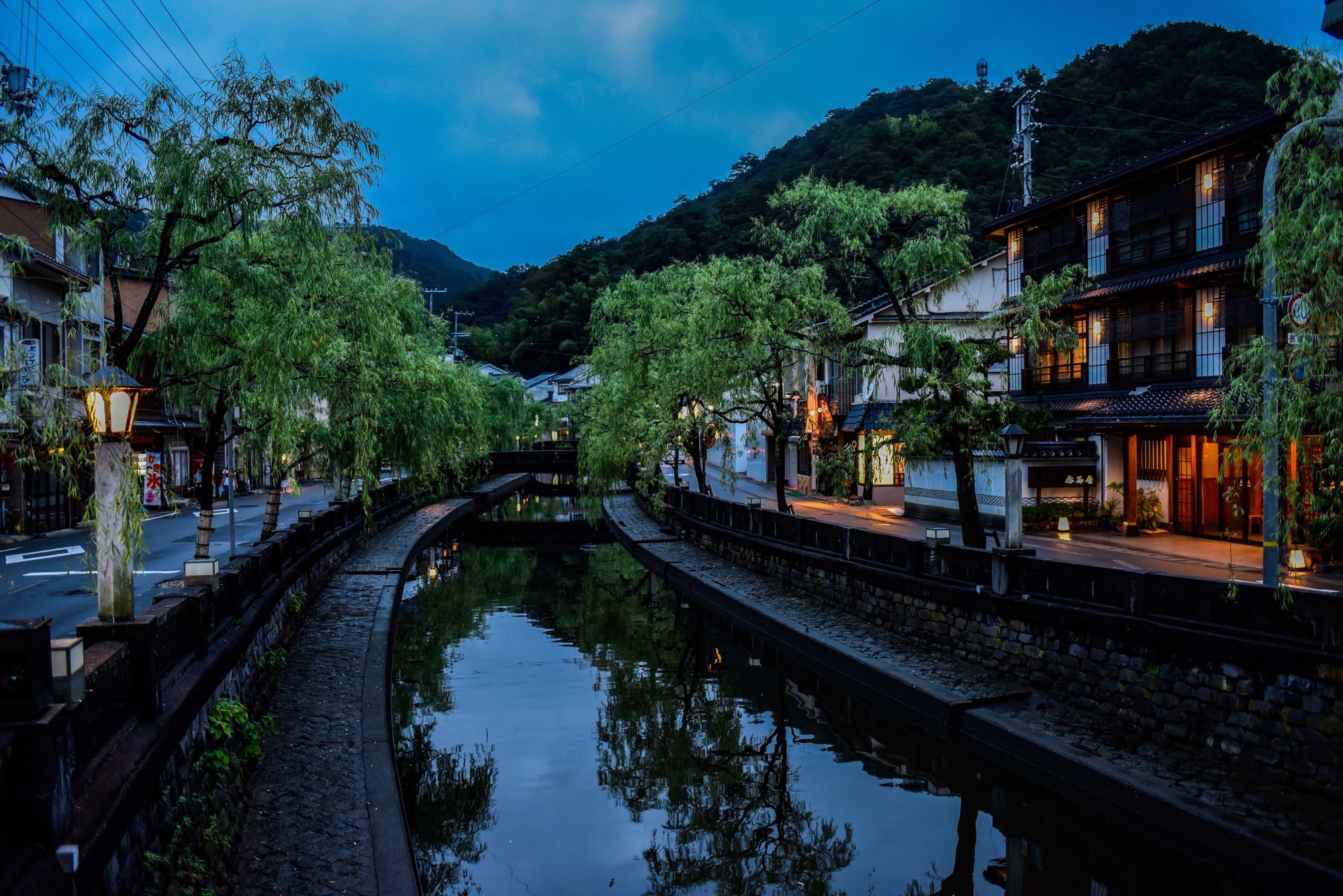 Into the onsen we’re again engulfed by the vanity crushing world of Japanese baths. History tells us that onsen are the place for honest conversation with nowhere to hide, as if the kimono in public wasn’t levelling enough. Twisting the key back from the locker we’re nude again and soon plunging into the restorative waters. We’re oddly alone with the baths all to ourselves, just Charlie and I, the two of us in a world where there’s nowhere to hide, with nothing that needs hiding. Sometimes silence is best. We search for the vanity, the shame, the awkwardness of today; we search for a care in the world to soak away but there’s nothing there, it must have all gone up with the steam that dances into the black night sky above.