After a day of walking the streets to soak up Havana much of the initial wonder has only been reinforced, it’s all a little bit luscious. The people are luscious, the buildings are luscious, the streets are luscious, the food… not so luscious but it’s not too bad either.
But lets start from the beginning, where the hell have we woken up, the Casa we’re staying at is outrageous. The ceilings are about 5-6m high, we have grand antique furniture with glowing dark timber and a gaudy crystal chandelier in our room. Oh, and it’s fluro orange with matching curtains, thank god we didn’t drink much, if there’s ever a room not to have a hangover in this is it. The furnishings and decorations in this place are gaudy, elaborate and lavish, it’s obvious there was a serious amount of cash here at some stage (The Spanish pre-1898). The old style grandeur of the furnishings is set off by a colour palate that belongs on Romper Room. Our fluro range cuts to iridescent green in the dining room which throws to bubble gum pastel purple in the next. It’s brash, vivid and like everything here it’s a style of its own, indeed nothing in Cuba doesn’t have a style of some sort. 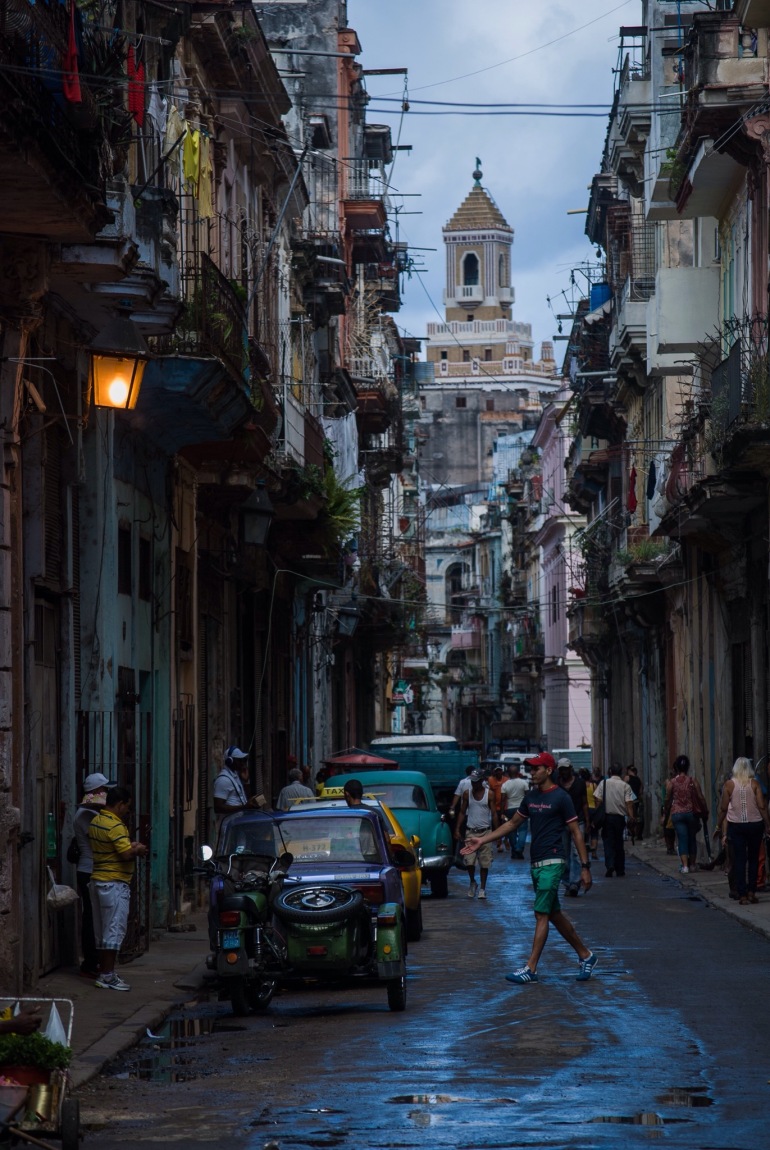 We ventured out of the relatively comfy enclave of the historical area that caters for tourists quite well and into the more gritty streets. One of the first things that hits us is that there’s a massive amount of restoration works going on. Where much of this city seems quite run down, there’s a humming vibe of rebuilding to reclaim the historical glory of this place. Apparently this is in part driven by the tourist dollar and the two currencies here. There’s a tourist currency and a local currency, the tourist currency is 25 times higher than the local. So in short, we pay the same ‘numbers’ for things but the tourists pay 25 times more, ouch. That said, things are still pretty affordable (about $40AUD for a big meal of various seafood and beef with salads and rice with four mojitos) and the evidence of where it’s going makes the whole deal quite palatable.
It can’t be a comment about Havana without mentioning the music and the social interaction here, you simply cannot be alone in Havana. The music is nothing short of breathtaking. Every restaurant seems to have a musical ensemble and from a violin/ guitar duo to two guys that played guitar and had voices like honey and chocolate. The standard of musical talent here is phenomenal, we see ‘finalists’ of talent TV shows that are simply rubbish at home, there’s locals kicking around in bars that are just…. wow… WOW! So you appreciate music, it’s pushed so welcomingly into your consciousness here, it can’t be avoided and drives a vibe that pulses in this town.
And there’s the other type of social interaction, everyone has something to sell; everyone. With the two currencies, getting a few tourist bucks is a big windfall so you need to be really decisive with your interactions. The locals here are a suave lot, generally when you get your denial across you get a warm gracious smile and and fond farewell. We did however get one dude that stuck to us like glue. We needed to fake a taxi ride home to shake him off, he was not going anywhere. With quite a few firm and repeated demands we managed to get out and cut the ties, that wasn’t a great one but part of the deal I guess. Generally though it’s just a matter of not being pushed around and you’re all good.