On our travels we’ve heard Havana described as beautifully broken, a very apt expression. I’ll go with another metaphor though, Havana in many ways seems to me like a troubled youth. As we attempt to take in Havana we feel like we’re only allowed to see from the outside, this old city is at this moment in time displaying youthful defensiveness from past hurts, so long extricating itself. I’ve found it hard to really put my finger on why Havana is so appealing, and it’s this mysterious allure of a troubled youth, so often exploding with talent and potential, that seems to give such captivation and frustrating evasiveness. I have within me a feeling so much closer to home, a person close to me that has forever provided this contrasting and emotionally charged response, yes Havana is a tempest untamed. As with my troubled subject we have a well of potential and raw talent to inspire poetry for so long gentled by a haze of distraction and sabotage, both external and internal. We are also privileged to see Havana in an embryonic burgeoning of colour where raw talent still bubbles under the first blushing steps from self imposed pathos exile.

As the tempest spins, the world looks on as this exciting prodigy removes its emo facade and begins interacting, breaths are drawn. The potential and raw talent I allude to are obvious, the beauty of the buildings and street-scapes that refuse to be collared into western aesthetics, this youth artfully refuses to adhere to the school uniform. The music and dance seemingly evade the most formal tuitions welling up from some instinctive and organic reserve that the rest of us just don’t seem to understand yet can’t resist being swept away by. A sense of style that seems rebelliously jarring and can only be appreciated with its intended backdrop. Yes Havana throws you into a barrage of sensory and experiential evocation that bypasses intellect and emerges assaultingly in your heart and gut, you have no idea how it got there, but there it is. These unorthodox explosions are all the more powerful for the lack of formality, they’re all in themselves familiar concepts but so much more impacting for their abruptness in presentation.

Don’t we say that true genius is never realised in its own lifetime? With all this potential and allure, there’s a flipside to this gem, it’s nothing short of a frustrating pain in the ass sometimes and you just want to slap it stupid. As with a troubled youth it’s not often difficult to scratch into history to easily see where the well of these difficulties had sprung, but challenging they are none the less. With a very recent melding of capitalist ethics layered onto this very communist of states, private business and the tourist dollar are now on offer. Havana with all its suave and talent seems ungainly and aggressive in playing with others. The invasive advances every 10 minutes, the misleading challenge of finding food and the unrelenting demand for money to pay for things that aren’t services at all simply make you want to scream at Havana while you stand agape at how wonderful it is, and how spectacular it surely will be. 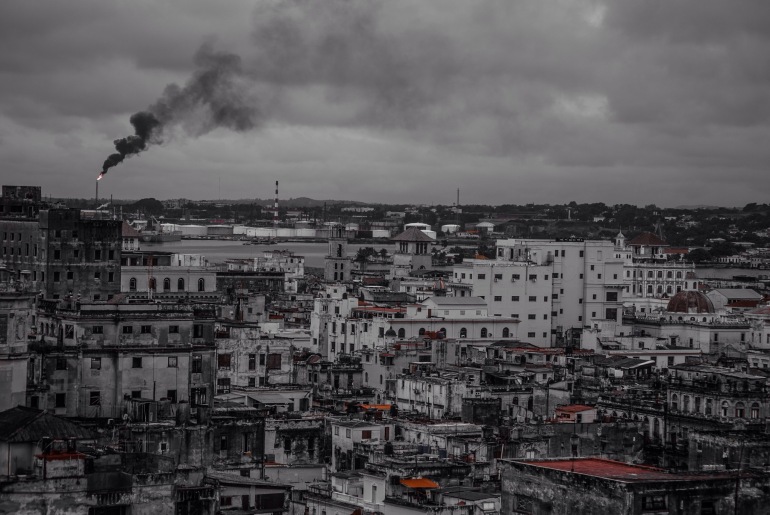 In attempting to deliver Havana to the page I can only resist clear description, colours, images and scenes, it seems an injustice. For as a tourist for a short time, Havana exists not within what you see and what you can intellectually process, Havana remains an elusive idea, indeed a troubled youth. You want to get to know it but it won’t really let you, it’s history building up a toughened skin that is only known to itself. But then you see the escaping elements of wonder that make you stay the hand of judgement, you discard righteousness to what is right and take the emotionally challenging step to appreciating when you can’t locate what to appreciate. Feelings on Havana remain thus, unresolved, conflicted and with a drastic lack of resolution that only inspires a mind spinning admiration. Havana, you kill me but I think I may just love you.