It’s time to don the tourist hat and go catch some ‘must see’ sights of this area, and of course in this part of the world, they’re ruins. In our sights are the sun and moon temples (las Huacas Del Sol y La Luna) and the city of Chan Chan, all of which are pre Inca, dating from the years 700A.D. for the temples up to about 1300 for the temples and up to 1300 for Chan Chan, the largest pre Incan ruins in the Americas. So with team Poland in fine form we bustle off to see what must be seen. First stop is the museum which is, like everywhere here, stuck in the middle of an unforgiving desert nestled beside the rearing temples of the sun and moon. We have a guide for this one and to have the images, artefacts and cultures explained paints a real picture, it all happened in this area. Human contest and sacrifice were a strong part of the iconography here with many items displaying the defeated combatants bound and naked being marched to their deaths, drunk on hallucinogenic cactus till the end.

Museum done, the first thing we note about these structures is that they’re not stone, they’re adobe brick. Forming the bricks from clay, sand and some sort of binding agent from a local Cactus, these blocks of sand have withstood the rain and elements for over 1500 years. The simplicity of this construction balanced with its longevity is mind boggling: I wonder if our houses would stand that long? Although quite dilapidated now, the temples are still huge and still intact enough for us to make our way through to view the alarmingly intact inner frescoes and murals. This venture is not as pretty or spectacular as other ruins we’ve seen but for sheer unbelievability, they’re probably leading the pack. We cast our eyes over the valley space between the two temples, the former city of an empire that was now melting into irrelevance before our eyes. 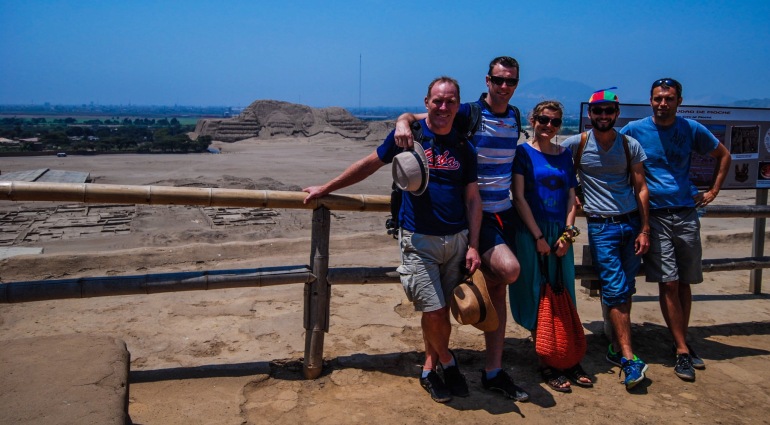 While the sun and moon temples are jarringly inspiring, a triumph of possibility, Chan Chan is sadly in not so good a state. With just a few of the most prominent palaces the only forms that seem more than termite hills, the sprawling space of 14 square kilometres again permits the mind to ponder the grandeur that was. Now for all the closet greenies of us, it turns out that much of this desolate valley was liberally covered in Cacao trees. Archaeologists believe that the trees were felled without replanting which has led to the desolate landscape we see today, not to mention not helping the civilisations existence.

As a quick aside, we are stopped numerous times by giggling groups of girls for photos; photos with them, not just the usual ‘can you take a photo of us’. It appears the oversized guys are quite a novelty here. We shrug off the freak-show aura and embrace what will possibly, nay definitely be the only time in our lives we feel a little like Hugh Jackman. It’s all quite funny really, we’re set off on our days in a slightly better mood than we were before.

Taking in the mentally transporting journey that is Chan Chan we notice a lot of craftsmen restoring the ruins which prompts the very conflicting nature of this place. Peru has funding from UNESCO for the preservation of these historically significant sites, but it comes with a catch, to receive the funding, it must be left as it is, not restored. On one hand this makes perfect sense, to preserve and maintain a culture and society it seems only relevant to maintain what was of that culture, not make a new replica, right? On the other hand, any casual observer can cast a glance around and see what is to become of this most significant of assets if left unattended, nothing but termite mounds at best. 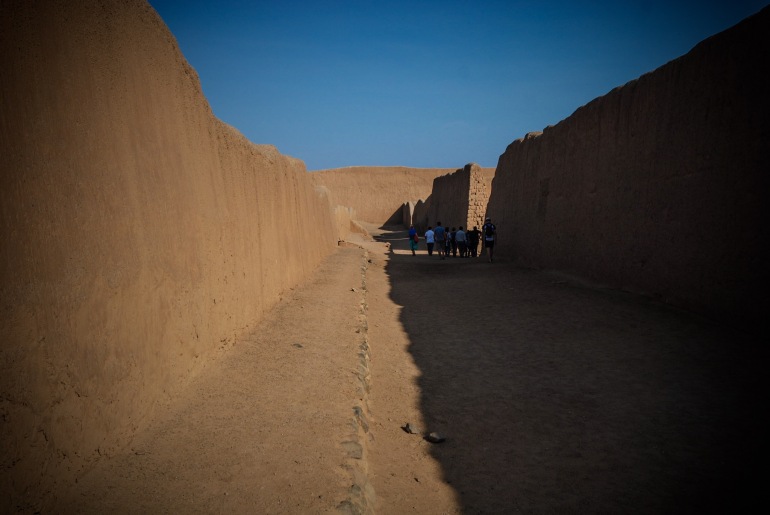 So as we return to Huanchaco, we’re conflicted. This dilemma is a little sad and disarming, on one hand the value of ruins are held in what they are, a survival of the past not a modern replica. But on the other, the value of this site is also relevant beyond the structures, allowing it to become plain desert does a disservice to this regions history. Does an asset like Chan Chan retain value if its value is only perceived in building it again?